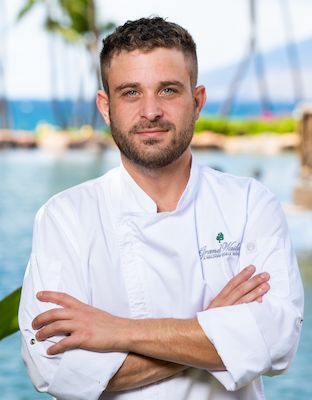 In his new role, Executive Chef Ryan Fox will oversee the day-to-day culinary operations at the resort’s award-winning restaurant, set amid an idyllic beachfront lagoon, while leading his culinary team and curating new menu items to provide a one-of-a-kind dining experience for guests.

Fox brings over 13 years of fine dining experience to Grand Wailea, with a focus on French Eclectic and Pacific Northwestern cuisine. Most recently, he was the executive chef at Nomad.PDX, a restaurant he founded in 2014 in Portland, Oregon. While in Portland, Fox earned a James Beard Rising Star Chef Nomination, and his restaurant was awarded and recognized by Portland Monthly Magazine, Eater, Thrillist, BuzzFeed and more. He studied at the Culinary Institute of America and is also a certified Sommelier.

“We are thrilled to welcome Ryan to our team at Grand Wailea,” says JP Oliver, Grand Wailea’s Managing Director. “His long list of accolades and experience in some of the country’s most lauded restaurants make him a great fit to lead Humuhumunukunukuapua’a. We look forward to bringing his expertise and industry knowledge on board to help support the continued success of our restaurant and resort.”

The iconic resort consistently ranks among the world’s best in leading travel and consumer reports. Nestled on 40 acres of lush, tropical gardens fronting Wailea Beach, Grand Wailea provides a range of vacation experiences: open spaces for the active vacationer, beauty and seclusion for romantic getaways, and family fun with rope swings and a jungle-style river pool. Guests also have access to a new, intimate spa experience Mōhalu by Spa Grande, as well as eight restaurants, including the award-winning “Best of Maui” Humuhumunukunukuapua‘a. Accommodation options include Grand Wailea’s 776 rooms and suites and an enclave of 51 luxury villas Ho`olei at Grand Wailea ranging from 3,200 to 4,000 sq. ft., located nearby with access to Grand Wailea amenities. For information on what is currently available/open on property, please call 1-800-888-6100 or visit www.grandwailea.com