Atlanta – May 29, 2019 – The U.S. lodging supply will increase at an annual pace greater than the long-run average through 2022, according to CBRE Hotels Research’s latest report.

Meanwhile, the annual rise in the demand for these new hotel rooms is projected to average roughly three-quarters of its respective long-run average. The result is declining occupancy forecasts for the U.S. lodging industry in both 2020 and 2021.

“Given the cyclical nature of the lodging industry, it is expected that hotel owners will realize a bit of a slowdown after 10 consecutive years of occupancy expansion,” said R. Mark Woodworth, Senior Managing Director of CBRE Hotels Research. “Despite the anticipated declines, the national occupancy level will remain at least 200 basis points above the long-run average through 2023. This provides a cushion should economic and market conditions take a severe turn for the worse.”

Richard Barkham, Ph.D.,CBRE’s Global Chief Economist and Head of Americas Research, explains the company’s outlook for 2019: “U.S. economic growth in 2019 will be more moderate than in 2018, but it can still be considered good. In fact, alongside the U.S., global GDP growth numbers surprised on the upside during the first quarter. This bodes well for the rest of the year, despite the notable increase in trade tension. Globally, and in the U.S., consumer confidence remains high.

“The forecast economic slowdown that is expected to hit in late 2020 will be a reaction to higher interest rates, exacerbated by equity market corrections, credit market problems and international geo-political factors,” Barkham added. “Fortunately, the slowdown should be relatively mild and quick.”

CBRE’s forecasts for GDP growth improve to 2.7 percent in both 2022 and 2023. Accordingly, the firm’s projections for lodging demand surge to 2.4 percent and 3.3 percent, respectively, for those two years. “The lodging industry recovery from the economic slowdown will be very strong. Occupancy levels will once again surpass the 66.0 percent mark by 2023,” Woodworth said.

Concentrated Supply Given the record occupancy levels observed for the past four years, CBRE Hotels Research has focused on the factors that could potentially cause a downward inflection in the business cycle. “Oversupply has certainly been one of those factors,” noted John B. (Jack) Corgel, Ph.D., professor of real estate at the Cornell University School of Hotel Administration and senior advisor to CBRE Hotels Research. “While our forecasts for national supply growth from 2019 through 2022 exceed the STR long-run average of 1.8 percent, the new hotel rooms are concentrated in just a few markets. Therefore, most markets will realize limited increases in new competition and likely won’t experience a meaningful slowdown in performance.”

“The concentrated supply growth not only impacts occupancy, but average daily rate, as well. In the markets with the highest concentrations of new supply, ADR growth will remain below the pace of inflation each year from 2019 through 2022. Conversely, the markets with relatively limited supply growth will achieve ADR growth in excess of inflation each of the next four years. This amplifies the reality that lodging is a street corner business, and you must understand local economic and market conditions,” Woodworth noted.

Maintain, Not Growth The combination of declining occupancy levels and muted ADR growth results in limited RevPAR gains for U.S. hotels the next few years. CBRE Hotels Research forecasts U.S. national RevPAR growth rates of 2.0 percent in 2019 and 1.8 percent in 2020. In reaction to the 2020 economic slowdown, the national RevPAR level is projected to decline by 0.5 percent in 2021, the first such decline since 2009. The lodging industry recovery begins in 2022 with a 1.3 percent rise in RevPAR, followed by a very strong increase of 3.8 percent in 2023.

“Certainly, these forecast RevPAR changes are shy of what they have been over the past nine years. However, we continue to remind industry participants that occupancy, profit margins and operating cash flows are at extremely high levels. If owners and their operators concentrate on revenue management, channel management, property maintenance and expense controls, they can continue to earn strong returns and preserve value while riding out the slowdown,” Woodworth concluded.

The June 2019 edition of Hotel Horizons®for the U.S. lodging industry and 60 major markets can be purchased by visiting: https://pip.cbrehotels.com/ 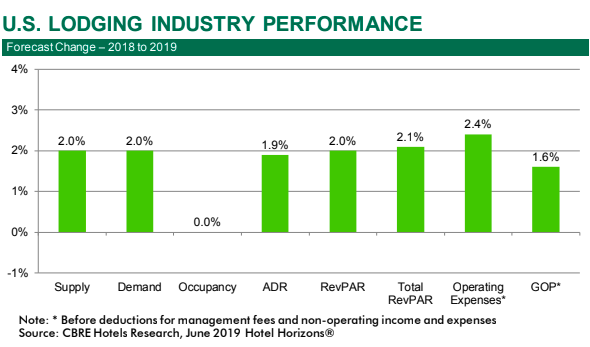 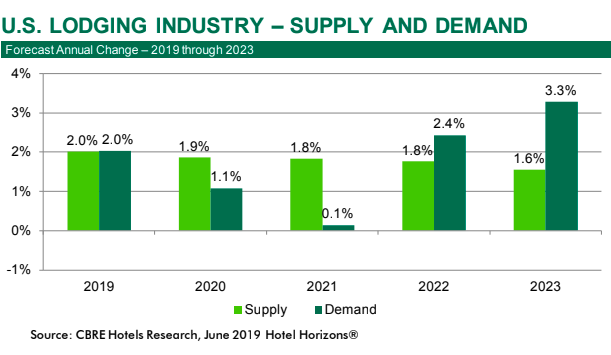