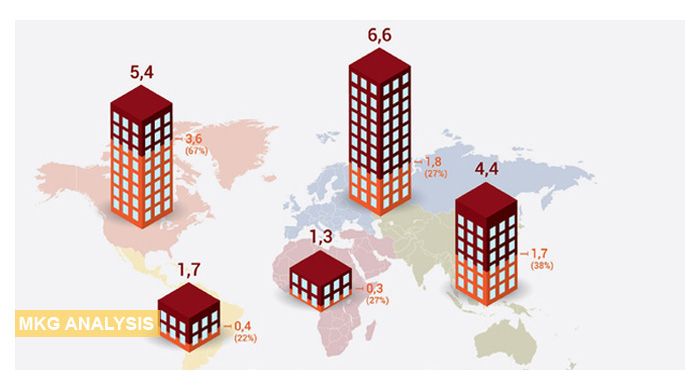 Once again, hotel groups acted as the main growth engine. On the period, the 3.2% growth of the branded hotel supply made up for the contraction of the independent supply on some mature markets. With some 240,000 additional rooms, the chain supply thus reached 7.85 million rooms on January 1, 2014. Growth in the branded supply was supported by the dynamism of leading hotel groups on the international scene, where they are diversifying geographically to balance risk. Given the maturity of most developed countries, emerging markets continue to be the key growth feeders, with Asia Pacific in the forefront (+11.5% growth in its chain supply). This year, the Middle East & Africa region (+7.2%) was also a focus of international attention, alongside Latin America (+3.8%) with Brazil as a focal point. While together they still account for close to 70% of the chain supply, North American and European continents continue to lose market shares from one year to the next.

MKG Hospitality’s global ranking of hotel groups in terms of number of rooms clearly shows the supremacy of Anglo-American groups and their lead on the other sector actors. InterContinental Hotels Group remains in first place in the ranking, with Hilton Worldwide (2nd), Marriott International (3rd) and Wyndham Hotel Group (4th) close behind. Each of the top four groups worldwide has more than 645,000 rooms in operation. It is especially noteworthy that all the groups in the Top 10 showed growth in their supply. Georges Panayotis, CEO and founder of MKG Group, explains: “Major hotel groups are in a race for growth to resist growing pressure from tech and web giants, with respect to which they must reach a critical size.”

The soaring growth of the group Home Inns (more than 42,000 additional rooms in one year), meanwhile, testifies to the expansion of Asian actors in the global supply, which in the long term could change the global picture for the world leaders. Inversely, only two European groups are able to create a place for themselves among the Top 10, whereas the continent is the leader in terms of global supply and second in terms of chain supply.