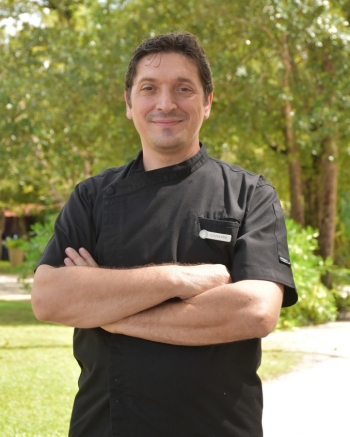 With a storied culinary career spanning four continents, Executive Chef Giuseppe Pucciarelli brings an exciting new international perspective to Four Seasons Resort Langkawi. For nearly 30 years, he has honed his craft in diverse kitchens around the world, from Italy, Portugal and the UK, to worldwide cruise liners, to Doha, Egypt and Turkey.

A globetrotter with a passion for farm-to-table cuisine, Chef Jo (as he is popularly known) is now scripting a delicious new chapter at the luxurious island Resort. Expect a bevy of fresh and engaging dining experiences, including the newly launched Chef’s Breakfast – already a hot favourite among Four Seasons guests.

“Along with the breakfast buffet, we have introduced a selection of hot dishes that arrive straight from the kitchen to your table,” explains Chef Jo. The globally inspired menu includes specialties such as French Toast Tiramisu, Vegan Scrambled Eggs, and Morning Glory Eggs Benedict – a combination of poached eggs with Malaysian elements such as signature ribs, morning glory and sriracha.

Growing up in southern Italy, near the Amalfi coast, Chef Jo developed an early respect for fresh, wholesome produce. “My family grew their own vegetables, raised their own chickens and made their own olive oil. In fact, they still do!” he says with a smile. “Knowing the origins of every ingredient brings true joy to cooking and eating.”

His love for great ingredients is the spark behind a slew of upcoming initiatives at the Resort. The team is currently expanding the in-house kitchen garden to grow a variety of organic herbs, spices and vegetables, which will then make their way into menus across all outlets.

Chef Jo is also in the process of tying up with small farmers around the island, with a view to directly sourcing the best of local produce: “The black honey found on Langkawi is incredible! So are the tropical fruits – the mangosteen and longan here have a distinctive taste, which we are working to incorporate into new dishes.”

As part of ramping up the Resort’s culinary identity, Chef Jo is marrying international recipes with Malaysian flavours, elevated by his own experiences around the world. At Kelapa Grill, diners can discover delicacies from lands both near and far; think China, Mexico, Peru and Portugal. “The idea is to get out of our comfort zones and create dining experiences that captivate, surprise and delight our guests,” he notes.

Prior to joining Four Seasons Resort Langkawi, Chef Jo was the executive chef at a high-end luxury resort in Turkey, overseeing an impressive portfolio of more than 20 dining outlets and bars. Before that, he served as executive sous chef at multiple properties, including Four Seasons Hotel Alexandria and five-star properties in Doha and Lisbon. He also spent three years working aboard luxury cruise liners, an experience that taught him the unparalleled value of creativity and resourcefulness.

Now, in his new home, he is looking forward to immersing in Malaysia’s legendary street food culture and exploring the Langkawi’s natural wonders – from trekking in rainforests to kayaking through mangroves. “Being out in nature frees the imagination. As a chef, I find that the simplest things often prove to be my greatest inspirations,” he says.