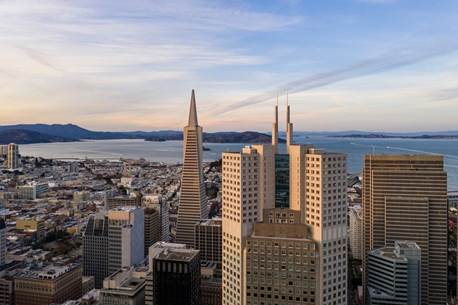 San Francisco, USA, March 9, 2020 – Boasting the area’s best views of the Golden Gate Bridge, the Bay and the glittering city below, the new Four Seasons Hotel San Francisco at Embarcadero is now confirming arrivals beginning May 1, 2020. Located on the top 11 floors of the 48-storey 345 California Center in the heart of the city’s Financial District, the hotel will reopen this spring after extensive enhancements as a Four Seasons experience.

“As Four Seasons continues to grow its diverse and dynamic California Collection, we are delighted to offer a new vantage point from which to enjoy one of America’s favourite cities,” says Vince Parrotta, Four Seasons President, Hotel Operations – Americas West. “And further, it is my great pleasure to introduce Bob Megargle, General Manager of the newest luxury address in the city.”

Robert Megargle was most recently the Hotel Manager at the original Four Seasons Hotel San Francisco on Market Street and in 2016 was the first hotel professional to be named to San Francisco Business Times’ “40 Under 40” in recognition of his leadership. Prior to his arrival in the city in 2014, his tenure includes positions in Maui, New York and his home city of Detroit.

“This Hotel truly has a modern design perspective that’s enriched by stunning views and brought to life by our amazing people,” says Megargle. “With the city continuing to set an inspiring example for growth, we fit right into the heart of the action and look forward to strengthening our connection within the community.”

In preparing for the Hotel’s debut as a Four Seasons this spring, interior design firm Marzipan was inspired by key moments in the region’s history and symbols of the city itself. All 155 rooms and suites have been completely redesigned, with new natural wood floors, modern furnishings, a warm palette of textures with surprising splashes of colour, deep soaking tubs and flexible floor plans that allow guests to truly make themselves at home. And, every room boasts stunning panoramic views.

In addition, Four Seasons Hotel San Francisco at Embarcadero will offer a street-level restaurant and bar, 24/7 fitness centre and business centre. Located in the heart of the Financial District, the Hotel is also steps away from Union Square, the Embarcadero waterfront and Fisherman’s Wharf. A 24-hour concierge team can assist with trip planning, whether enjoying a family vacation in the Bay Area, a romantic weekend getaway, or even a few hours of leisure during a business trip.