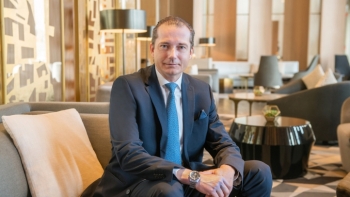 Having joined the Hotel in 2021 – following 25 years’ experience of international luxury hospitality, including 13 years with Four Seasons – Kipping has helped steer the company’s Kuwaiti icon through its most challenging period to date. He is now poised to lead the Hotel into a new era of excellence, driven by Four Seasons vision of delivering modern luxury with heart, through meaningful guest experiences that honour cultural connection and support sustainability.

“Kuwait has such a sense of proud heritage,” comments Kipping. “From the old souks to the Grand Mosque, great museums to an impressive amount of contemporary art, there are so many fascinating cultural components to explore. I’m privileged to lead a prodigiously talented team committed to sharing our destination’s stories through personalised touches of thoughtfulness and care.”

Kipping is one of the industry’s consummate professionals. A gifted communicator who is fluent in German, English, Spanish and French, he has long been captivated by different cultures. Raised near Cologne, the cultural capital of Germany’s Rhineland, Kipping spent summers exploring Europe with his family, while his love of art saw him toying with a career in architecture. An early tenure at London’s The Dorchester inspired his vision of luxury leadership and led to studies at Switzerland’s prestigious Les Roches School of Hospitality. Since his first Four Seasons move to Washington in 1997 as Restaurant Manager, he has crafted an extraordinary résumé spanning management roles for high-end brands in North America, Latin America and the Caribbean.

The values and familial culture of Four Seasons drew Kipping back to the fold, this time to Kuwait. Set in the heart of the city centre, with an urban sanctuary vibe, the award-winning Hotel taps into the Kuwaitis’ passion for luxurious – and innovative – hospitality, delivering an exquisite blend of cutting-edge design alongside a stellar international collection of contemporary art. Spectacular outdoor spaces – exciting for such an urban location – combine wide-reaching city and park views with breath-taking architecture by Gensler of San Francisco, interiors by Yabu Pushelberg of New York, and a world-class Spa and Hammam. In line with the Kuwaitis’ discerning appreciation for fine gastronomy, global culinary creativity from Milan to Tokyo shines through five restaurants and lounges serving everything from innovative Far-Eastern cuisine to Arabic and Japanese specialities and fine chocolaterie.

Having worked in different environments across various cultures, Kipping is excited to merge the program-driven aspects of resort environments with the business background of city properties. Under his direction, guests can look forward to even more inspirational immersions in Arabic culture including explorations of culinary delicacies, falconry, and winter camel races, as well as Concierge partnerships that reveal Kuwait’s hidden gems.

Sustainability is also key to Kipping’s ethos and leadership. The Hotel is on track to make its guest rooms plastic-free by the end of the year, while further initiatives – including enhanced support of local producers and an onsite water processing site – are in the pipeline.

Underpinning it all is Kipping’s skilled and respectful management of the Hotel’s 400-strong team. “We have more than 43 nationalities here so it’s key for me to create an environment where people feel connected as part of the Four Seasons family,” he reflects. “From this strong foundation, we aim to offer guests a truly outstanding experience that cements Four Seasons as the leader in its field, shaping a new vision at the forefront of the luxury hospitality industry.”

For further information or to connect to the culture of Four Seasons architectural Kuwaiti marvel, contact 2200 6000.