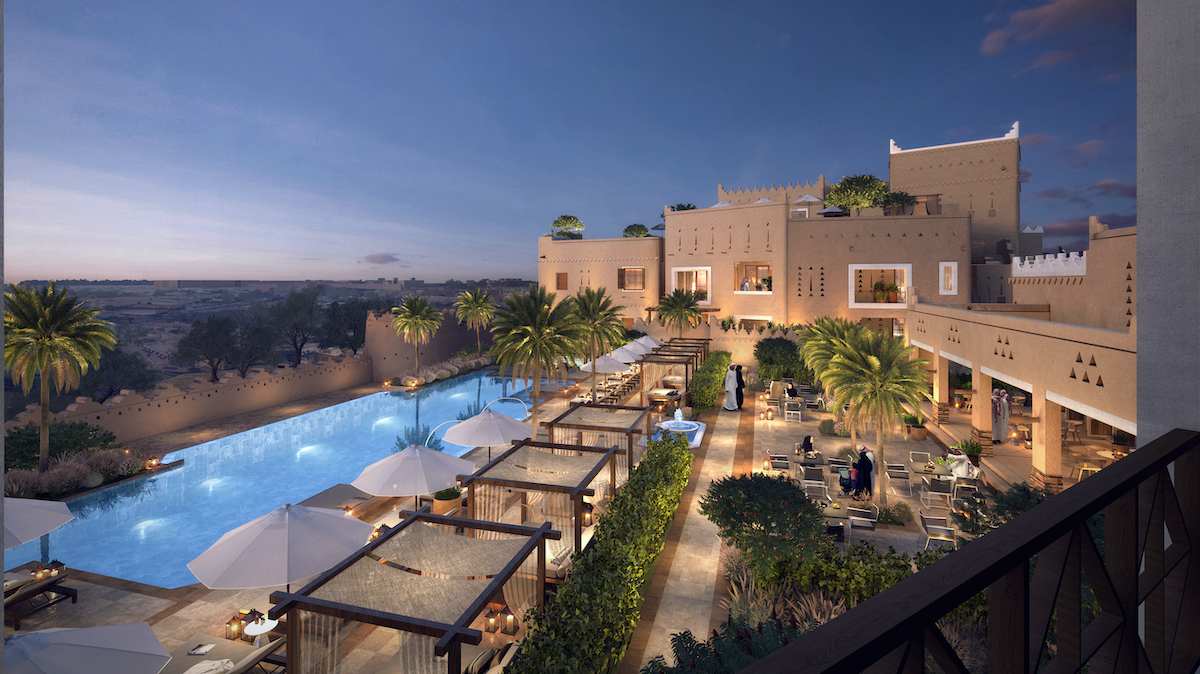 A 300 year-old site located just outside of Riyadh, Diriyah is considered to be the birthplace of the Kingdom and the capital of the first Saudi state. The area is home to the UNESCO World Heritage Site, At-Turaif, the valley and lush palm groves of Wadi Hanifah, and will soon include the Diriyah development – an acclaimed project that pays homage to the history of Saudi Arabia. Located 15 minutes from the centre of Riyadh, Diriyah will comprise 13 unique districts inclusive of residences, hospitality offerings, office space, retail, museums, cultural institutions, outdoor attractions and more. The development is a key driver of the Kingdom’s Saudi Vision 2030.

“It is a delight to be partnering with Four Seasons. Renowned for their unforgettable guest experiences, Four Seasons is working alongside DGDA to elevate what travellers can experience within Diriyah, showcasing their timeless approach to hospitality whilst staying true to Diriyah’s rich cultural past. We are excited to share further developments on this project in the coming months.”

The Diriyah development will become one of the Middle East’s most walkable, pedestrianized cities, and upon completion will be the world’s largest cultural and heritage site. It has been designed to honour the heritage of the area with traditional Najdi architectural design principles, including low-rise, compact and organic architecture, rooftop terraces, decorated doors, and large courtyards. Each district within the development will be highly walkable with easy connections to the sights and attractions within the area.

“Diriyah is an exceptional project that speaks to the tremendous growth and economic development in the region, while remaining deeply rooted in the destination’s historic and cultural past,” says Bart Carnahan, President, Global Business Development and Portfolio Management, Four Seasons Hotels and Resorts. “Saudi Arabia is an important growth market for Four Seasons, and we are proud to be part of Diriyah’s exciting future. We look forward to partnering with DGDA to bring the Four Seasons luxury experience to life within this iconic, landmark development.”

The Hotel will be located adjacent to Diriyah’s culturally rooted district along the Wadi Hanifah escarpment, with incredible views towards the west and the UNESCO World Heritage Site, At-Turaif. Inspired by local tradition, the Hotel design will have a unique aesthetic that is being developed by leading design architects, Aedas and Elastik interior designers.

Diriyah is set to become Saudi Arabia’s foremost historical, cultural and lifestyle destination. Chosen by the Arab League Educational, Cultural and Scientific Organization as the Capital of Arab Culture for 2030, as part of the Kingdom’s 2030 Vision, 11 square kilometres of Diriyah will be transformed into one of the world’s foremost historic tourism destinations.

Diriyah is located within Riyadh province, just 15 minutes north-west of Riyadh’s city centre. It is recognised as a symbolic centre of inspiration for the generations of leaders that have led the Kingdom since the foundation of the first Saudi Arabian state on 22nd February 1727.

As the renewed cultural and historic capital of the nation, Diriyah will be designed and built with Saudi traditions and heritage in mind. The mixed-use traditional urban community will be created in an authentic Najdi architectural style, typical of Saudi villages of centuries past. Sitting at the cultural heart of Diriyah lies the historic city of At-Turaif. Built in 1766, At-Turaif is recognised as one of the world’s foremost mud-brick cities. Designated as a UNESCO World Heritage Site in 2010, it is today set to become one of the nation’s must-see historic destinations.

With cultural and lifestyle experiences at its heart, Diriyah will be enriched by entertainment, learning, shopping, dining, hospitality, residential and workplace offerings. On completion, it will be home to a population of 100,000 residents, workers, students and visitors and will celebrate the rich cultural history of Saudi Arabia.

The development will feature an array of world-class cultural, entertainment, retail, hospitality, educational, office and residential areas, including 38 hotels, a diverse collection of museums, a bustling retail heart and over 100 places to dine. The existing Bujairi Terrace will soon be home to Riyadh’s new premium dining hub, enjoying uninterrupted views of At-Turaif; and the 141-key Samhan Heritage Hotel. Wadi Hanifah, a two square kilometre space accessible from the escarpment walk, will provide passive and active recreational spaces and boutique hospitality venues; places to unwind and spend the afternoon with family and friends in the beautiful wadi surroundings.

Diriyah Gate Development Authority (DGDA) was established in July 2017 to preserve Diriyah’s history, celebrate its community and develop the historic UNESCO World Heritage site of At-Turaif into one of the world’s greatest gathering places at the heart of Saudi Arabian culture and heritage.

DGDA is transforming Diriyah into one of the region’s foremost destinations for cultural knowledge-sharing activities and international events. We aspire to develop Diriyah into a global gathering place by creating rich experiences that narrate the stories of our history, instilling a sense of Saudi Arabian pride and creating globally renowned destinations and landmarks. The Authority is ensuring Diriyah’s cultural landmarks are complemented by leading hospitality brands, fine dining experiences and world-class retail offerings.

We are devoted to enabling the people of Diriyah to achieve their goals. DGDA will celebrate the local community, showing social, cultural and historical achievements, connecting with the roots of the Saudi state and creating solid foundations on which to build the best possible future for the community.

DGDA works alongside Diriyah’s executive bodies, as the primary regulator for the supervisory area (190sqkm) and will exercise best practice in Land Management, and Building Permit and License issuance and oversight.

Diriyah Development Company (DevCo) is a subsidiary entity within DGDA which is responsible for the design, development and delivery aspects of the project. It was set up in 2021 as part of the authority’s growth acceleration plans, with the new structure helping DGDA to prepare for imminent and expedited expansion.

Four Seasons Hotels and Resorts opened its first hotel in 1961, and since that time has been dedicated to perfecting the travel experience through continual innovation and the highest standards of hospitality. Currently operating 123 hotels and resorts, and 50 residential properties in major city centres and resort destinations in 47 countries, and with more than 50 projects under planning or development, Four Seasons consistently ranks among the world’s best hotels and most prestigious brands in reader polls, traveller reviews and industry awards. For more information, visit fourseasons.com. For the latest news, visit http://press.fourseasons.com