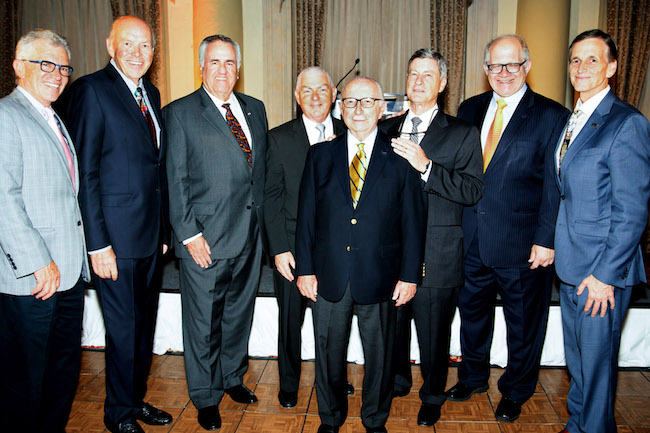 Miami, Florida, September 2016 … Florida International University’s prestigious Chaplin School of Hospitality & Tourism Management is reaching out to its global alumni base to support the Rocco Angelo Legacy in Leadership Campaign. The new fundraising campaign was created to recognize the contributions and ensure the legacy of the university’s beloved and admired teacher, mentor and friend, Rocco Angelo, acting Associate Dean for Alumni Relations at the Chaplin School. Still active after six decades of service to the hospitality industry, Mr. Angelo’s exceptional achievements will be honored through an endowment fund that will make certain his legacy endures, benefiting FIU students of the future. The funds raised will provide scholarships, recruitment initiatives to attract the best and brightest students, alumni engagement efforts, mentoring programs, career services, and student enrichment opportunities.

A visionary leader and a gifted teacher, Rocco Angelo’s achievements span the globe, teaching and consulting in North, Central and South America, the Caribbean, Middle East and Europe. As co-author of Hospitality Today: An Introduction, he saw his textbook, now in its eighth edition, used in colleges and universities across the United States. His efforts were rewarded with numerous accolades, including the prestigious Statler Foundation Professorship in 1993.

But it is his legacy as a teacher and mentor that inspires and informs. FIU recently launched a campaign page online containing video testimonials and numerous quotations from industry leaders who benefited from Rocco Angelo’s knowledge, experience, wisdom and his deep commitment to his students.

To learn more, visit the Chaplin School’s campaign page. To give online, visit the Give Online Now page and select the Rocco Angelo Legacy in Leadership Endowment Campaign as your designation.

About The Chaplin School of Hospitality & Tourism Management:

Florida International University’s Chaplin School of Hospitality & Tourism Management has been distinguished as one of the top hospitality programs in the United States. More than 2,500 undergraduate and graduate students from across the nation and around the world choose FIU for its outstanding reputation, advantageous campus locations, expert faculty, rich curriculum and fast-track career opportunities in the international hotel, foodservice and tourism industries. In August 2006, FIU unveiled the first U.S. school of hospitality and tourism in Tianjin, China. The Marriott Tianjin China Program is FIU’s largest international program, with a capacity for up to 1,000 students. For more information about FIU’s Chaplin School of Hospitality & Tourism Management, visit http://hospitality.fiu.edu/.

Florida International University is recognized as a Carnegie engaged university. It is a public research university with colleges and schools that offers more than 180 bachelor’s, master’s and doctoral programs in fields such as engineering, computer science, international relations, architecture, law and medicine. As one of South Florida’s anchor institutions, FIU contributes $8.9 billion each year to the local economy. FIU is Worlds Ahead in finding solutions to the most challenging problems of our time. FIU emphasizes research as a major component of its mission. FIU has awarded over 200,000 degrees and enrolls more than 54,000 students in two campuses and three centers including FIU Downtown on Brickell, [email protected], and the Miami Beach Urban Studios. FIU’s Medina Aquarius Program houses the Aquarius Reef Base, a unique underwater research facility in the Florida Keys. FIU also supports artistic and cultural engagement through its three museums: Patricia & Phillip Frost Art Museum, the Wolfsonian-FIU, and the Jewish Museum of Florida-FIU. FIU is a member of Conference USA and has over 400 student-athletes participating in 18 sports. For more information about FIU, visit http://www.fiu.edu/.