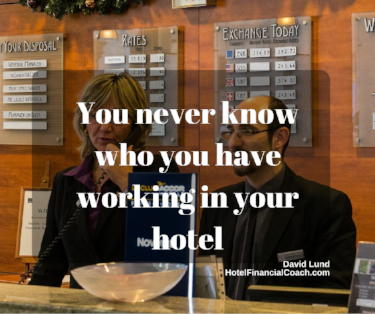 Finding good people in our industry is a tough job, especially in certain economies. It is extra tough when you are looking for a particular skill set. Hospitality does not have the reputation for paying well. We have the reputation for long hours and working on weekends and holidays. Not exactly the millennial’s picture-perfect career profile.

Hospitality is special and either you get it and you drank the Kool-Aid or you don’t. According to salary.com a hospitality degree is number four on the top eight college degrees with the worst return on investment. How is that for a hard pill to swallow. There is hope and there are strategies you can employ that can give you a leg up. I want to tell you a story about finding—by accident—a key employee right under my nose. This might just cause you to have a more serious look around your hotel to see what might be waiting for you.

I was the director of finance in a large hotel back east. Finding service staff was never a problem for this hotel. Waiters, room attendants, bellmen, they were always in good supply. Good paying jobs for hard working people. Finding desk clerks, concierge and the like was the same. But trying to find individuals with special skills like accounting or IT was next to impossible. NO one wanted to work in a hotel if you had a computer science degree. You were in demand elsewhere and why would you go work in a hotel if you are a geek and want a career in systems. The salary we had to offer was not great. On top of this challenge we needed someone who could speak two languages. Not to mention we wanted this individual to look after some 100 personal computers, miles and miles of wiring, a lineup of aging file servers, and be on call 7-24. Oh, and get ready to get your clothes dirty because you are the one who needs to crawl under the desk and in the housekeeping closet to fix whatever needs fixing.

We looked and looked, put ads in the papers—online job postings were just getting started—and nothing. Weeks went by and the mess in our server room was piling up. Service to the networks, applications and PCs was also falling way behind. A certain looming disaster felt closer every day. In the hotel business, losing your systems for even a day can mean disaster and a huge financial hit. I was more than a little worried that this might happen, and under my watch this could mean curtains for me. The regional guy was a big help but he could only come by a day or two at a time and we desperately needed someone full time.

It seemed there was little hope in finding someone until something incredible happened. I was having lunch one day in the employee cafeteria and sitting next to a table of valet parking staff and doormen. They all sit together like the room attendants and, like my table, the office people. I heard something from the table next to us, the door people who were talking in the other language—the language I was not so comfortable with. I heard two words and the name of a local university. I was pretty sure he said computer science. He now had my full attention. The conversation from the other table continued but no more computer talk. I finished my lunch and went back to my office.

I did not think much more about this moment until a couple of days later when I had cause to use the front door of the hotel returning from a Chamber of Commerce luncheon. Who was at the front door? None other than the kid I had heard speaking geek at lunch in the cafeteria. I could not resist. I introduced myself and asked him his name and how long he had been at the hotel. Three weeks, he said in perfect English, and my name is Bernard. I asked him how he found his way to the hotel business and he smiled and said, “I just finished my degree in computer science and I’m not sure what I want to do and there are few jobs to be had right now. I don’t think I want a job in my chosen field. I just didn’t know what to study so I got a degree in systems.” Interesting.

With this information and my introduction to Bernard I immediately asked him if he ever considered a systems career in hotels? He looked at me like I asked him if he had ever been a ballerina. No, he said. I smiled and asked, “What time are you done today?” He said 3:30. I asked him if he would come to my office as there was something I wanted to show him that I thought he might find interesting. He showed up on time and I took him on a tour of our server room and I also gave him a copy of the job description we had for the vacant IT manager position. He was practically speechless. I told him I was interested in him applying and if he was interested the regional manager would be on property the following Monday and I could arrange for him to spend the day with the regional guy to get a feel for the job requirements.

The following day my phone rang early and it was our Human Resources manager. She was just a little excited, agitated is a better word. What was I thinking? This kid just started three weeks ago! We have minimum six months before you can apply for another job policy. He has no experience. He is in the union! You can’t just offer people in other departments jobs! On and on she went and when she was done I said, “I have arranged for Bernard to spend next Monday with Paul. Let’s see what Paul thinks.”

I could feel the steam coming through the phone lines and then she hung up. I was very impressed that Bernard had applied for the job so quickly. Always a good sign.

Monday arrived and I introduced the two geeks and I didn’t see much of either of them for the entire day. At 5 p.m. Paul came to my office and he had a big grin on his face. He said, “Mr. Lund, where did you find him?” I smiled back and said the cafeteria. Paul ran through the day he had spent with Bernard. The kid was a wiz. A real propeller head. He ate, slept and dreamt computers. Networks, software, switches, routers, PCs, printers. You name it and the kid was a natural. Paul concluded by saying he had spoken with HR and he got an earful as well. I thanked him and said we would see what happens.

As they say in the movies, the rest is history. Of course, we hired him. We had no other option. He was a great hire and the kid was amazing. Good with people, good with technology and especially with this new thing he called the Internet and a term I had never heard before, intranet. He was the key to helping our hotel win an innovation award the following year for our little guest service “intranet.” Some 20 years later and the kid, the last time I heard, is running the systems regime for half of the country for the same company.

The moral of this story is this

You never know who you have working in your hotel unless you get lucky like me, or up the chances and do a little looking. Your hotel is full of people that either just landed there or they are trying to support their family with this hotel job until they figure things out with their other career and education. You do not know their skills or their experience. You just might be sitting beside your next star. Take a walk to HR and ask them to run a report from their system and include the fields, prior experience, and education. Bang. Now you have a list that might just help you find your next Bernard. No system like that in HR in your hotel? Go sit in HR. Better still, have someone else go sit in HR and read the resumes of the staff you already have. Make a list of the underutilized talent that already works with you. I guarantee you will be amazed at what you find. I once worked in a hotel where my accounts payable guy had a degree in astrophysics. I am not sure how we could have better utilized this skill but you get my point….

Hotels have long been pipelines into our communities for immigrants and young people that come for a summer and often stay a lifetime. Attracting established skilled and educated people to hospitality for non-service positions is not easy. Use the resources you have that are close to you and discover what hidden talents, experience, and education you might have right under your nose.

Don’t overlook the possibility that the talent you are looking for is already there. I know if I had not heard what I did at lunch that day—and if I didn’t speak with Bernard at the front door—he most probably would not have found his way to the path he did.