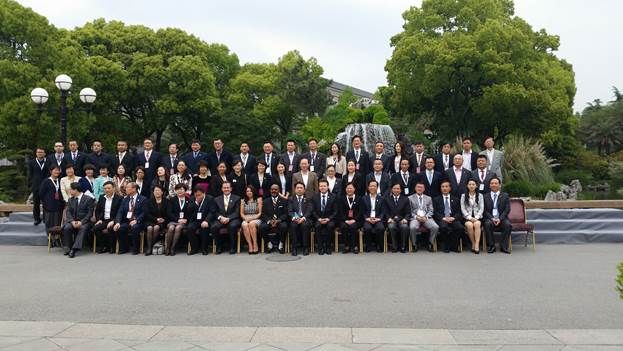 Shanghai, China, April 2014-Members of the American Hotel & Lodging Educational Institute‘s executive staff kicked off their 10-day visit to China with a VIP dinner in Shanghai for hospitality professionals who hold the designation of Certified Hotel Administrator (CHA®), the highest professional certification for hospitality industry executives.

The invitation-only dinner in Shanghai was attended by more than 40 Certified Hotel Administrators and was held at the Andaz Hotel. The hotel’s owner, Mr. William Zhou, CHA, has the distinction of being a member of the first group of hoteliers in China to earn the CHA. The evening’s host was Alex Shi, who represents Yamay Hotel Management Co., Ltd., EI’s partner in Shanghai.

“This tenth anniversary is a milestone and a stepping stone to the continued successful future of EI’s CHA in China,” said Shi. “CHA China has established a large platform for sharing and learning trends and best practices with each other.”

The next day, the EI team participated in a conference hosted by the International CHA Alliance, which brings together leading Chinese and international hotel executives to share experiences and best practices through networking events. Conference attendees were escorted down a red carpet at the Xijioa State Guest Hotel and signed their names on a wall for CHAs. During the conference, Vazquez participated in a panel discussion on online marketing, country manager Leon Shi participated in a panel on training and development, STR’s Steve Hood gave a speech about the new Certification in Hotel Industry Analytics, and Steele presented a speech about professional certification. He also presented five new Certified Hotel Administrators with their CHA pins and plaques.

“Our welcome here in Shanghai has been so warm and gracious,” said Steele. “I am impressed with the commitment to excellence displayed by the hotel executives we have met so far and am proud to number them among the finest CHAs in the world.”

The next leg of the trip takes the EI team to Shenzhen.