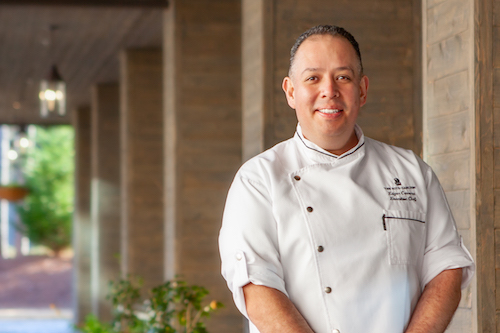 GREENSBORO, GA (February 2019) – Fresh flavors and authentic techniques can be expected at The Ritz-Carlton Reynolds, Lake Oconee with the appointment of Edgar Carrera to Executive Chef, overseeing the entire culinary operation. With Chef Carrera at the helm, the culinary experiences on property will be infused by his heritage, while remaining true to the Southern cuisine that is synonymous with the resort.

Chef Carrera’s foundation is strongly rooted in a culture where the kitchen and cooking is the heart and soul of family life. Hailing from Mexico, the majority of his childhood was spent either at his grandfather’s butcher shop, or in the kitchen with his mother and grandmother preparing traditional Mexican dishes. Heavily influenced by his upbringing, Chef realized his desire to turn this passion of gastronomy into a profession, and explore new cooking styles, flavors, and ingredients.

Having over twenty-five years of culinary experience, Chef Carrera began his career at the Culinary Institute of Mexico, earning a Bachelor of Science degree in Culinary Arts and Management. It was through this training where he honed his skills and diversified his expertise by becoming certified in French and Mediterranean cuisines. Chef Carrera has been a driving culinary force within The Ritz-Carlton since he joined the brand in 2005—having successfully served in roles including Chef de Cuisine at The Ritz-Carlton, Grand Cayman, as well as holding various positions including Banquet Chef and Executive Sous Chef with The Ritz-Carlton Resorts of Naples. It was at The Ritz-Carlton Resorts of Naples where he credits building a solid foundation as a professional Chef. Being with the brand for nearly fifteen years, Chef Carrera has grown through the rankings to his most exciting role yet, leading the culinary team at The Ritz-Carlton Reynolds, Lake Oconee. With his passion for cooking being solidified through family experiences made in the kitchen, Chef is excited to share in the memories and connections that are created over meals and special moments at the resort.

As Executive Chef of the resort, Chef Carrera will bring a fresh perspective to the food and beverage concepts including Barrel Room, Gaby’s by the Lake, Georgia’s and Linger Longer Steakhouse, as well as catering for meetings, weddings and events. Joining the team at an exciting moment where Gaby’s by the Lake and Linger Longer Steakhouse are undergoing design and menu revamps, Chef Carrera will be instrumental in the process in seamlessly weaving in his expertise and heritage – from refined Southern dishes infused with Mexican flavors to his knowledge of prime cuts of meat that was learned during his time at his grandfather’s butcher shop. Additionally, Chef is looking forward to forming relationships with local producers, farmers, and chefs to collaborate in menu creation as well as culinary-focused events at the resort such as the annual Lake Oconee Food & Wine Festival.

For more information about The Ritz-Carlton Reynolds, Lake Oconee and its culinary offerings including Georgia’s, Gaby’s by the Lake, and Linger Longer Steakhouse, please visit ritzcarlton.com/reynolds or call 706.467.0600.