Drinks Trends: 7 Festive Beverages to Discover From Around the World

Home/Drinks Trends: 7 Festive Beverages to Discover From Around the World

Drinks Trends: 7 Festive Beverages to Discover From Around the World 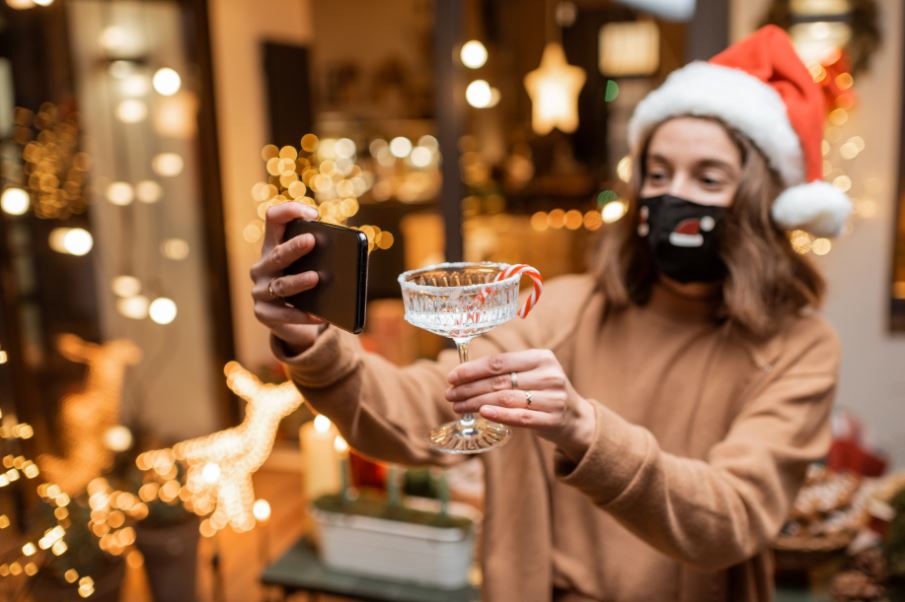 It’s that time of year again, when friends and families come together to celebrate the holidays around a crackling fire, twinkly lights and a scrumptious spread of seasonal delights. And while traditions may reign when it comes to food and beverages, this might just be the year to try something different. After all, 2020 has been one to remember. For those hosting and looking to dazzle their guests with something unique, we’ve pulled together a list of the latest drinks trends – a list of uniquely indulgent holiday drinks from around the world. 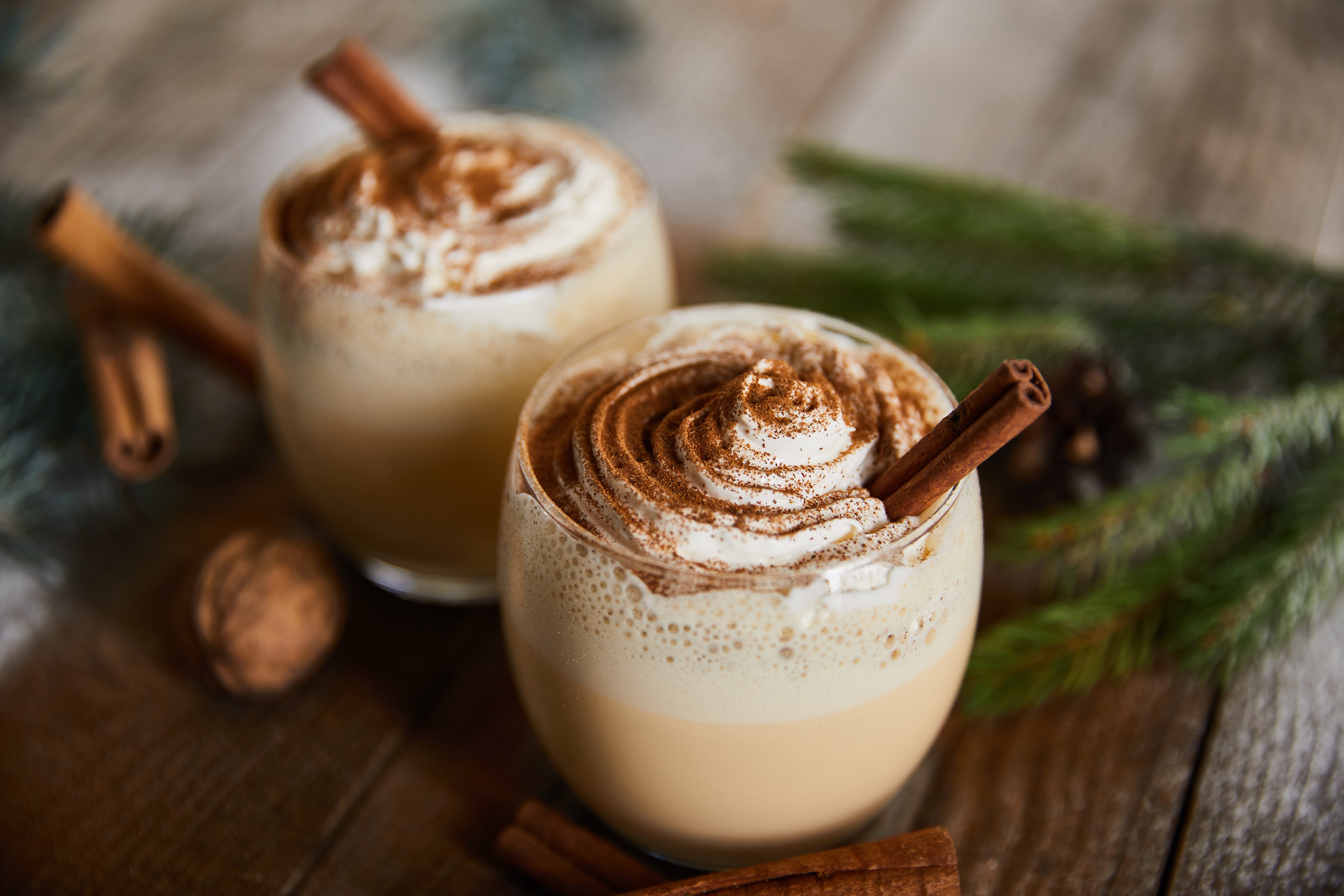 A long-standing favorite in North American households, eggnog is arguably one of the most polarizing beverages out there. Made with raw eggs, milk, cream, sugar, vanilla and brandy (or rum or bourbon), eggnog is deliciously rich and creamy and can be enjoyed both hot and cold. It’s the stateside cousin of the Dutch beverage, Avocaat, except it’s infinitely more indulgent as its recipe also features milk or cream.

While its exact origins are often debated, most historians agree that eggnog was first developed in medieval Europe, from posset – a beverage made from sweetened milk and wine or ale. In the Middle Ages, it was often used as a cold and flu remedy, which is also where the recipe started to include eggs. It was when it made its way to the American colonies that it really started to gain in popularity, as farmers had plenty of dairy products – which made it a cheaper alternative to whiskey or sherry wine. And the rest is history.

In the Caribbean, the sip of the season is a fruity iced punch called Sorrel. The Jamaican word for hibiscus, sorrel (also known as Roselle or Hibiscus sabdariffa) is a seasonal plant that blossoms between the months of November and January and produces a refreshing fruit that ticks all the holiday boxes. Once ripe, the fruit is steeped in hot water, producing a rich, red liquid that’s then brewed with fresh ginger, cinnamon, cloves, bay leaves and a dash of rum – along with copious amounts of sugar. It’s served over ice, making for a refreshing beverage that’s ready to satisfy any sweet tooth. Sorrel fruit is packed with bioflavonoids and vitamin C and offers numerous health benefits – from curing the common cold to lowering LDL cholesterol levels.

Sorrel originated in West Africa and is a close cousin to an African-American favorite called red drink. Roselle hibiscus made its way to the Americas through the Atlantic slave trade and thrived in the Caribbean as its favorable weather conditions are similar to the climate in Africa. Sorrel quickly became a holiday favorite, and not surprisingly so, since it both looks and tastes the part. 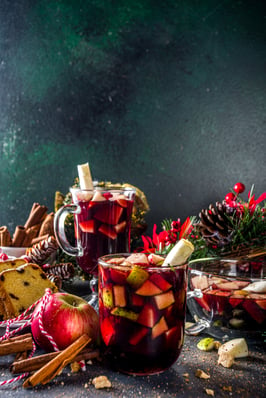 Christmas in Mexico would not be complete without a cup of Ponche Navideño. Literally translated as “Christmas punch”, Ponche Navideño is the Mexican cousin of mulled wine. It’s a spiced punch made with Mexican fruits (from oranges and apples to limes and pineapples), cane sugar and spices, and it’s a classic at large family gatherings over the holidays. It’s typically served on Christmas Eve, where families will have a large pot of the spiced and boozy punch simmering on the stove – filling the house with its delicious, festive aromas!

The origins of ponche are difficult to trace. Some believe that it originated in India, where it was called “pãc,” and others believe that it was first crafted in Persia – with a non-alcoholic version suited to the tastes and restrictions of the Moors. Regardless of how it arrived in Mexico, ponche is now a Mexican staple that comes in endless variants depending on the state you’re enjoying it in.

Try out this quick and easy Ponche Navideño recipe.

Vin chaud – or mulled wine – is a European classic. It’s known across the continent by many different names, including Glögg (in Nordic countries), Gluhwein (in Germany) or Bisschopswijn (in The Netherlands). And while its variations differ in strength and flavor, its key ingredients are typically the same: red wine, a variation of spices (including cinnamon, cloves, cardamom and ginger) and for some, a special twist (bits of orange, lemon, raisins, nuts or even a dash of brandy).

The history of mulled wine dates back to 2nd century Rome. When the Romans traveled across Europe to conquer and trade, they shared their recipe with the people, popularizing the beverage across the continent. That’s why today, whether you’re causally strolling through the brightly lit stalls of quaint little Christmas markets or relaxing on the bustling ski slopes of the Alps, you can be sure to always find a cup of vin chaud within arm’s reach.

Sbiten is a traditional honey and herb-based beverage that dates back to the 12th century. Made with honey, water, spices (including cinnamon, ginger, cardamom and cloves) and oranges, it’s originally non-alcoholic, though it’s often spiked with red wine, vodka or brandy. Sbiten is considered by many to be a home-remedy for a host of ailments, from the common cold to melancholy, making it the perfect antidote for Russia’s long, cold winter days. 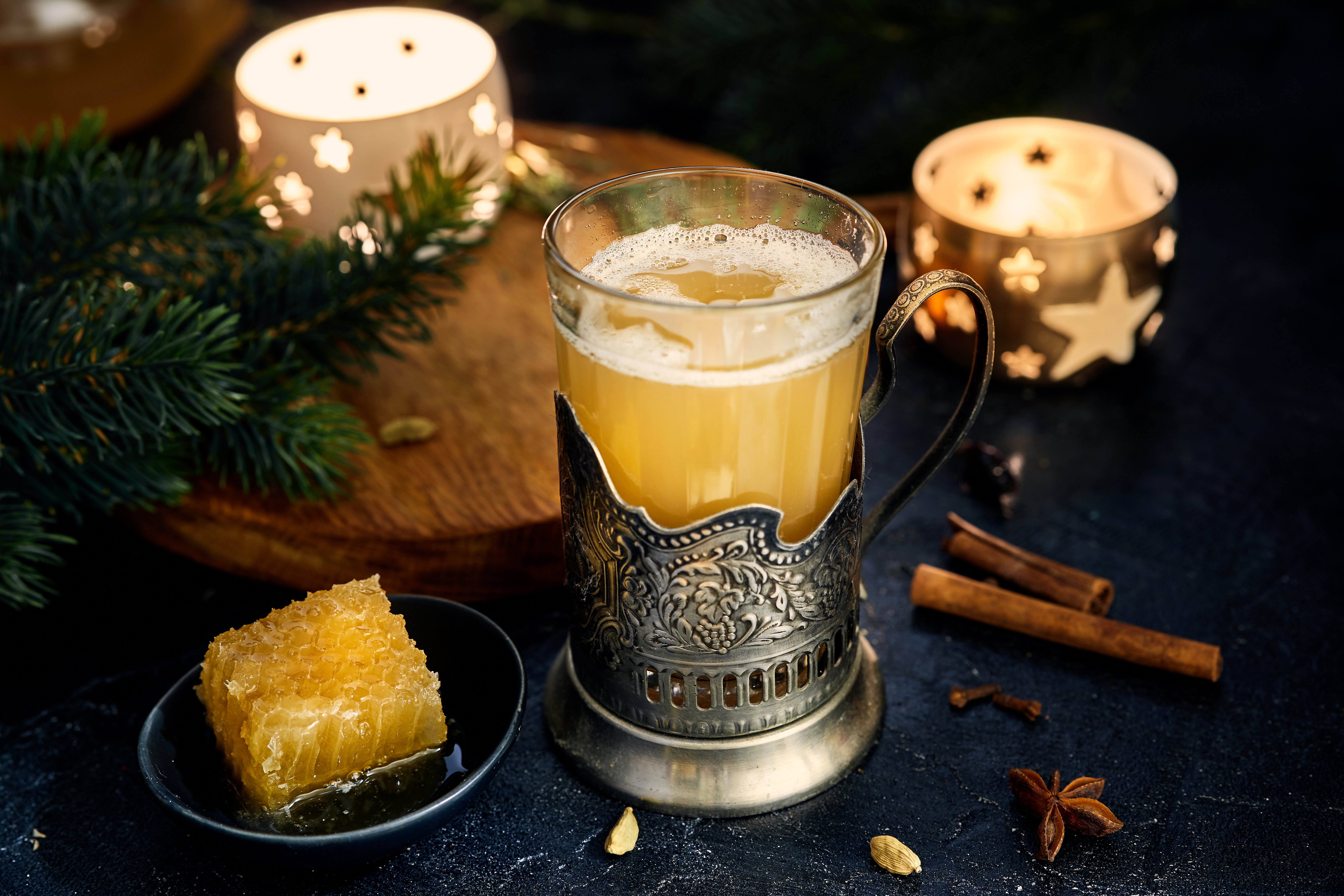 Sbiten has been around since Medieval times – and was first recorded 100 years before the arrival of tea. When it turned cold, Russians would brew it in taverns and even out on the streets. And since its spices were widely available, sbiten was affordable and highly accessible. For centuries, sbiten was the country’s favorite beverage, until the late 19th century when tea and coffee started to gain in popularity. Today, sbiten is making a comeback with many restaurants and street stalls selling the old-time classic ­- with their own unique twist.

Boza is a traditional Turkish malt beverage that’s made from bulgur and yeast. Almost as thick as pudding, and with a similar texture to a smoothie, Boza is sweet, tangy and exceptionally indulgent. Although it’s a cold beverage, Boza is associated with the winter season because of its thick texture and warming effect. But since Boza is a fermented drink (with an alcohol content of about 1%), those who crave it will need to exercise their patience as it can take about 3 days to make a single batch. Made with bulgur, yeast, rice and sugar, Boza has a fermenting time of up to 40 hours. But we hear that it’s worth every bit the wait.

Turkish Boza enjoyed its golden era in the 1600s under the Ottoman Empire, when it was widely consumed by the Ottoman army for its strengthening properties. Today, it’s also popular among new moms as it’s said to stimulate breast milk production.

Sujeonggwa is a non-alcoholic, cinnamon-ginger punch that’s typically enjoyed after a big meal as a dessert beverage or digestif. Literally translated as “cookies in water” Sujeonggwa is made with ginger, cinnamon, brown sugar and water (and is topped with persimmons and pine nuts for an ultimate seasonal effect). Its two main ingredients – cinnamon and ginger – are celebrated for their digestive and anti-microbial properties, making it the perfect beverage for ending a winter meal. Served over ice, Sujeonggwa is packed with all of the flavors and aromas that define the season of giving. 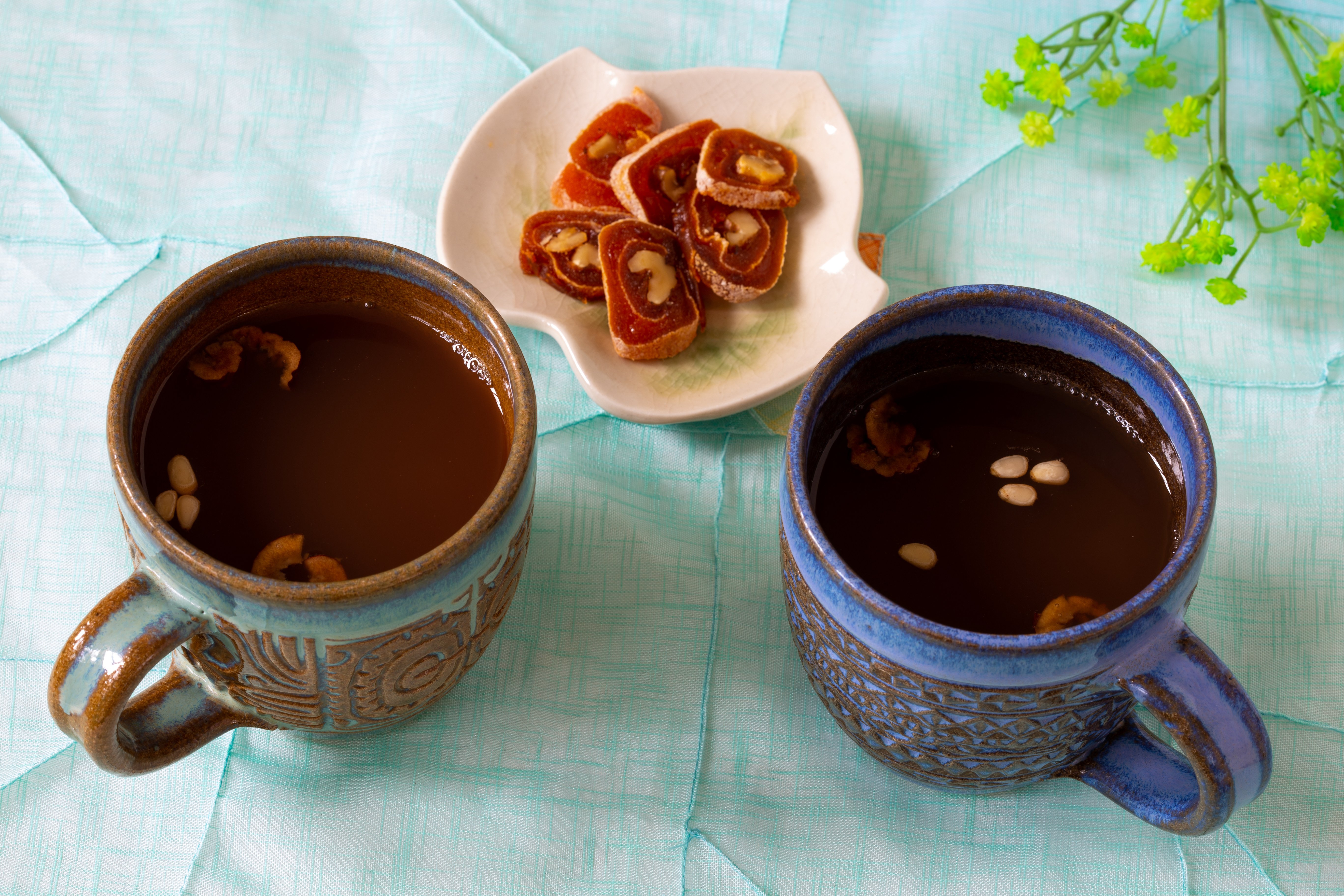 Sujeonggwa is a traditional Korean beverage that dates back to the Joseon Dynasty in the 18th century. However, records suggest that it wasn’t until the late 19th century that its current recipe started to take shape with the inclusion of cinnamon and persimmons.

Try this Sujeonggwa recipe for yourself.

So, there you have it! Now all that’s left to do is kick back, relax and enjoy the celebrations.

Cheers to the holiday season from all us us at EHL!