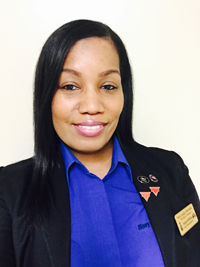 “DiaRaquel always has a smile on her face no matter what is happening in the Navy Lodge or at the front desk,” said Brandon Kala, General Manager, Navy Lodge Yokosuka. “She speaks to and serves all guests with professionalism and dignity and she ensures that all her associates follow her lead in providing outstanding guest service.”

During summer 2015, there was a homeport change between the USS Chancellorsville (CG 62) and USS Benfold (DDG 65), as well as the hull swap of the USS George Washington (CVN 73) and the USS Ronald Reagan (CVN 76). McWilliams became a shoulder to cry on to the many families of the commands and offered words of advice to the new families and spouses coming overseas for the first time. She also became the “unofficial sponsor” of many of the USS Benfold families. She worked closely with the Ombudsman of the command to ensure all arriving families had secured reservations at the Navy Lodge. She and her husband worked diligently with the incoming families of the USS Benfold, going above and beyond her official job duties, by meeting families at the airport and driving them back to Yokosuka, assisting in helping them move out of the Navy Lodge or transporting personal items in their own car to the Ikego housing area. McWilliams’ commitment to the commands, especially the USS Benfold, allowed Navy Lodge Yokosuka to see an increase in occupancy by 5.7 percent during the months it was under renovation.

During December 2014 and January 2015, McWilliams was instrumental in seeing Navy Lodge Yokosuka’s occupancy and revenue increase 17 percent and 10 percent over plan, respectively. She provided one-on-one training for all front desk associates to ensure they were maximizing occupancy and no room was left vacant. She spent countless days and nights working the wait list for extensions ensuring all in-house guests were able to extend their stay, if needed. In addition, she called all the people on the Defense Travel System (DTS) wait list to try and capture possible lost business by inviting them to stay at the Navy Lodge as rooms became available.

McWilliams displays professionalism and poise not only to the Navy Lodge guests, but to her fellow associates as well. From January – May 2015, the front desk department was forced to work off makeshift tables in the lobby due to the renovation of the lobby, front desk and back offices. McWilliams managed to keep the associate morale up during this period by constantly interacting with them.

McWilliams has worked at Navy Lodge Yokosuka since September 2013.