DiamondRock Acquires the Kimpton Hotel Palomar in Phoenix, AZ for $80 Million, or $331,000 Per Key

Home/DiamondRock Acquires the Kimpton Hotel Palomar in Phoenix, AZ for $80 Million, or $331,000 Per Key

DiamondRock Acquires the Kimpton Hotel Palomar in Phoenix, AZ for $80 Million, or $331,000 Per Key 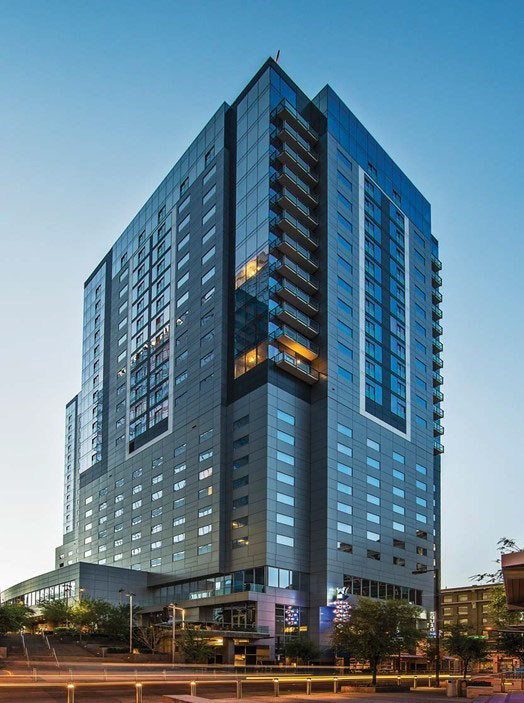 BETHESDA, Md., March 1, 2018 — DiamondRock Hospitality Company (the "Company") (NYSE: DRH) today announced that it has acquired the Kimpton Hotel Palomar ("Hotel Palomar" or the "Hotel"), a lifestyle boutique hotel in the heart of downtown Phoenix, Arizona. The purchase price is $80 million, or $331,000 per key, which represents a 12.6x multiple of the forward 12 months of hotel EBITDA. The Hotel Palomar is ranked #2 of 174 Phoenix hotels on TripAdvisor.

Opened in 2012, the Hotel Palomar is situated in the heart of the CityScape mixed-use project, a 1.2 million square foot urban development that is capitalizing on the resurgence occurring in downtown Phoenix. The Hotel has one of the best locations in downtown; it is located immediately across from the NBA Basketball Arena (Talking Stick Arena), and a few blocks from the MLB baseball park (Chase Field) and the Phoenix Convention Center. The award-winning hotel includes 242 stylish guestrooms averaging a generous 450 square feet, the Blue Hound Kitchen and Cocktails restaurant, a popular rooftop bar and pool, and over 15,000 square feet of flexible indoor and outdoor function space. The Hotel will continue to be managed by Kimpton, who also manages the Company's Shorebreak Hotel. The Hotel becomes unencumbered in two years.

"We are thrilled to announce our acquisition of the Hotel Palomar," said Mark W. Brugger, President and Chief Executive Officer of DiamondRock Hospitality Company. "Located in the heart of one of the largest and fastest growing markets in the country, the Hotel Palomar is one of the highest-rated and best situated hotels in the downtown area. The acquisition aligns well with our strategic goals and increases our exposure to West and West Coast markets and urban lifestyle boutique hotels. Moreover, we have already identified a number of asset management opportunities to enhance the hotel's revenues and cost structure."

Downtown Phoenix continues to evolve as a year-round destination for business and leisure, positioning itself as an ideal 24-hour urban city. With a plethora of amenities, including dining, shopping and entertainment venues, downtown Phoenix serves as a hub for arts and cultural institutions, major league sports activities, live concert events and diverse residential options. Revenue generated in downtown from the retail, hotel and restaurant sectors increased by over 74% from 2008 to 2014.

As the fifth largest city and twelfth largest MSA in the U.S., Phoenix continues to be one of the fastest growing cities in America and has recently undergone an economic revitalization, generating consistently strong hotel demand. Phoenix's warm climate and average of over 300 sunny days a year create a booming tourism industry. Since 2012, the Phoenix market achieved an 8.5% compound annual growth rate of RevPAR, significantly outperforming the U.S. national average. Demand growth of 16.6% since 2012 has strongly outpaced supply growth of 0.4%.

The transaction closed on March 1st, 2018. The Company funded the acquisition with existing corporate cash. The impact to first quarter corporate adjusted EBITDA is approximately $1.0 million.

The Company is updating its guidance for 2018 to reflect the acquisition of the Palomar. There are no other updates to the Company's guidance. Achievement of the anticipated results is subject to the risks disclosed in the Company's filings with the U.S. Securities and Exchange Commission, including its Annual Report on Form 10-K for the year ended December 31, 2017. Refer to pages 4-9 of this press release for a reconciliation of the below non-GAAP financial measures to the most directly comparable GAAP financial measure.

DiamondRock Hospitality Company is a self-advised real estate investment trust (REIT) that is an owner of a leading portfolio of geographically diversified hotels concentrated in top gateway markets and destination resort locations.  The Company, as of the date herein, owns 30 premium quality hotels with over 9,900 rooms. The Company has strategically positioned its hotels to be operated both under leading global brands such as Hilton, Marriott, and Westin and boutique hotels in the lifestyle segment. For further information on the Company and its portfolio, please visit DiamondRock Hospitality Company's website at www.drhc.com.