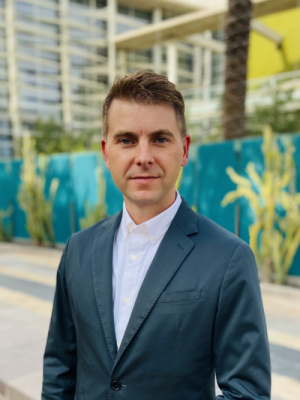 Scottsdale, Ariz. (July 15, 2020) – As general manager and chief enthusiast of the soon-to-open Canopy by Hilton Scottsdale Old Town, Devin Mahoney is a veteran of the hospitality industry with more than 16 years of experience opening and bringing to life new hotels in major markets along the West Coast.

Set to open in September 2020, Canopy Scottsdale is a full-service hotel designed to offer a curated local experience as an extension of the historic arts district in Old Town.

Throughout his career, Mahoney has held a number of general manager and leadership positions within the Kimpton Hotels & Resorts portfolio including Kimpton Hotel Palomar Phoenix, Kimpton Hotel Solamar in San Diego and the former Kimpton Amara Resort and Spa in Sedona, where he was awarded the prestigious “Freshman of the Year” award.

With a passion for creating the best-possible environments for both his guests and team members, Mahoney has also worked within a variety of well-respected Arizona hotels including the former James Hotel in Scottsdale, The Boulders, A Waldorf Astoria Resort in Carefree and the Hilton Garden Inn Phoenix Downtown, where he most recently served as general manager.

An Arizona native and an Arizona State University art graduate, Mahoney enjoys mountain biking, home improvements and spending time with his family when not buzzing around the hotel.

Designed as a natural extension of Scottsdale, Ariz.’s historic arts district, Canopy by Hilton Scottsdale Old Town offers a vibrant Southwest energy infused with Mid-Century Modern sophistication in every aspect of its architecture, aesthetic, service and culture. Taking direction from the curated fine arts and artisan community surrounding it, each of the 177 guestrooms strike a balance between contemporary elegance and impeccable design. Bringing the persona of its neighborhood indoors, the hotel intricately combines dramatic natural elements with curated work by local artists and a rich color palette inspired by Arizona’s sundrenched vistas. The seven-story, full-service hotel offers a variety of locally inspired amenities that create a lively and energetic space to work, rest and play from early morning to late-night, including a state-of-the-art fitness center with Technogym equipment; the ground-floor signature restaurant showcasing a menu of health-focused cuisine with an emphasis on Southwest touches and locally sourced ingredients; and the rooftop pool and bar that elevates the Scottsdale social scene with crafted cocktails, posh bites and unrivaled views of the iconic Camelback Mountain. Staking its claim in what is arguably the best location Scottsdale has to offer, guests will find themselves at the crossroads of the unmistakable energy pulsing through the city and world-class dining, shopping and entertainment just a short walk or bike ride away. For more, visit hilton.com/en/hotels/phxotpy-canopy-scottsdale-old-town/.

About Canopy by Hilton

Hilton’s lifestyle brand, Canopy by Hilton, is a place in the neighborhood to relax and recharge, offering simple guest-directed service, comfortable spaces and thoughtfully local choices. Each hotel is designed as a natural extension of its neighborhood and delivers a fresh approach to hospitality and the guest experience. There are 15 Canopy properties open around the globe and more than 40 under development across 14 countries and territories. Experience a positive stay at Canopy by booking at www.canopybyhilton.com or through the Hilton Honors mobile app. Learn more about the brand at newsroom.hilton.com/canopybyhilton, and connect with us on Facebook, Instagram, Twitter, and Pinterest