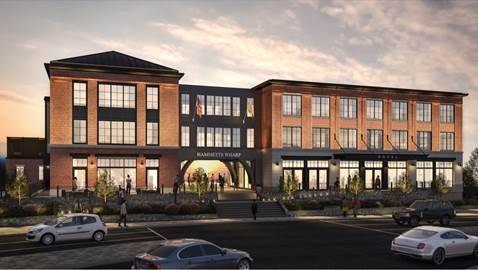 Newport, RI: With a ceremonial firing of a starter cannon, developers, and dignitaries, including Governor Gina M. Raimondo and Newport Mayor Harry Winthrop, marked the construction launch of Hammetts Wharf on Newport’s waterfront.

The $29 million project, supported by a TIF from the Rhode Island Commerce Corporation, will include an upscale 84-room boutique hotel, a 4,000 S.F. waterfront restaurant and 3,000 S.F of retail space fronting America’s Cup Avenue. The project will also create permanent public waterfront access.

“The Hammetts Wharf team is delighted to be starting in Newport this week,” said Colin Kane, Partner, Managing Member, Hammetts Wharf LLC. The project, which provides new public access to the waterfront, over 80 permanent jobs, and significant tax revenue to the City, is made possible by the outstanding support of Governor Raimondo, the CommerceRI professionals and City leadership.”

“This project will be integral to the fabric of Newport—a thriving piece of this city that tourists and locals alike can enjoy year-round,” said Governor Raimondo. “Thanks to our real estate development programs, we’re creating a new hotel, a beautiful waterfront restaurant and prime retail space all at once. I’m already looking forward to coming back for the ribbon cutting!”

Scheduled to open in 2020, Hammetts Wharf will be co-located on Newport’s Waterfront with the Newport Yachting Center, the Mooring restaurant, the Smokehouse restaurant, and the Bohlin event venue. It is designed to complement and enhance the historic Newport Waterfront. With a subtle nod to the city’s turn of the century mercantile wharfs in its design and décor, the hotel conveys quality while being engineered for simplicity.

The arched walkthrough invites pedestrian traffic and provides entry to the waterfront.

Main Street Hospitality will operate the Hammetts Wharf hotel. This is the first entre into Rhode Island for the Massachusetts based company, which operates five properties in the Berkshires.

“We see opportunity in Rhode Island to contribute to the hospitality landscape in Newport and other communities” said Sarah E. Eustis CEO, Main Street Hospitality. “We feel a strong business-friendly culture and very engaged destination marketing teams. This is important for us in exploring new markets and locations. It is our belief that a great hotel can be a force for good in a community, and an important way for people to connect, both to the place and to the experience.”

“The Hammetts Wharf Hotel will be a fabulous addition to the Newport waterfront,” said Newport Mayor Harry Winthrop.

“I'm very happy that Colin Kane and the Hammetts Wharf team had the confidence to invest in the great City of Newport.”

In July, the Board of the Rhode Island Commerce Corporation approved a $3.5 Million TIF for the project which would be paid out over 10 years. According to Appleseed, a third party economic impact analysis firm, this project will create over 80 permanent jobs once the hotel and its associated businesses open.

The project is expected to add $6.7- million annually to Rhode Island’s GDP impact and generate $7.7 million in new hotel and other tax revenue over a 12-year period.

“Hammetts Wharf joins 35 other real estate developments making use of our financing tools. Together these developments will result in more than $2 billion in investment and 5 million square-feet of space across Rhode Island. This Newport project will add hundreds of jobs and millions of dollars in revenue to our state, while improving public access to our waterfront. We congratulate the Hammetts Wharf team on this groundbreaking, and we look forward to the ribbon cutting.”

“We look forward to the project becoming a treasured community asset,” said Kane