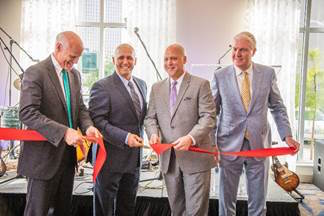 The opening was marked by the attendance of New Orleans Mayor, Mitch Landrieu and Global Head of Homewood Suites and Home2 Suites by Hilton Adrian Kurre, as well as executives of HRI Properties (HRI) and HRI Lodging (HRIL), Hilton Hotels & Resorts, the Industrial Development Board and Wells Fargo Bank. Palmisano Group was the general contractor for the project with HCI Design serving as architect of record.

“We are thrilled to celebrate the grand opening of this hotel in New Orleans. This area has been transformed – and this beautiful hotel now welcomes visitors to our great city in a first class and authentic manner,” said Tom Leonhard, HRI Properties’ President and CEO. “Where else in America can you experience a street car ride, tour a 300-year-old cemetery, step back into history with a stroll through the world class French Quarter, have a fabulous meal, listen to some jazz and then come back to a beautiful and quiet retreat offered here at the Homewood Suites? Only in New Orleans!”

The new Homewood Suites by Hilton New Orleans French Quarter offers a combination of stylish studio and one-bedroom suites, including 12 balcony suites, which feature fully equipped kitchens and separate living and sleeping areas. Guests are provided all of the essentials needed for a comfortable and convenient stay including a complimentary hot breakfast seven days a week, an evening social Monday through Thursday, fast and free Wi-Fi, and a grocery shopping service. The hotel also makes it easy for travelers to unwind with an outdoor space that includes a pool, kitchen and grill area, billiards room, putting green, 24-hour fitness center and concierge services. The hotel includes more than 1,500 square feet of flexible meeting space, with catering options for up to 75 guests.

With its proximity to Bienville Basin mixed-income community, a $30.5 million Choice Neighborhood Grant project also redeveloped by HRI, the company and Urban Strategies partnered to present a pilot Hospitality Career Training Initiative, designed to provide hospitality training for former public housing residents to prepare them for a career in the hospitality industry. Five of the program participants were hired by Homewood Suites by Hilton New Orleans French Quarter.

“Working with our community and neighborhood is extremely important to us whether it’s hiring area residents or supporting nearby charities,” said General Manager Tony Welch. Two not-for-profit organizations were recognized at the opening: New Orleans’ St. Jude Community Center and the Fore!Kids Foundation. Each received a $2,000 donation, plus Fore!Kids received an additional $1,000 as a result of votes by guests participating in a putting contest in the hotel’s unique outdoor space.

After a brief ribbon cutting ceremony, guests of the grand opening were treated to tours of the hotel that included common areas, studio and one-bedroom suites, the hotel’s unique pool deck and putting green and a “Southern comfort food” spread including miniature chicken and waffles, bacon grilled cheeses and barbequed chicken. In addition, guests commemorated the opening by posing for a souvenir photo with Homewood Suites’ mascot, Lewis the Duck. Live music was provided by local band, Motel Radio.

Founded in New Orleans in 1982, with operations nationwide, HRI Properties (HRI) is dedicated to the pursuit of rebuilding neighborhoods and recreating entire communities. HRI has completed over 82 large-scale projects for a total funding value of over $2.5 billion which include over 5,000 apartment units, 4,700 hotel rooms, and more than 1.4 million square feet of office and retail space. HRI’s affiliates, HRI Lodging and HRI Management provide property management service for both HRI owned and third party property owners. HRI Lodging is one of the 50th largest hotel management companies in the U.S. with 26 hotels under management and is an approved operator for all major hotel brands including Marriott, Hilton, Hyatt, IHG and Wyndham select and full service brands.  HRI is a full-service real estate development company, with in-house architectural design and construction/FF&E management capabilities and is a national leader in the adaptive reuse of historic structures. HRI’s mission is Revitalizing Cities by Creating Diverse, Vibrant and Sustainable Communities. For more information, please visit their website at www.hriproperties.com.

About Homewood Suites by Hilton

Homewood Suites by Hilton, Hilton’s upscale, all-suite, extended-stay hotel brand with more than 400 locations in the United States, Mexico and Canada, is an award-winning leader. The first choice for guests seeking comfortable accommodations when traveling for an extended or quick overnight stay, Homewood Suites offers inviting, generous suites featuring separate living and sleeping areas, and fully-equipped kitchens with full-size refrigerators. Additional value-driven essentials include: complimentary Internet, a daily full-hot breakfast and complimentary evening social every Monday-Thursday. Hilton Honors members who book directly through preferred Hilton channels have access to instant benefits, including a flexible payment slider that allows members to choose nearly any combination of Points and money to book a stay, an exclusive member discount that can’t be found anywhere else, free standard Wi-Fi and digital amenities like digital check-in with room selection and Digital Key (select locations) available exclusively through the industry-leading Hilton Honors app. Homewood Suites is focused on guest satisfaction and stands behind each stay with its 100% Suite Assurance® guarantee. For more information on the extended-stay advantage, visit www.homewoodsuites.com or news.homewoodsuites.com.