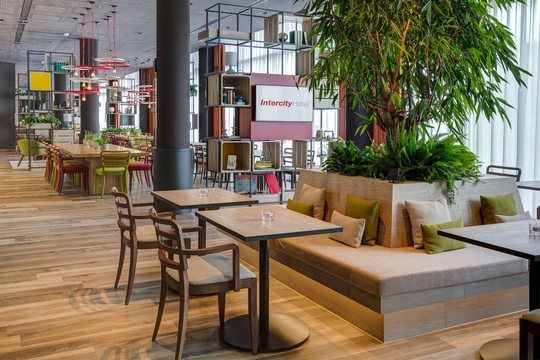 Frankfurt am Main, 15 November 2017 – An IntercityHotel will open at the main railway station in Flensburg in 2020. It will feature the design concept of the Italian architect Matteo Thun, whose work can already be admired at the IntercityHotels in Braunschweig and Duisburg.

The planned hotel, a new build earmarked for development at Bahnhofstraße 40, will offer 152 rooms, a restaurant, a bar, three conference rooms and an underground garage. It will be operated via a lease agreement with IntercityHotel’s partner company JARA Grundstücksentwicklungsgesellschaft mbH.

Located less than ten kilometres from the German-Danish border, Flensburg is a popular destination for tourist and weekend visitors alike. The city is also just under four kilometres from the Baltic Coast. Flensburg also offers good rail links to Kiel, Hamburg and to Fredericia in Denmark as well as boasting a harbour which is mainly used for tourist activities and a fish market. The IntercityHotel Flensburg will enjoy demand from both leisure and business travellers.

IntercityHotel is a Deutsche Hospitality brand which stands for modern upper mid-range urban hotels. IntercityHotels are located within easy walking distance of airports or railway stations. Guests also benefit from a “FreeCityTicket” scheme, which enables them to use local public transport free of charge. The portfolio includes over 40 hotels in Germany, Austria, the Netherlands and China. German Hospitality operates two further brands. Steigenberger Hotels and Resorts has 60 hotels housed in historic traditional buildings and lively city residences and also offers health and beauty oases set at the very heart of nature. Jaz in the City branded hotels reflect metropolitan lifestyle and draw upon the local music and cultural scene. The first Jaz Hotel opened in Amsterdam in 2015.