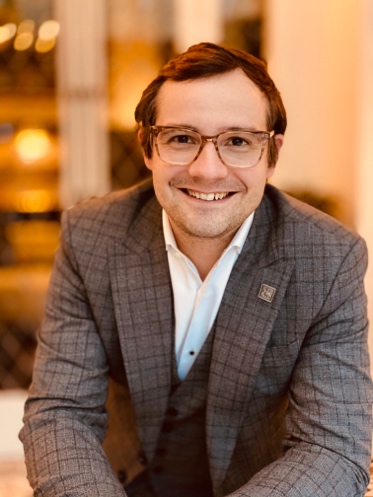 Lacassagne brings more than a decade of hospitality experience to Deer Path Inn from hotels all over the world. He’s held many roles during his career, including hotel manager and director of food and beverage. At Deer Path Inn, Lacassagne will blend his culinary and hotel management background to evolve the hotel’s acclaimed food and beverage program, which includes the distinguished English Room, White Hart Pub, The Bar, Afternoon Tea service and in-room dining. He’ll also take the lead on communicating major news and travel updates with transparency, and a touch of Deer Path Inn’s signature cheek. He will use his platform as innkeeper to build on the inn’s hallmark “home-away-from-home” experience that has resulted in the hotel’s unmatched guest satisfaction ratings.

“Deer Path Inn has made a name for itself as a small-town hotel with the programming, amenities, and culinary offerings that compare to much larger luxury properties,” says Matt Barba, vice president of operations for Charlestowne Hotels and former Deer Path Inn innkeeper. “Patrick’s dynamic mix of luxury hotel management expertise and food and beverage experience made passing the baton to him a no-brainer. Under Patrick’s leadership, we have no doubt Deer Path Inn will continue to shine as a local institution within the Lake Forest community and a serve as a comforting space to escape the hardships endured in 2020.”

No stranger to historic properties, Lacassagne managed the century-old Knickerbocker Hotel in Times Square, which was awarded the Forbes 4-Star rating in 2020 in large part for its commitment to excellence and service standards – a touchstone of the Deer Path Inn guest experience. Prior to joining The Knickerbocker, Lacassagne was instrumental in the renovation of the Sofitel Legend Old Cataract in Egypt, where he introduced elevated French cuisine to the Middle Eastern-inspired menus and established the hotel as a destination recognized for its innovative gastronomic experiences.

“The very first time I visited Deer Path Inn, I felt an instant connection to the property,” says Patrick Lacassagne. “I learned very quickly how much this property means to the local community and the significant role it plays in the history of Lake Forest. I’m honored to be a part of Deer Path Inn’s story and add some chapters of my own reflecting my love of international food and drinks. I’m looking forward to creating more memorable experiences for our guests for years to come.”

Established in 1929, the 57-room Deer Path Inn is a respite for Chicago city dwellers, out of towners, and Anglophiles alike. The inn is known for its traditional Afternoon Tea service (developed in partnership with a Master of Tea from England), its exceptional dining and cocktail offerings across three restaurants (from elevated European cuisine + white glove service in The English Room to traditional bangers and mash in The White Hart Pub and creative cocktails and Chicago’s best sushi in The Bar), and spacious accommodations.