Dealing With Angry Customers: Be Sincere When You Apologize

Home/Dealing With Angry Customers: Be Sincere When You Apologize

Dealing With Angry Customers: Be Sincere When You Apologize 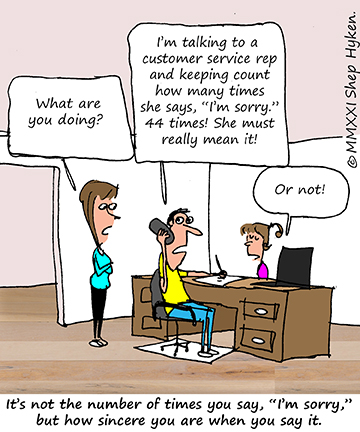 “I’m sorry.” Customers love to hear those important words, especially when they are calling about a problem or have a complaint. I briefly covered this in a recent article (The Five Best Things to Say to an Angry or Upset Customer), but I want to dive into the “I’m sorry” comment a little deeper.

Not long ago I called a customer support center and early in the conversation the agent said, “I’m sorry you are experiencing this problem.” I appreciated those words. I felt that I was being heard and even understood. That was until a minute later when the agent once again said, “I’m sorry.”

That second apology almost went unnoticed. That was until she said it for the third time. And then there were the fourth, fifth, sixth, and seventh times. In four short minutes, she apologized seven times. I admit that I may have made statements to see how many times she would apologize. I realized after the third one that she was trained to say, “I’m sorry,” but she wasn’t trained on when or how often to say it.

There will be times that you feel you have to repeat yourself throughout the conversation. I’m not saying you have to only say, “I’m sorry,” one time. It’s okay, as long as you are aware and using that important phrase at the right times. Using it because you have nothing else to say can come off as insincere. It can seem as if you’re working off of a script, which is okay as long as the customer doesn’t get the sense that you’re working off of a script.

Obviously, you want to apologize for any problems toward the beginning of the conversation. You could make a statement such as, “I’m sorry for the problem you’re having. I can understand why you are frustrated. I would be too if that happened to me.” In just three short sentences, just 23 words, you have apologized for the problem, you’ve acknowledged your genuine concern and you have even shown empathy with the last statement about how you would be frustrated if it happened to you. Not a bad way to start a conversation with an angry customer.

And as a final gesture of proving you care, you may want to end the conversation with something like, “Once again, I’m sorry for the problem. I’m glad we were able to resolve it. Let me know if I can be of further assistance. Thank you for the call and thank you for your business.”

The Three N’s of Employee Fulfillment
Feedback Bribery
“New-Style” Digital Versus “Old-Fashioned” Human Interactions
A Fast Answer or the Right Answer
When Your Customer Experience Hits a “Bump in the Road”
Old School Ideas Can Have Big Impact
How Digital Transformation Is Facilitating Servitization in the Hospitality Industry
The Secret To Customer Loyalty
Lately, Hotels Seem to Be Falling Short on the People Parts
The Five Best Things to Say to an Angry or Upset Customer
Best in Class Versus Best in Industry
Best in Class Versus Best in Industry
The Culture Challenge
Would Customers Pay to Do Business with You?
You’re Terminated: Three Reasons Customers Will Stop Doing Business With You
Amazon Sets the Standard for Every Business
Want Your Employees to Voice Suggestions When Customers Treat Them Poorly? The Double-Edged Effects of Felt Trust
Don’t Make Me Repeat My Story!
Personalizing the Customer Experience Is a Competitive Differentiator
What Is Service Culture?