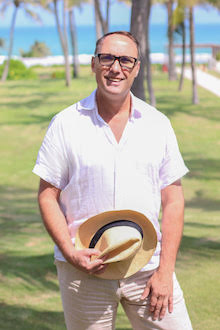 The South African brings with him close to a decade of experience in hotel management in Asia, and close to the same number of years in restaurant management and wine education in the UK.

Dawid’s most recent role was at Paresa Resort & Spa in Phuket where he was general manager for five years. He has also held management positions at two other iconic Thailand properties: Six Senses Koh Samui and Sarojin Resort in Khao Lak.

Prior to moving to Asia, the 45-year-old managed popular London restaurants including the Michelin-starred London institution that was Lindsay House, to be followed soon after by the award-winning Corrigan's of Mayfair. Dawid was involved with both iconic establishments. He also lectured at the London Wine Academy for six years and is a qualified sommelier with a diploma in Viticulture from Brighton University. Dawid also graduated from Cape Town Hotel School with a diploma in Hotel Management.

When Dawid decided to join the Fusion team, it was the company’s vitality and vast abilities that stood out to him.

“There are not that many, if any, fully integrated resort companies out there,” he said. “Fusion really has it all covered under one roof. It's certainly very impressive. I also love the vibrant energy and almost kindred connection that’s palpable at the corporate office.”

His wealth of experience in both boutique luxury and the wellness sector made him the perfect fit for the company.

“Dawid’s proven passion for creating unique tailor-made guest experiences, his ability to think outside of the box, and his strong ‘can do’ approach to management make him the right person to bring Fusion Resort Cam Ranh to the next level,” said Atilla Erda, the group’s chief operating officer.

Dawid joins the team as the oceanfront property cuts the ribbon on The Hideaway, a resort within a resort. The secluded hillside retreat (an extension of the existing lineup of ocean-facing suites and pool villas) features 50 all-new private pool garden villas plus an extra-large swimming pool, a poolside restaurant and fitness centre, an outdoor tennis court and a tranquil yoga pavilion.

Fusion will continue to expand this year with the opening of two more hotels: ‘Darwin – a Fusion Original’ in downtown Saigon, and Fusion Suites Vung Tau on the southern coast.

Since its launch in 2008, Fusion has become a leading innovator of wellness-inspired hotels and resorts and is now the only fully vertically integrated hospitality company in Southeast Asia. Under one roof, Fusion conceptualizes, designs, builds and manages beachside resorts and city hotels through its uniquely branded hospitality concepts. Fusion has opened six resorts and hotels in Vietnam so far, with a team now boasting more than 1,800 employees, including 300 spa specialists. At present, guests can experience Fusion’s original “all-spa inclusive” concept, and “breakfast anytime, anywhere” service, along with their inventive approach to the hospitality sector, in Da Nang, Cam Ranh, Ho Chi Minh City, Hue, and Phu Quoc. The Fusion catalog of brands currently includes:

Fusion Originals: The individually branded Originals do not share a consistent style. Instead, Fusion tailors each hotel to evoke the life and times of a pioneering artist, inventor, scientist, or social leader. Originals aim to provide fun, fresh, and 100% unique hotel concept each and every time.

Alba Wellness Valley by Fusion: Located 30km from the city of Hue, this expansive project is located at the source of the Thanh Tan geothermal spring and comprises two accommodation options: the five-star Alba Wellness Resort by Fusion and the three-star Thanh Tan Hot Springs by Fusion. With a series of thermal baths at its heart, the valley also offers various outdoor facilities including a water park, a family-friendly craft village and organic farm, and a thrilling highwire course and zip line.