Customer Service May Not Be Your First Priority, and That’s Okay

Home/Customer Service May Not Be Your First Priority, and That’s Okay

Customer Service May Not Be Your First Priority, and That’s Okay 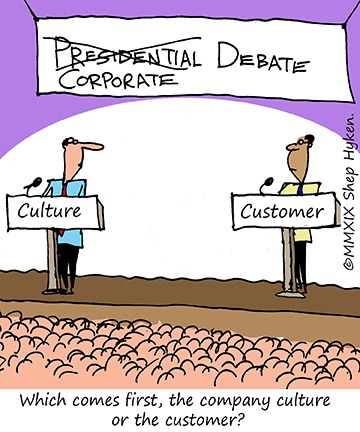 Tony Hsieh is the CEO of the online shoe and clothing company, Zappos. The company’s reputation for amazing customer service is almost a cliché in the customer service world. Zappos stories have become customer service legends. The Zappos phone call that lasted 10 hours and 43 minutes is one such legend. There are many others, and this is just one of the reasons Zappos is recognized as one of the top customer service companies on the planet. Their secret to success? Contrary to what you might think…

Customer service is not the first priority.

WHAT?! How can that be? This is what Zappos is known for. Well, hold on! We’ll get to the reason in a moment.

Recently I was in Las Vegas for another CCW (Customer Contact Week) convention, and Tony Hsieh was one of the general session speakers. I’d seen Tony speak before, and he holds nothing back. He briefly told the Zappos story about why it has been so successful. That’s when he dropped the “bomb” on the audience—several thousand customer care professionals, all anxiously awaiting Tony’s comments. He informed them that the customer was no longer the first priority. Culture had replaced the customer as the top priority. Hsieh said, “Get the culture right, and we’ll deliver the customer experience we want our customers to have.”

Sounds simple enough, but that doesn’t mean it’s easy. Creating a culture that sticks—where everyone buys in—is a tough battle, but one worth fighting. The focus on culture is really a focus on people. Get the right people on the metaphorical bus, all happy to be going in the same direction, and you’re on the way to creating the culture you want.

Entire books have been written about how to create a culture. For this lesson, let’s keep it simple. (Remember, simple doesn’t mean easy.) Leadership must decide what they want the company to be. That’s where the culture begins. It needs to be clearly articulated. If your culture is focused on service, create a defining statement about that service culture. Keep it short—one sentence or less. For Zappos, that defining statement is the first of their core values, and it is to “Deliver WOW Through Service.” Once you define it, you must live it, hire for it, train to it, and constantly remind people about it.

By the way, Tony shared his goals and priorities over time. When the company first started out, he wanted the company to be the Internet’s largest footwear/clothing company. Then they shifted the focus to being number one in customer service. Eventually, the top priority at Zappos became all about the culture. Culture drives everything!