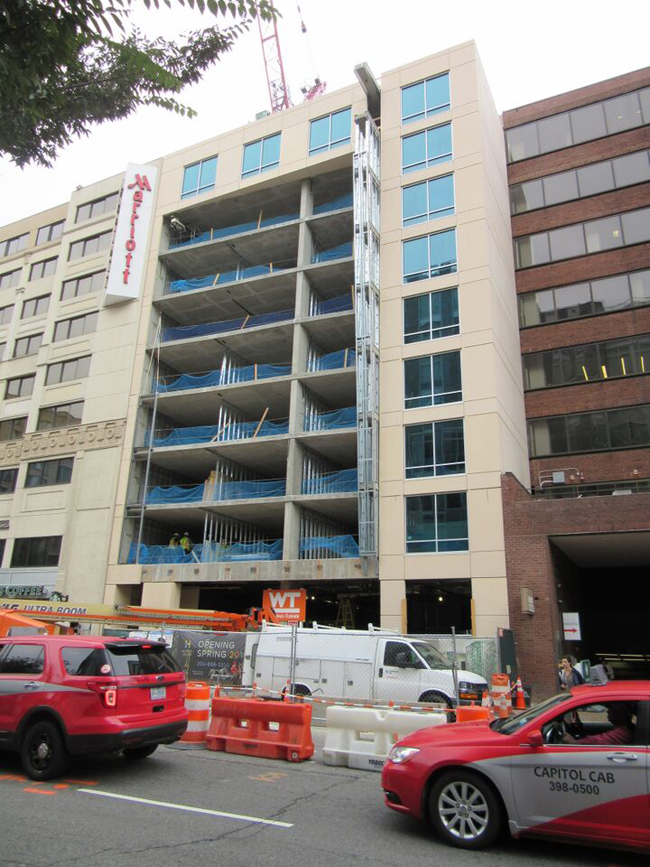 FAIRFAX, VA – October 9, 2015 Crestline Hotels & Resorts, LLC (Crestline) announced that the Hyatt Place Washington DC /Georgetown/West End has reached an important milestone in its construction—the ‘topping out’ of the nine-story building. The hotel is scheduled to open in the spring of 2016 at 2121 M Street NW and will offer 168 guestrooms. It is being developed by Washington DC-based Renaissance Centro, which enjoys a 30-year legacy of nationally recognized projects throughout the DC metro area.

At the topping out celebration, developer Albert H. Small, Jr. said, “The topping out marks the construction progress achieved since first reaching grade on the property this summer. We are on track for our intended opening in the spring of 2016 and want to thank the entire team helping to bring this hotel to fruition. This includes: General Contractor Whiting-Turner, concrete subcontractor Miller & Long, architect JN+A, lender United Bank, Hyatt Hotels & Resorts, and of course our management company, Crestline Hotels & Resorts, as well as many others.”

Located in Washington’s beautiful West End neighborhood, and adjacent to historic Georgetown, Hyatt Place Washington DC/Georgetown/West End will offer visitors 168 spacious guest rooms in a striking nine story building with a rooftop terrace.  Perfect for business and leisure travelers, and convenient to Embassy Row, this hotel is steps from Georgetown’s shopping, dining and nightlife, while easily accessible to the heart of the nation’s capital via the Washington DC Metro subway system.
The hotel will bring the Hyatt Place brand’s intuitive design, casual atmosphere, and practical amenities, such as free Wi-Fi and 24-hour food offerings to Washington DC’s West End area.  Each of the oversized guest rooms will feature the perfect blend of home and office, so that you can relax while staying productive during your visit. Connect all your electronic devices to the Hyatt Plug Panel™, rejuvenate with KenetMD™ bath essentials and sleep soundly on your Hyatt Grand Bed®.  Free hotel-wide Wi-Fi, free a.m. Kitchen Skillet™ hot breakfast, 24-hour StayFit Gym and an indoor pool will make guests’ stays as seamless as possible while on the road.  Gallery Hosts will be available 24-hours a day to take care of guests, fulfill a 24/7 Gallery Menu order, help plan a meeting, make coffee or do anything else guests may need.  In addition, Hyatt Place Washington DC/Georgetown/West End will feature two board rooms and three meeting rooms, offering 2,200 square feet of event space—perfect for small meetings and gatherings.  Onsite parking will be available.
Guests of Hyatt Place Washington DC/Georgetown/West End will be a short walk from two Metro stations with easy access to the downtown Business District, the National Mall, Capitol Hill as well as the City’s renowned monuments and museums.  The hotel is only five miles—a 20-minute ride—from Ronald Reagan Washington National Airport.  For more information visit www.hyattplacewashingtondcgeorgetown.com or call our pre-opening sales office at 202-838-2222.

Renaissance Centro is a dynamic real estate development firm specializing in creating projects that are relevant for today and tomorrow.  The company focuses on urban centers as well as suburban locales close to transit and other lifestyle amenities so that people can live, work and play with ease and convenience.  For more information visit:  www.RenCentro.com.

Crestline Hotels & Resorts, LLC is one of the nation’s largest independent hospitality management companies.  Founded in 2000, the company presently manages 87 hotels, resorts and conference and convention centers with nearly 14,000 rooms in 25 states and the District of Columbia.  Crestline manages properties under such well-regarded brands as Marriott, Hilton, InterContinental, Hyatt and Starwood, as well as independent, private label hotels and conference centers throughout the United States.  For more information visit:  www.crestlinehotels.com.