COVID-19 Recovery in the UK – The Importance of Domestic Demand

COVID-19 Recovery in the UK – The Importance of Domestic Demand

Like much of the world, the UK has been hit hard by the coronavirus, with more than 37,000 deaths and 265,000 confirmed cases as of 27 May and the highest number of attributed deaths in Europe (although fewer deaths per capita than Spain, Italy and Belgium). The pandemic has hit all areas of the economy, but the hospitality industry has undoubtedly been and will continue to be one of the worst affected. Fortunately, there is light at the end of the tunnel for the lockdown phase, and the focus of hoteliers is shifting from how to manage the closure to developing a sound reopening strategy.

On Sunday, 10 May, Prime Minister Boris Johnson indicated that some parts of the hospitality industry may begin to reopen from July, conditional on the state of the pandemic at that time. While a positive sign for hoteliers itching to get back to business, it is important to make a distinction between when hotels will be allowed to reopen and when they should reopen. As with the rest of Europe, we expect hotels to reopen gradually in the UK and that they will likely need to continue making use of the government’s job retention scheme (which was fortunately just recently extended through to October) until demand returns in sufficient quantities to justify a more profitable operation than the cost of remaining closed.

As we have previously stated and in line with what seems to be the consensus amongst most in the European hotel industry, countries and markets with less reliance on international demand and air travel are likely to see a faster recovery than others. The below map provides an overview of the proportion of room nights arising from domestic guests in each country.

Domestic Demand as a Percentage of Total Room Nights Across Europe 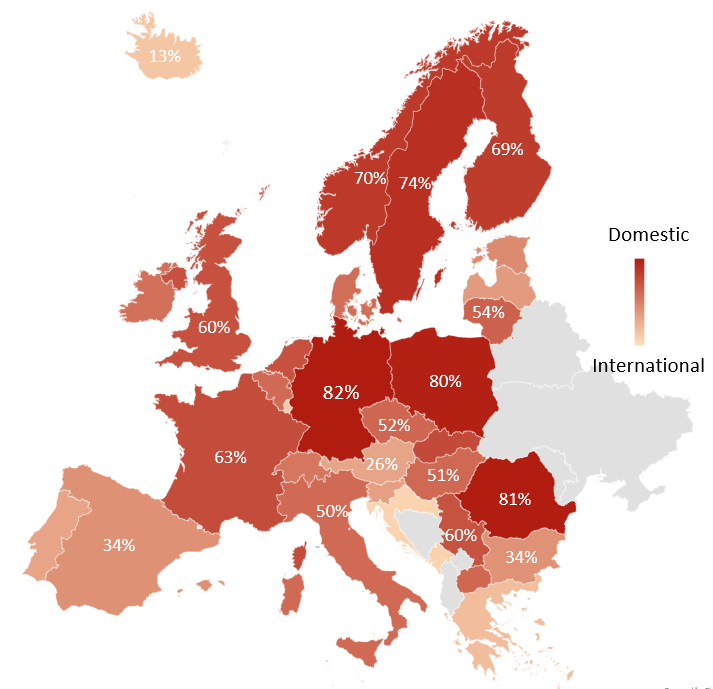 As can be seen above, more than half of the UK’s demand is domestic. All else being equal, this bodes reasonably well for the country’s recovery. While it is not as well placed as the Nordics, parts of Eastern Europe or Germany (although it should be noted that much of the latter’s domestic demand is driven by trade fairs, which will likely take longer to return to normal), it is in a similar position as France and significantly better off than much of Southern Europe.

It is also important to look at this from the other side of the equation and consider what happens when holidaymakers that typically travel overseas for their holidays elect to instead stay within the country. The UK is an extremely important source market for much of Europe, generating hundreds of millions of tourist room nights on the continent. The following map illustrates the relative importance of British tourists as a proportion of international demand.

British Tourists as a Percentage of Foreign Demand 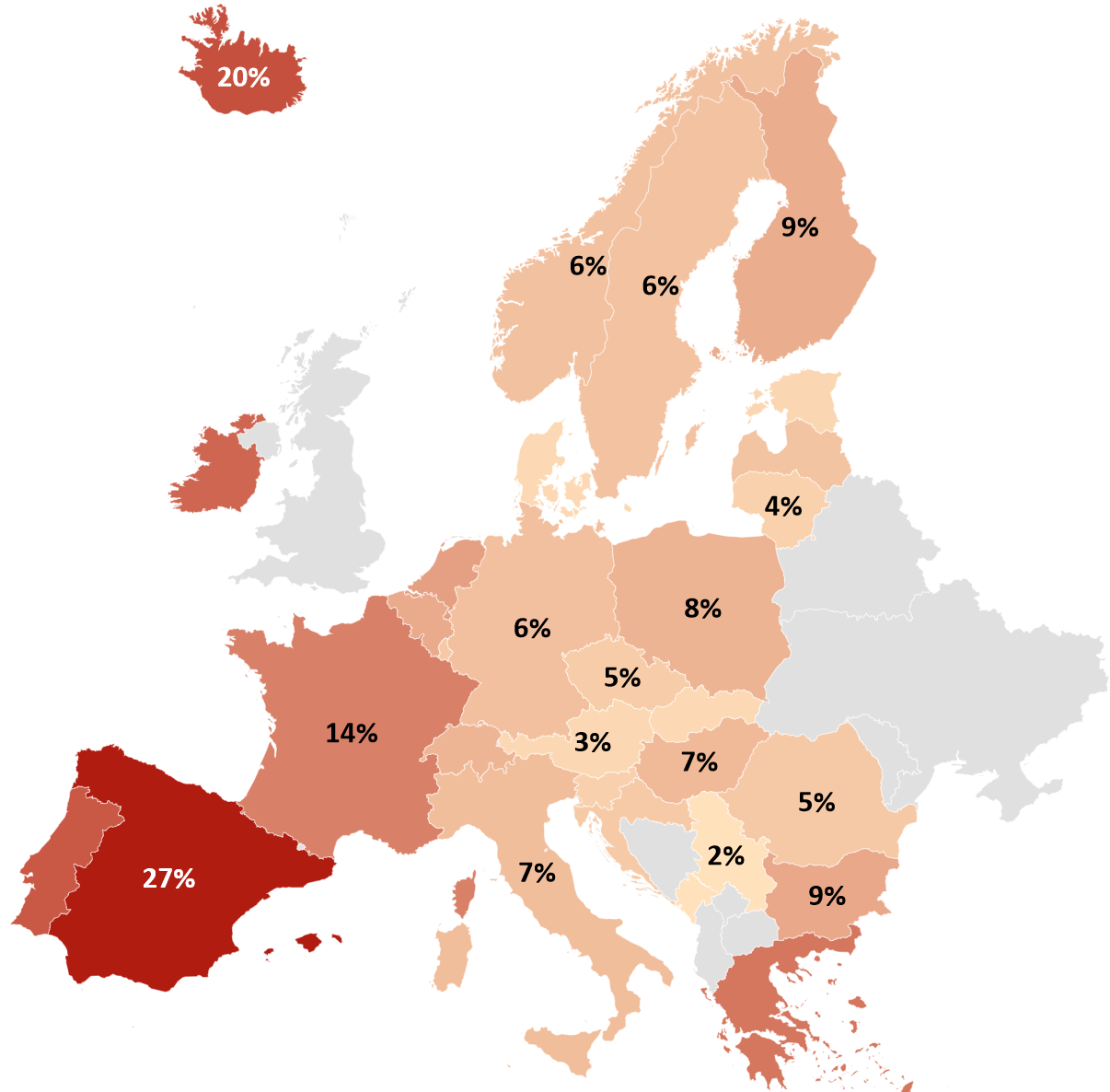 Despite the easing of lockdown in the UK starting to get under way and airlines such as Ryanair announcing that they are aiming to resume up to 90% of their scheduled flights by July (albeit possibly with a reduced seating capacity), the British government has stated that social distancing, 14-day quarantine and other protective measures will likely result in summer foreign holidays being off-limits for British people. This will undoubtedly have a massive impact on Spain, Portugal, France, Iceland and other countries heavily reliant on UK tourists. Even those countries in the above map where British travellers account for less than 10% of foreign demand, the absolute number of tourists can still number in the millions in absolute terms. For example, although British tourists account for only 7% of foreign demand in Italy, this amounts to more than 14 million room nights annually.

The question then becomes, what will these travellers that would traditionally be going overseas do instead? While some might be comfortable enough to still travel overseas and determined enough to find a way of doing so, the decision for most will be whether to postpone all holidays until next year (or beyond) or to plan a domestic holiday. Assuming government policy allows for doing so, people will need to weigh their confidence in the health and safety measures of hotels, restaurants, transport and so forth against their desire and need to get out of their homes and local area. As anyone who has been for a walk in a London park only to find it crowded with fellow ‘exercisers’ despite lockdown measures during this unusually sunny spring can attest to, there is clearly a strong desire to be outdoors and away from home. The psychological impact of this lockdown will pit the prolonged cabin fever against the fear of being infected, and if the former wins out we are cautiously optimistic that British tourists will be eager to book some sort of holiday once it is deemed safe enough to do so. This could be a silver lining for British hoteliers and operators of self-catering and camping operations, and help support domestic demand in the short to medium terms, smooth the recovery curve and allow hotels to stay in business until the pandemic is brought under control and international demand begins to return.

Having considered the macro implications of domestic versus international demand on the UK as a country, hoteliers must also drill down into the detail of their region’s, town’s and micro location’s demographics and segmentation to guide their strategy for reopening. The following chart provides an overview of the importance of the domestic market across the UK’s countries and regions. 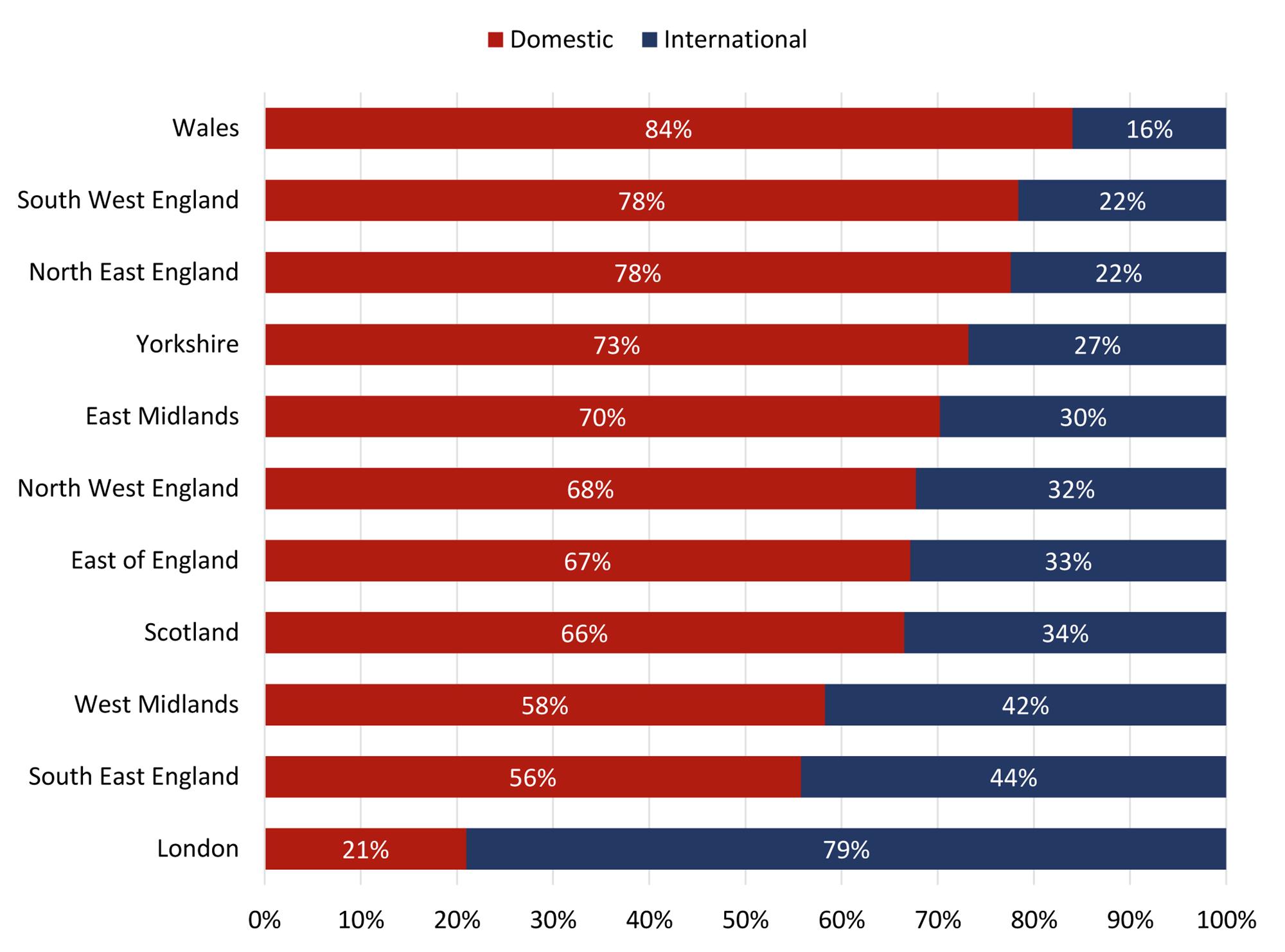 As is clearly evident from the above chart, the UK regions are significantly less reliant on international demand than London and, as such, may see a faster recovery to pre-crisis levels or at the least a less pronounced drop in performance in the short to medium terms. This will naturally depend on the specific market – other gateway cities with heavy reliance on international demand like Edinburgh are also likely to find themselves in a similar situation to London. Those hotels which are more heavily reliant on conferences, meetings and banqueting events may find that recovery will also take longer.

Of course, the share of domestic demand is not the only variable in determining how quickly a market will recover. Segmentation will also be a major factor, with leisure business expected to return faster than corporate. The following chart breaks down the domestic demand in each region by purpose of travel.

Domestic Demand by Purpose of Travel (% of Room Nights) 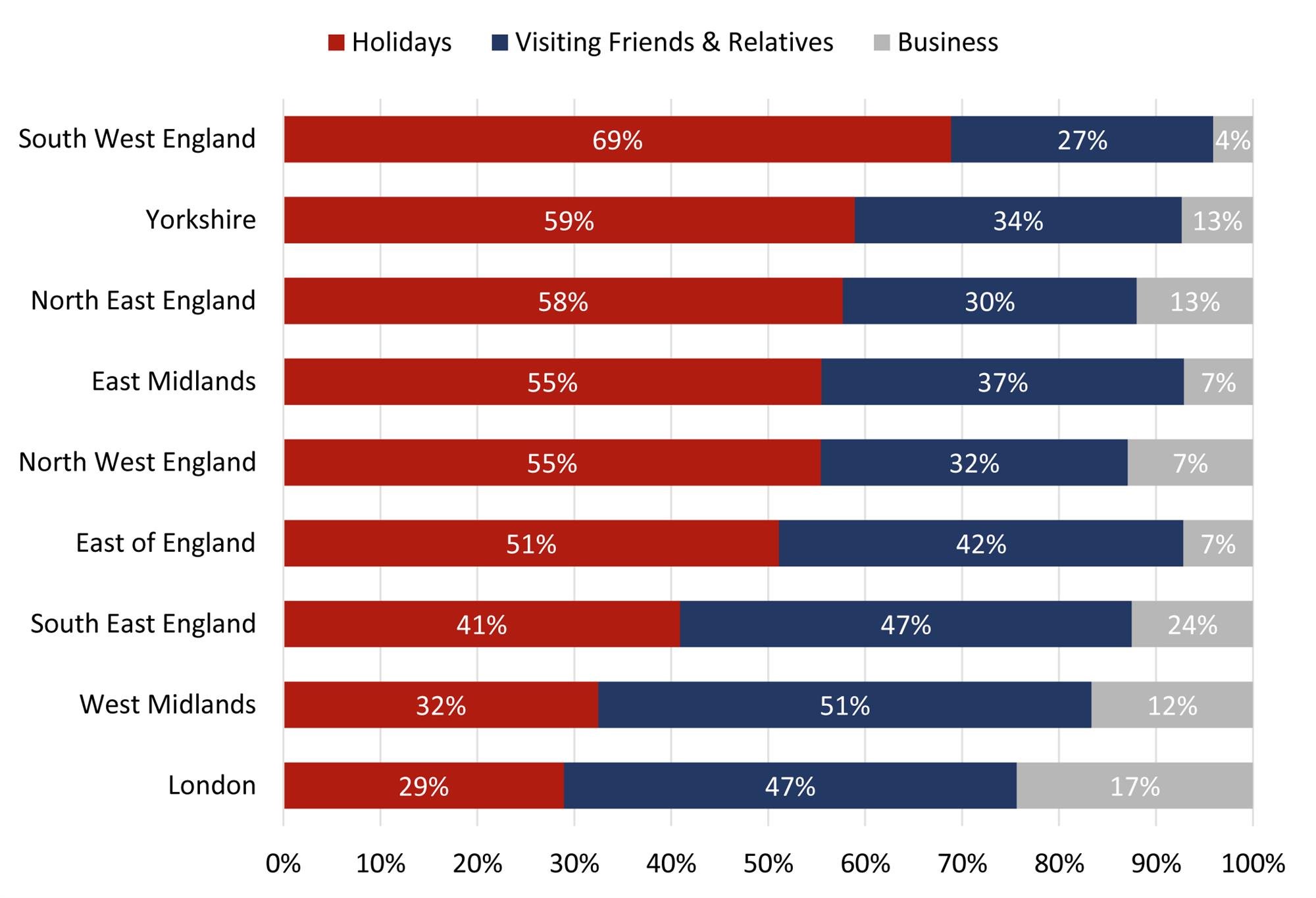 Source: VisitBritain GBTS 2019. Data outside of England not available.

To conclude, we are cautiously optimistic when considering the UK hotel industry’s ability to recover at a reasonable pace compared to the rest of Europe and to focus on domestic tourism until international demand returns. This is not to say that it will be smooth sailing for anyone or that there will not be casualties – there certainly will be, particularly in markets reliant on international and/or corporate and MICE demand. But given the psychological toll that the length of this lockdown is having and the likely extended limitations on going overseas, British hotels should also be able to capture a portion of traditionally outbound tourists. Even a small fraction could tip the scales just enough to help many properties remain solvent throughout this crisis.

Stephen Collins is an Associate Director with HVS’s London office. He joined the company in 2014 after graduating with an MSc in International Hotel Management from the University of Surrey and spending a year working in operations in one of London’s luxury hotels. He also holds a bachelor’s degree in Management and Organizational Studies specialising in Finance from the University of Western Ontario and has undertaken a large variety of feasibility studies and valuations across Europe.

The Magic Returns to the “Happiest Place on Earth”
ALIS Kicks Off 2023, With Most Expecting the Year’s Best Days to Come in the Second Half of the Year
What to Expect in the Hospitality Industry in 2023
REPORT: Hotels Continue to Recover in 2023 as Industry Begins New Era of Operations
Almost Half of Global Hotel Markets Recovered RevPAR With Challenging 2023 Ahead
Do Sports Entertainment Districts Make a Difference?
New York City’s Comeback and Luxury Destinations Highlighted U.S. Hotel Performance Recovery in 2022
HVS Outlook 2023: Beyond the Recovery
Southwestern Utah is Booming, Attracting National Investor Interest
Third-Party Hotel Operators Set to Grow Across Europe, Says HVS
Tourism Set to Return to Pre-Pandemic Levels in Some Regions in 2023
HVS Monday Musings: Understanding Hospitality REIT
Indian Hospitality Sector – Crystal Gazing Into 2023
Tourism Tidbits: Reviewing Some of the Travel & Tourism Industry’s Basic Principles – Part One of a Two-Part Series
Salt Lake City Development Spurs Additional Investor Interest in This Emerging Hotel Market
The Cleveland Market Is on Pace for Full Recovery
HVS Market Pulse – Recent Lodging Trends and Outlook for Atlanta, Georgia
Hotel Occupancy Slows as the Holidays Near
Hotel Owners Turn Their Attention to Renovations
Top Concerns and Trends for Hoteliers in 2022