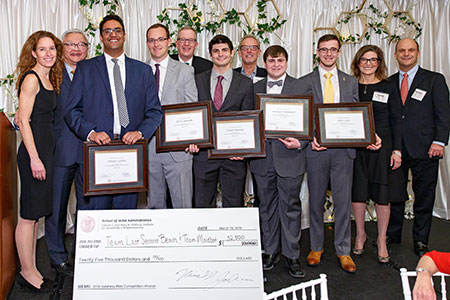 Ithaca, NY, March 30, 2016 – Two student teams' presentations were so strong that the judges in the Cornell Hospitality Business Plan Competition declared a tie. Both teams will be awarded the first-place prize money of $25,000, the largest prize package on campus specifically for current Cornell University students. The co-winners in the 2016 edition of the competition are Team Last Second Beach and Team Maidbot. Team Chill won third place, with a prize of $5,000. A total of five student teams, which have been working on their plans for the entire academic year, presented their business concepts to a judging panel of entrepreneurs. The competition was held during the annual student-run event, Hotel Ezra Cornell.

The teams are composed of primarily students at the School of Hotel Administration. Students from other colleges including the Johnson School, the ILR School, the College of Agriculture and Life Sciences, and the College of Engineering also participated in the competition. The winning teams are:

The Hospitality Business Plan Competition is part of the experiential learning programs of the Leland C. and Mary M. Pillsbury Institute for Hospitality Entrepreneurship at the School of Hotel Administration (SHA). This years' total of over $35,000 in prizes is the largest yet for the competition. The purpose of the competition is to educate the student teams and give them experience in conceptualizing, researching, and articulating a business idea, all skills they will need to successfully launch a business. Throughout the competition, SHA faculty advise the student teams, as do the members of the institute's extensive entrepreneurship network.

In determining the top concepts, judges considered factors such as whether the target market size for the concept is sufficiently large and attractive for the company to eventually reach scale, and whether the proposed business model makes sense, so that the company can actually make money. The final presentations had to be clearly articulated and supported with data relating to potential demand and market barriers.

The competition is supported by gifts from the title sponsor, Stephen Thomson '82, and the originating sponsor, the Sun Family, Stanley '00 and his parents Dennis and Betty. Additional sponsors include platinum sponsors Greg Dollarhyde '80, MBA '81, Hersha Hospitality Trust, and Marriott International; and silver sponsors Elizabeth Shingleton Glomsrud '00 and Barbara Foote Shingleton '75.

The purpose of the Cornell Hospitality Business Plan Competition is to provide an experiential learning opportunity to rising entrepreneurs and assist them in developing a professional business plan in the hospitality industry. The process involves direct interaction with experienced entrepreneurs and venture capital and equity investors.

About the Leland C. and Mary M. Pillsbury Institute for Hospitality Entrepreneurship

The Leland C. and Mary M. Pillsbury Institute for Hospitality Entrepreneurship, which opened in 2006, teams students with seasoned faculty and accomplished entrepreneurs to help them develop the knowledge, skills, and practical experience necessary to pursue their entrepreneurial ambitions. The Pillsbury Institute is also a source of information on creating a hospitality business, managing a small and family-operated business, purchasing a franchise, developing a corporate venture, funding a new venture, and being an innovator.