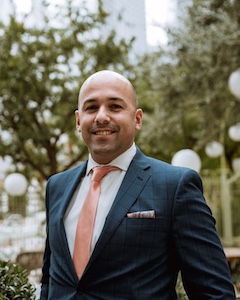 This Marriott Autograph Collection hotel has found its home at the corner of North Narcissus Avenue and Banyan Boulevard, as the nucleus of Flagler Banyan Square and only a stroll away from the buzz of Clematis Street. Currently under construction and on track for its long-awaited reveal by December 2019, The Ben is already stirring up the hype around town and is highly anticipated as the city’s gathering locale where both locals and modern travelers will flock for business and leisure.

What happens in Vegas usually stays there, though Neto is shattering the common misconception. He brings more than 12 years of hospitality experience as he returns to South Florida to join The Ben executive team by way of MGM Resorts International, where he served as Executive Director of Hotel Operations for the luxury property Park MGM. His successful track record and personable nature were spot on for the entertainment capital of the world, and he was the obvious choice to oversee the 550 million dollar rebrand and transformation of the Monte Carlo into Park MGM and NoMad Las Vegas. This revamp also included the Park Theater, now a regular stomping ground for music aficionados, where Lady Gaga, Bruno Mars and Aerosmith are headliners. Additionally, their reimagined arrival experience and VIP program were Neto’s brainchild and streamlined the check-in process at the 3,000-room hotel- no small feat for one of the busiest destinations on the Strip.

Prior to Vegas, Neto spent a year in Hawaii working at Starwood’s luxury Princeville Resort before packing up his leis and transferring to Lisbon with Four Seasons. In 2010, he was handpicked to take the reins at another Four Seasons property across the pond, this time filling the shoes of Front Office Manager at the Four Seasons in Palm Beach, where he hit the ground running and made strides in revenue increase during his first year. Neto also hit an ace when he re-launched and developed the resort’s tennis program, which resulted in improved community engagement and increased revenue for the property.

An established trailblazer, Neto will set the stage for The Ben. He will oversee the pre-opening team, take part in developing the property’s eclectic character and, once open, supervise all operational aspects of the 208-room property, including the restaurant, rooftop bar, flexible event spaces, and ensure overall guest satisfaction.

“The Ben is bringing a new element to West Palm and injecting a dose of modern energy to a traditionally classic city. Rooftop drinks with a killer view, culinary inventions to satisfy the most demanding foodies, modern comfort and a keen eye for detail set The Ben apart and I’m thrilled to be at the forefront of this new take on hospitality that will stir up the city in the best way possible,” said Neto. “From the decor to the Southern hospitality, The Ben will be the local spot local West Palm Beachers will want to visit often and one travelers will want to come back to.”

The Ben is Autograph Collection's first hotel in Palm Beach County and joins the Concord Hospitality portfolio as their 17th property in the state of Florida. As the centerpiece of Flagler Banyan Square, a 435,000 square foot mixed-use lifestyle project developed by local commercial real estate firm Navarro Lowrey, Inc., the hotel will be surrounded by residential, dining, retail and other amenities. Additionally, the property will feature a full service restaurant, rooftop ballroom and a rooftop pool and amenity deck complete with spectacular views of the Palm Harbor Marina, Intracoastal Waterway and Palm Beach Island.

Highly anticipated as the reinvention of a Palm Beach icon, The Ben is West Palm Beach’s newest hotel project, set to open December 2019. The 208-room property will serve as the nucleus of Flagler Banyan Square, with carefully curated design and details that will go hand in hand with an authentic local experience. The Ben takes inspiration from the Ben Trovato, one of the area’s great homes owned by best-selling writer Byrd Spillman Dewey and her husband Fred Dewey, known as the couple that put West Palm Beach on the map. Their home became known as a sentinel point for socialization, conversation, enjoyment and enrichment, and the hotel will channel a similar spirit as a gathering spot for the modern traveler. The one-of-a-kind property will include a full service restaurant, parking garage and rooftop pool with breathtaking views of Palm Beach and the Atlantic Ocean, among other amenities. True to Autograph Collection standards, The Ben is “Exactly Like Nothing Else” both unique in design and thoughtful in spirit. For more information about The Ben visit www.thebenwestpalm.com

As an award-winning hotel development and management company, Concord Hospitality Enterprises Company has spent the last three decades building relationships with investors, partners, and third-party hotel owners on more than $2.5 billion in premium-branded properties across the United States and Canada. As an operator, Concord Hospitality instills value from the ground up, developing and managing with a sustainable viewpoint, a focus on quality and hands-on involvement to ensure long-term profitability and success. Concord Hospitality believes that its people are its greatest strength. With the brightest talent, the most innovative processes and a commitment to giving back to the communities where associates live and work, Concord Hospitality is committed to be a great place to work for all. Visit concordhotels.com for more information.