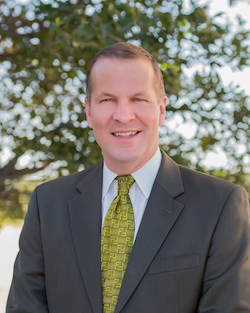 DALLAS – July 10, 2018 – Columbia Sussex, which owns and operates the Dallas Marriott Las Colinas has announced that Clifton Thiebaud, previously Director of Sales for the 364-room Marriott hotel on Lake Carolyn was recently appointed to General Manager. In his new role, he is responsible for 150 employees and the daily operation of all aspects of the hotel, as well as the multi-million-dollar renovation currently underway. Guest rooms have been completed, and the hotel’s public and meeting space is slated for completion in the fall.

Mr. Thiebaud’s rise at the Dallas Marriott Las Colinas hotel began in 2009 as a sales manager and continued in 2010 as Direct of Sales where he spent seven years. His previous hospitality experience includes the opening team of Gaylord Texan in Grapevine, Texas and 14 years in various roles with Club Corporation of America, concluding as General Manager of the areas’ distinguished private club and meeting space. La Cima (“the Top_), which occupies the 26th floor of the Towers of Williams Square. From the restaurant’s panoramic view, Mr. Thiebaud watched the Marriott Las Colinas being built on Lake Carolyn. When the hotel renovation is complete, the public space will reveal the hotel’s picturesque lakeside attributes including outdoor dining and boarding location for classic gondola rides. The hotel offers complimentary Wi-Fi for guests who sign up for Rewards Points, mobile check in and best rate guarantee.

The hotel features 24,000 square feet of meeting space, superb catering and event planners, and choice accommodations for guests. The Irving Convention Center is just a 10-minute walk and anchors a new visitor and entertainment district which sits between the hotel and the center. Visitors to the district can enjoy top touring concert artists, plus local music, movies, eateries, art and culture all within one small footprint in the heart of Irving’s Las Colinas. The Toyota Music Factor is garnering rave reviews with its indoor/outdoor amphitheater – The Live Nation Pavilion, the Alamo Drafthouse Cinema and a 50,000-square foot festival plaza. Both Dallas airports are near the hotel – 8/6 miles from Dallas Fort Worth International (DFW) and 9.4 miles from Dallas Love Field (DAL).

Mr. Thiebaud resides in the small town of Joshua with his wife and two daughters on family farmland where he lived as a child. He gives back to the community through his involvement on the Board of Directors of Kids Who Care.

With more than 500 hotels and resorts in 64 countries and territories around the world, Marriott Hotels is evolving travel through every aspect of the guest’s stay, enabling the next generation to Travel Brilliantly. Bolding transforming itself for mobile and global travelers who blend work and play, Marriot leads the industry with innovations, including the Greatroom lobby and Mobile Guest Services that elevates style & design and Technology. Marriott Hotels is proud to participate in the industry’s award-winning loyalty program, Marriott Rewards® which includes The Ritz Carlton Rewards®. Members can now link accounts with Starwood Preferred Guest® at members.marriott.com for instant elite status matching unlimited points transfer. To learn more visit www.MarriottHotels.com. Stay connected to Marriott Hotels on Facebook, @marriott on Twitter and @marriotthotels on Instagram.