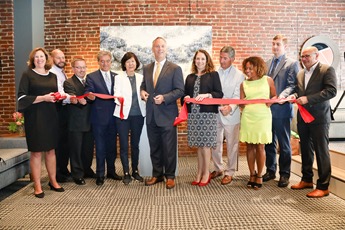 Located at 222 Union Street, the New Bedford Harbor Hotel is part of the Ascend Hotel Collection by Choice Hotels, is developed by Columbus Group LLC, and is managed by Waterford Hotel Group. The owner entity, NB Hotel LLC, is an affiliate of Columbus Group LLC, which is involved in several commercial real estate ventures in the Greater Boston area.

The 70-room, five-story New Bedford Harbor Hotel is the newest hotel in New Bedford featuring contemporary downtown accommodations. The culturally diverse city is known for world-renowned historic areas, architecture and cobblestone streets, feasts and festivals, beaches and boating, and is home to the Whaling National Historic Park. The City has a number of initiatives, including Destination New Bedford, to promote tourism in the area.

The hotel’s management team includes General Manager Dewan Kashem and Director of Sales Chrisanne Tyrrell. As General Manager, Kashem is responsible for all aspects of the hotel’s operations. He joins Waterford Hotel Group with more than 20 years of hospitality experience. He began his career in food and beverage, holding a variety of positions including General Manager of the Four Diamond L’Epicureo in Providence, RI. Kashem later became a Floating Hotel General Manager that allowed him to travel across the United States while gaining valuable brand experience. Most recently, Kashem was the General Manager of Outlets at the Marriott Providence Downtown.

As Director of Sales, Tyrrell is responsible for all sales activities, including seeking new accounts and growing client relationships. She returns to Waterford Hotel Group with more than 20 years of hospitality and sales experience. She began her career with Waterford Hotel Group as Operations Assistant to the President. Tyrrell left Waterford Hotel Group to become the Front Office Manager for Hotel Viking in Newport, RI. She then moved on to become the Director of Sales and Marketing at the Intercontinental Hotels Group in Middleboro, MA. Most recently, Tyrrell was in Event and Membership Sales for the Warwick Country Club in Warwick, RI.

“We are thrilled to introduce the New Bedford Harbor Hotel to the community. Everyone is welcome to enjoy a gourmet lunch or dinner, or just to get a coffee or cocktail,” said Kashem. “The hotel offers beautiful accommodations, a relaxing lounge and gourmet bar/restaurant, and well-appointed event space ideally located in the heart of New Bedford. We look forward to providing exemplary service to our local community and visitors to the region.”

The 70-room New Bedford Harbor Hotel is the newest hotel in the vibrant and culturally rich city of New Bedford and the South Coast area of Massachusetts. The hotel is located minutes from the Seastreak Ferry allowing easy access to Martha’s Vineyard and Nantucket. The guestrooms provide amenities such as mini refrigerators, complimentary high-speed Internet access, 40” flat screen televisions, and premium bedding. The hotel also offers a fitness center, open concept lobby with lounge/bar, and complimentary continental daily breakfast. The hotel is situated in the center of downtown New Bedford, near the airport, business park and historic landmark attractions such as New Bedford Whaling Museum and the Whaling National Historic Park. For more information, visit newbedfordharborhotel.com.