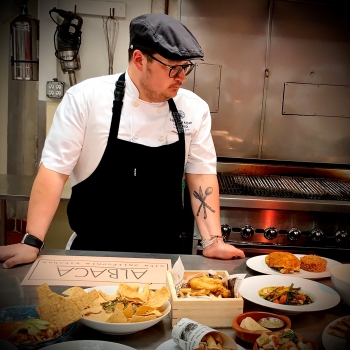 Aaron brings 14 years of culinary experience to his new role. He began his culinary career in Los Angeles at Le Cordon Bleu, and upon graduation, he moved to Mexico City to work alongside renowned chefs Mikel Alonso and Bruno Oteiza at BIKO. Soon after, Aaron opened his own seafood restaurant in Mexico City before joining the Marriott family in San Diego. He created an award-winning Bohemian lifestyle restaurant, ALBACA, inside the Coronado Island Marriott Resort & Spa, which generated over $200K in incremental revenue over 2 years. Most recently, Aaron served as the executive chef at the Inn at Mission San Juan Capistrano, where he worked on developing and designing the property’s Great Room restaurant, Ysidora, while infusing his passion for Mexican cuisine with the elevated dining experience. At 21 Square Bar + Kitchen, the Californian coastal cuisine inspired by local ingredients will allow Aaron to bring to life evolved menu items drawing from his experience as a vegan chef.

Chef Aaron Obregon is a F1 enthusiast and a Barcelona FC fan. In his spare time, he enjoys spending time with his wife Melissa and going “hotel hopping”.