CHART Scholarship Recipient Creates a Recipe for His Life

Home/CHART Scholarship Recipient Creates a Recipe for His Life

CHART Scholarship Recipient Creates a Recipe for His Life 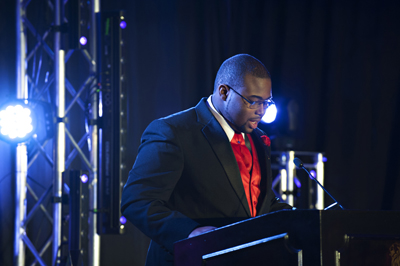 Orlando, Florida, August 2015—Josiah Sanders, a graduate of CBI Tech High School at Rockland BOCES in West Nyack, New York, is the recipient of a $2500 scholarship awarded by the Council of Hotel and Restaurant Trainers (CHART) and the American Hotel & Lodging Educational Foundation. The scholarship was presented by American Hotel & Lodging Educational Institute senior vice president of sales Brenda Moons, during the CHART summer conference in New Orleans, Louisiana.

In his scholarship application, Sanders identified himself as a special needs student who is determined to “create a masterpiece despite the challenges of a learning disability.” Noting that there was “no pre-planned recipe card” with the instructions for his particular situation, he set out “to create what would become Chef JoJo’s Journey Recipe.” That recipe has included culinary arts classes and AHLEI’s Skills, Tasks, and Results Training (START) curriculum at Rockland BOCES, participation in Skills USA as president of the Culinary Arts Club, employment as a cook at Annie’s Dream Cuisine, and volunteering at the Mount Vernon City School District and at his church. He will begin his college education at Johnson & Wales University in Providence, Rhode Island this fall.

Sanders outlined ambitious goals for his life, describing “a dessert buffet as the fulfillment of my ultimate dreams becomes a reality.” Those dreams include owning a restaurant called “Kings and Queens,” that would hire staff with disabilities to operate and potentially manage the establishment, and starting “Life in the Kitchen,” an education center to train students with special needs in the culinary arts. Finally, “believing that students with learning disabilities have the appetite and ambition to change the world,” he envisions himself returning to secondary education at a place like Rockland BOCES to teach culinary arts to students like him.

“They would see firsthand that there is hope for students who just don’t learn through the traditional manner schools teach,” he wrote. “All students should be educated equally and inspired to chart their specific journey, enhancing essences of who they were created to be along the way.”

Established in 1953 as the nonprofit education and training arm of the American Hotel & Lodging Association (AH&LA), AHLEIs mission is to continue being the preferred provider to the lodging industry, hospitality schools, and related hospitality industries by developing and providing quality resources to educate, develop, and certify hospitality professionals worldwide.