Can We Control Our Own Fate? Hospitality Education and Corporations Will Have to Change Significantly

Home/Can We Control Our Own Fate? Hospitality Education and Corporations Will Have to Change Significantly

Today's News Study: In Era of COVID-19, Airlines and Airports Must Do More to Accommodate Stressed-Out Passengers

Can We Control Our Own Fate? Hospitality Education and Corporations Will Have to Change Significantly

In a world where nothing is permanent except change, success is built each day. And in order to do that, the world of education and corporations will have to change significantly.

The emergence of new trades, it's a formidable opportunity; the problem this leads to is that there are no (whether not yet or not enough) professors able to teach these trades. And how could it be any different when a discipline or technology has been around for only a few months or years? And inversely, obsolescence lurks: regardless of the field, we increasingly run the risk of leading cohorts of students in a direction where they would rapidly find themselves outpaced.

Since the needs are structurally ahead of the educational offer, and since these needs themselves are emerging among the unforeseeable flood of innovations, the market, meaning the businesses themselves, will have to seriously take control over training. Whether initial or continuing, internal or external, its importance in the corporate world is expected to grow. Digital champions and a few giants in traditional trades have understood this well, and corporate universities and campuses have been flourishing for some time already.

The real need is for bespoke training. For the right people in the right place at the right time, because needs disappear as quickly as they arise.

The problem is that making learning available at any given moment comes with a high cost. Since they have the best ability to do so, it is probable that in the end schools and institutions will reinvent themselves, becoming service providers able to tailor programs to fit corporate needs, flexible structures that can create or eliminate classes and entire programs in a matter of weeks, or even keep a hyperactive vigil –even more than today– to the point of continuously interacting with R&D services, whose weight grows unceasingly in the corporate world.

After all, innovation –a vital necessity– goes hand in hand with those who will be in charge of implementing it, making it operational and following up. This is why individuals are the focal point. Because in companies and football teams alike, it is important to work as a team first to guarantee the success of the whole (which goes beyond all egos and lasts longer than those who bear it). The key to success is to know how to identify new talents and make them progress: strong individuals like Neymar upon whom the entire team can rely and who boost the whole.

Like top athletes, employees of the future will have to be people who are able to train by themselves (under a trainer), who know how to constrain themselves to a work discipline. At the same time, the worker learns and the student works: one could almost call it a modern form of exchange, mentoring…

To study, from Latin studeo, which also meant "apply oneself to", "to work on zealously", will undergo a revolution. As the planet returns to its origins, individuals will no longer receive, but work hard to provide themselves with their own teachings. In the era of the smartphone and access to information around the clock, nothing could be easier. Lectures in which one listens and follows along without speaking are things of the past: formerly passive, the student is (re)becoming active. Rather than receive, one discovers, explores, for oneself: each individual must be the creator of his own success. It is also necessary to be able to evaluate the efficiency of one's training method through the results obtained: "know yourself", Socrates' injunction has never been so fitting.

For businesses and educational settings alike, empowerment, the ability to transmit the capacity of autonomous learning, will be key factors to the success of training in the future. Didn't Gandhi say; "Real education consists in drawing the best out of oneself?" 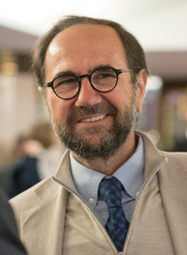 Georges Panayotis is President of MKG Consulting. Born in a family of hoteliers for three generations, Georges Panayotis, left Greece at the age of 18 to pursue his studies in Political Sciences and to obtain his Master in Management at the French University of Paris Dauphine. He then joined the Novotel chain, which will become the Accor Group, to manage the International Marketing Division. After developing specific marketing tools for the hotel industry, he left the group in 1986 to start his own company, MKG Conseil, now MKG Group. In twenty years, the group has become the European leader in studies and consulting for the Hospitality industry. The company employs over 70 people in four departments: marketing studies, database, quality control and trade press, with two publications HTR Magazine and Hotel Restaurant Weekly.

The company helped the development of over 2,000 hotels in France and in Europe, with offices in Paris, Cyprus and London. Georges Panyotis is the founder of the Worldwide Hospitality Awards and the Hotel Makers Forum, and the author of several publications on Marketing and Operations in the hotel business, He is a regular consultant for several television channels, among which Bloomberg Television, and radio networks.