Caesars to Enhance and Upgrade More than 5,700 Rooms in 2016 at Four Las Vegas Resorts and Three Regional Resorts

Home/Caesars to Enhance and Upgrade More than 5,700 Rooms in 2016 at Four Las Vegas Resorts and Three Regional Resorts

Caesars to Enhance and Upgrade More than 5,700 Rooms in 2016 at Four Las Vegas Resorts and Three Regional Resorts 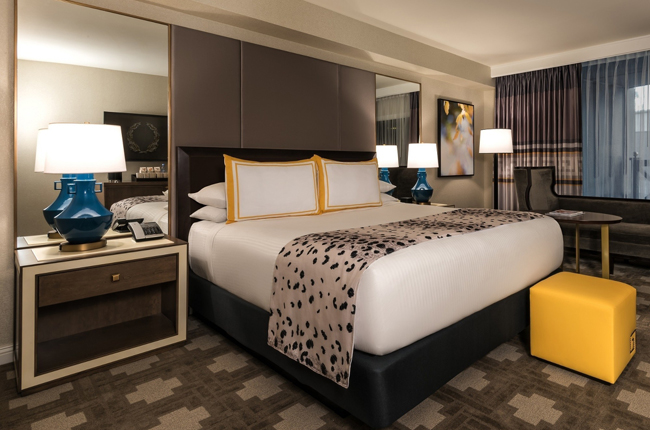 LAS VEGAS, March 9, 2016 — Caesars Entertainment Corporation (NASDAQ: CZR) announced plans to upgrade more than 4,800 hotel rooms this year at four of its Las Vegas resorts, and more than 900 rooms at three regional casinos totaling more than 5,700 owned or managed rooms across the enterprise. This renovation effort represents approximately 20% of rooms in Las Vegas and 15% of total rooms throughout the company. At the end of 2016, following the completion of this series of room renovations, Caesars Entertainment will have updated more than 10,000 hotel rooms in the last three years.

These resort upgrades include the transformation of the original tower at Caesars Palace to create the Julius Tower as well as the refurbishment of the resort's Augustus Tower. Additional room upgrades will include Planet Hollywood Resort & Casino, Paris Las Vegas and Harrah's Las Vegas. In the regional markets Harrah's Gulf Coast, Caesars Atlantic City and Horseshoe Tunica will complete room upgrades. These investments in the infrastructure across the enterprise will enhance the company's long-term performance in hospitality.

"These enhancements will substantially improve room product at four of our resorts in Las Vegas, and three regional casinos consistent with our commitment to exceed our guests' expectations," said Mark P. Frissora, President and Chief Executive Officer of Caesars Entertainment. "We are re-investing in our room product to ensure that our guests' in-room experience perfectly aligns with the extraordinary entertainment offerings we have developed and upgraded in recent years."

These room enhancements demonstrate Caesars Entertainment's commitment to the Las Vegas market and key regional markets and add to the substantial investments in restaurants and entertainment offerings made in recent years.

"Our Las Vegas properties are at the heart of the Las Vegas Strip, anchored by the iconic Caesars Palace, which is preparing to celebrate its 50th anniversary," Frissora said. "On the east side, our footprint is centered around the High Roller, the world's tallest observation wheel, and surrounded by the LINQ Promenade. With so much activity at the center of the Strip, we are excited to bring our guests these planned room enhancements."

In the past five years, Caesars Entertainment has made material investments in Las Vegas, including the development of The LINQ Promenade and the High Roller, The Cromwell, the only standalone boutique hotel on the Las Vegas Strip, the world's first Nobu Hotel, the 642-room Octavius Tower including six luxury villas, the re-creation of the state-of the-art AXIS Theater which is home to Britney Spears, along with the opening of Giada, the only restaurant of the famed Chef Giada De Laurentiis.

Several Caesars Entertainment resorts in Las Vegas have recently announced new restaurants and shows including MR CHOW at Caesars Palace, which opened in December 2015, along with the debut of international superstar Jennifer Lopez at The AXIS at Planet Hollywood Resort & Casino last month.

The room and suite upgrades at all four Las Vegas hotels will include modern room designs, enhanced in-room electronics, new furnishings, and soft goods. All rooms will feature large, 50" TV's or more complete with fully refurbished bathrooms along with elevated in-room amenities and services. For example, the suites at Planet Hollywood Resort & Casino will offer a fresh design complete with retro round sleeping beds and hanging daybeds. Caesars Entertainment Corporation (CEC) is the world's most diversified casino-entertainment provider and the most geographically diverse U.S. casino-entertainment company. CEC is mainly comprised of the following three entities: the majority owned operating subsidiary Caesars Entertainment Operating Company, wholly owned Caesars Entertainment Resort Properties and Caesars Growth Properties, in which we hold a variable economic interest. Since its beginning in Reno, Nevada, 75 years ago, CEC has grown through development of new resorts, expansions and acquisitions and its portfolio of subsidiaries now operate 50 casinos in 13 U.S. states and five countries. CEC's resorts operate primarily under the Caesars®, Harrah's® and Horseshoe® brand names. CEC's portfolio also includes the London Clubs International Limited family of casinos. CEC is focused on building loyalty and value with its guests through a unique combination of great service, excellent products, unsurpassed distribution, operational excellence and technology leadership. CEC is committed to environmental sustainability and energy conservation and recognizes the importance of being a responsible steward of the environment. For more information, please visit www.caesars.com.

Such risks and uncertainties include, but are not limited to, the following factors, as well as other factors described from time to time in the reports filed by CEC with the Securities and Exchange Commission (including the sections entitled "Risk Factors" and "Management's Discussion and Analysis of Financial Condition and Results of Operations" contained therein):  that all the conditions to completion of the project are met; receipt in a timely manner of all necessary governmental approvals, licenses and permits; the effects of local and national economic, credit and capital market conditions on the economy in general, and on the gaming and hotel and restaurant industries in particular; construction factors related to the project, including delays, increased costs of labor and materials, availability of labor and materials, zoning issues, and building permit issues; the ability to timely and cost-effectively integrate the project into our operations at CEC; changes in laws, including increased tax rates, smoking bans, regulations, third-party relations and approvals related to the project and CEC; and our ability to recoup costs of the capital investment of this project through higher revenues.