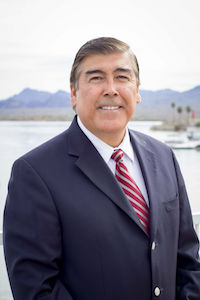 “It is with great pleasure that I formally welcome Frank to our company,” said Mr. Champion. “he has brought vast and successful leadership experience to our resort, and understands the property’s market well, having previously served in resort areas within Arizona.”

Frank Casarez, Jr., brings extensive senior property leadership experience to his new position with The Nautical Beachfront Resort. He was previously general manager and managing director of sales for the Sheraton Crescent Hotel of Phoenix, Arizona. Prior to this he served as area manager and general manager for the Resort at the Mountain in Welches, Oregon. Earlier Mr. Casarez held general manager, assistant general manager, and other leadership positions for hotels and resorts in markets across the country, including Portland, Houston, Los Angeles and Tucson. Mr. Casarez attended Santa Monica Junior College and San Diego University where he focused in Graphic Arts management. He has relocated to Lake Havasu City, Arizona.

Benchmark Resorts & Hotels® features the finest in lodging, dining, recreational and meeting accommodations.  Featuring unique and distinctive properties renown for exceptional service and for creating unforgettable memory-making experiences, it is the signature portfolio of BENCHMARK®, a global hospitality company, which has been a leading US-based hospitality management company for nearly 40 years.  Many Benchmark Resort & Hotels' properties are certified by IACC, the association that represents the finest meeting venues and services globally, and many have also been recognized with the coveted Benchmark Conference Centers® certification of meeting excellence.  www.benchmarkresortsandhotels.com.  To become a fan on Facebook, visit www.facebook.com/BenchmarkResortsandHotels  Follow us on Twitter at https://twitter.com/BenchmarkHotels, on Instagram at www.instagram.com/benchmarkresortsandhotels, and on Pinterest at  www.pinterest.com/benchmarkhotels.