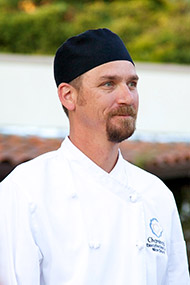 “This is a wonderful promotion for Nicholas,” said Mr. Herbst. “He has worked in all areas of our kitchens, and is a natural leader of his team. He also brings vast knowledge of the culinary preferences of our market to his new role. We congratulate Chef Church on his new position with our resort!”

Nicholas Church is a veteran of the culinary arts and of Chaminade Resort & Spa. For nearly two decades he actively contributed in the resort’s kitchens, initially as line cook, and eventually as executive sous chef. In 2012, he exercised his entrepreneurial aspirations and a life-long dream, opening his own restaurant, Mama Mia's, located in Felton, California. Subsequently he returned to Chaminade assuming his previous role as executive sous chef.

Nestled on 300 acres in the Santa Cruz Mountains and overlooking Monterey Bay, the AAA Four Diamond Chaminade Resort & Spa is an ideal destination for families, friends or couples seeking a leisurely getaway that is experientially Santa Cruz.  The resort features 156 newly renovated accommodations including 44 suites, two restaurants, a sparkling pool, four tennis courts, executive fitness center and a full-service spa.  The historic Mission-style resort is an IACC approved meeting destination offering 12,000 square feet of meeting and event space.  Chaminade Resort & Spa is also pet friendly.  For reservations and information call 800-283-6569 or visit www.chaminade.com.  To become a fan, visit us on Facebook at www.facebook.com/ChaminadeResort or to follow us on Twitter at www.twitter.com/chaminaderesort.

Benchmark Resorts & Hotels®represents the finest in lodging, dining, recreational and meeting accommodations. Many are certified by the International Association of Conference Centres, the leading professional organization governing the multi-billion dollar conference center industry on five continents, and many have also been recognized with the coveted Benchmark Conference Centers®certification of meeting excellence.  Benchmark Resorts & Hotels deliver highly specialized service that anticipates guests’ needs and ensures a hospitality experience unsurpassed and long remembered. www.benchmarkresortsandhotels.com.  To become a fan on Facebook, visit www.facebook.com/BenchmarkResortsandHotels, or follow us on Twitter at www.twitter.com/BenchmarkHotels.