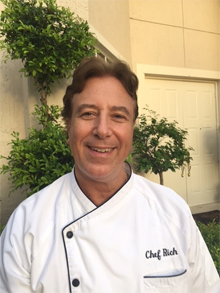 “Chef Rich has a great vision and exciting culinary plans for Bahia Mar and for Fort Lauderdale Beach’s foodie scene,” said James Tate, co-owner and CEO of Tate Capital. “He brings a great deal of talent, enthusiasm and creativity to every dish he plates, and we’re thrilled to have him on board.”

Chef Rich, overseeing all aspects of the property’s culinary experiences, is focusing on fresh, local ingredients and unique flavor palettes for Bahia Mar’s new culinary program. His approach draws inspiration from the property’s prime location between the Intracoastal and the Atlantic Ocean and will speak to the city’s nautical ambiance.

“I am looking forward to elevating and executing the variety and quality of food offered at Bahia Mar,” said Chef Rich. “My goal is to create healthy and diverse menu options that highlight Florida flavors by incorporating local produce, emphasizing fresh flavors, combinations and ingredients.”

Chef Rich has an extensive background in the culinary arts and his led programs at hotels such as the Holiday Inn Plantation and the Sheraton Boca Raton. For 23 years, he directed food operations for one of South Florida's most prestigious country clubs, Westview Country Club, which was recognized for having the best cuisine in its area. Most recently, he served as head chef at La Gorce Country Club, an exclusive property drawing patrons from Dade, Broward and Palm Beach Counties.

Bahia Mar -- a DoubleTree by Hilton -- is the iconic centerpiece of Fort Lauderdale Beach nestled between the Intracoastal Waterway and the Atlantic Ocean. The 40-acre, 296-room property with two ocean view suites has completed a $7 million redesign in November 2017. The renovation has upgraded the hotel’s main tower including 181 guestrooms, common spaces and 28,000 sq. ft. of meeting space. Known for being the home of the Fort Lauderdale International Boat Show, Bahia Mar features an impressive 250-slip marina that accommodates 100 mega-yachts, offers 3,000 ft. of parallel dockage and boasts more than four miles of floating docks. The marina is one component of the hotel’s range of amenities and services, which also includes a swimming pool, tennis courts, onsite shops, The Market and its restaurant, Breezes. Guests and locals alike are welcome to enjoy the day in the ocean; hang out by the popular pool bar Waves Rooftop Pool Bar and Grill; and participate in the property’s many fun-filled activities and programming like tennis, bike riding, fishing excursions and various water sports. Bahia Mar has an ideal location in Fort Lauderdale Beach, sitting directly across from the sandy white beach. The hotel is also in walking distance to Fort Lauderdale’s well-known attractions including the International Swimming Hall of Fame, Las Olas Boulevard and the city’s popular water taxi route and is a short drive to the Fort Lauderdale International Airport and Port Everglades Cruise Terminal.

About DoubleTree by Hilton

Hilton (NYSE: HLT) is a leading global hospitality company, with a portfolio of 14 world-class brands comprising more than 5,200 properties with more than 856,000 rooms, in 105 countries and territories. Hilton is dedicated to fulfilling its mission to be the world’s most hospitable company by delivering exceptional experiences – every hotel, every guest, every time. The company's portfolio includes Hilton Hotels & Resorts, Waldorf Astoria Hotels & Resorts, Conrad Hotels & Resorts, Canopy by Hilton, Curio Collection by Hilton, DoubleTree by Hilton, Tapestry Collection by Hilton, Embassy Suites by Hilton, Hilton Garden Inn, Hampton by Hilton, Tru by Hilton, Homewood Suites by Hilton, Home2 Suites by Hilton and Hilton Grand Vacations. The company also manages an award-winning customer loyalty program, Hilton Honors. Hilton Honors members who book directly through preferred Hilton channels have access to instant benefits, including a flexible payment slider that allows members to choose exactly how many Points to combine with money, an exclusive member discount that can’t be found anywhere else, and free standard Wi-Fi. Visit newsroom.hilton.com for more information, and connect with Hilton on Facebook, Twitter, LinkedIn, Instagram and YouTube.