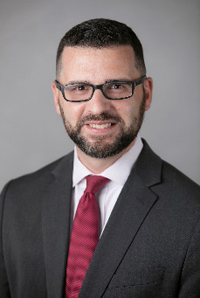 Dallas, Tex. – July 18, 2017 – Atrium Hospitality has tapped Obed H. Morales to serve as general manager of Embassy Suites by Hilton Dallas Fort Worth North, a 329-suite hotel in Grapevine, Tex., just two miles from Dallas Fort Worth International Airport. He brings to his position 15 years of managerial experience at all-suite hotels – 14 of them with the Embassy Suites brand.

In explaining his decision to join Atrium Hospitality, Morales said “I am impressed by Atrium’s innovative approach to revenue management and sales and marketing, as well as their sophisticated operations and payroll management platform. The company’s vision of its future is something that excites me very much.” He continued, “Atrium is a proponent of promoting from within and I see great potential growth not only for Atrium but for my own career and those of other associates. Of the company’s values – perseverance, respect, service, and teamwork – perseverance is one that strikes me as particularly apt. Atrium is a young company that is steadily moving forward and I believe it will be one of the biggest hotel companies in the U.S. in the next five years.”

Atrium Hospitality is a leading hotel and asset management company headquartered in Alpharetta, GA.  The company oversees a portfolio of more than 50 hotels in 26 states, licensed primarily through the Marriott, Hilton and Intercontinental brand families. For more information, visit www.atriumhospitality.com

About Embassy Suites by Hilton

Embassy Suites by Hilton, one of Hilton’s 14 market-leading brands, is dedicated to delivering what matters most to travelers. The full service, upscale brand offers two-room suites, free made-to-order breakfast and a nightly two-hour reception with complimentary drinks and snacks. Both leisure and business travelers looking for a relaxed, yet sophisticated experience will feel right at home with brand-standard amenities like inviting atriums and complimentary 24-hour business and fitness centers. Embassy Suites by Hilton has more than 230 hotels with 49 in the pipeline. Hilton Honors members who book directly through preferred Hilton channels have access to instant benefits, including a flexible payment slider that allows members to choose nearly any combination of Points and money to book a stay, an exclusive member discount that can’t be found anywhere else, free standard Wi-Fi and digital amenities like digital check-in with room selection and Digital Key (select locations) available exclusively through the industry-leading Hilton Honors app. For more information, visit embassysuites.com or news.embassysuites.com. Connect online with Embassy Suites by Hilton at Facebook, Twitter and Instagram.

Hilton (NYSE: HLT) is a leading global hospitality company, with a portfolio of 14 world-class brands comprising nearly 5,000 properties with more than 812,000 rooms in 103 countries and territories. Hilton is dedicated to fulfilling its mission to be the world’s most hospitable company by delivering exceptional experiences – every hotel, every guest, every time. The company's portfolio includes Hilton Hotels & Resorts, Waldorf Astoria Hotels & Resorts, Conrad Hotels & Resorts, Canopy by Hilton, Curio Collection by Hilton™, DoubleTree by Hilton, Tapestry Collection by Hilton™, Embassy Suites by Hilton, Hilton Garden Inn, Hampton by Hilton, Tru by Hilton, Homewood Suites by Hilton, Home2 Suites by Hilton and Hilton Grand Vacations. The company also manages an award-winning customer loyalty program, Hilton Honors. Hilton Honors members who book directly through preferred Hilton channels have access to instant benefits, including a flexible payment slider that allows members to choose exactly how many Points to combine with money, an exclusive member discount that can’t be found anywhere else and free standard Wi-Fi. Visit newsroom.hilton.com for more information and connect with Hilton on Facebook, Twitter, LinkedIn, Instagram, and YouTube.