CEO Renie Cavallari was recognized at the 2017 Stevie® Awards for Women in Business event in New York City last week.

PHOENIX – November 20, 2017 – Aspire. People. Performance. Profits has been named the winner of a Bronze Stevie® Award in the Most Innovative Company of the Year (10 or less employees) category in the 13th annual Stevie Awards for Women in Business. This is the 12th consecutive year Aspire has been recognized for innovation.

The Stevie Awards for Women in Business are the world’s top honors for female entrepreneurs, executives, employees and the organizations they run. All individuals and organizations worldwide are eligible to submit nominations – public and private, for-profit and non-profit, large and small. The 2017 awards received entries from 25 nations and territories.

Nicknamed the Stevies for the Greek word for “crowned,” the awards were presented to winners last Friday evening during a dinner event attended by more than 500 people at the Marriott Marquis Hotel in New York City. The event was broadcast via Livestream.

More than 1,500 nominations from organizations of all sizes and in virtually every industry were submitted this year for consideration in more than 90 categories. Stevie Award winners were selected by more than 170 executives worldwide who participated in the judging process.

Aspire CEO Renie Cavallari said, "We are only as relevant as our clients are so we will continue to imagine, innovate, and instigate change—both with them and on their behalf—to inspire achievement of their goals. We are honored to be recognized for challenging the status quo."

This year's Stevie® was awarded to Aspire for development of the aspire competency set, a researched and tested model for engaging employees and consistently moving them to higher performance levels. You can view Aspire's entry here.

Details about the Stevie Awards for Women in Business and the list of Stevie Award winners are available at www.StevieAwards.com/Women. 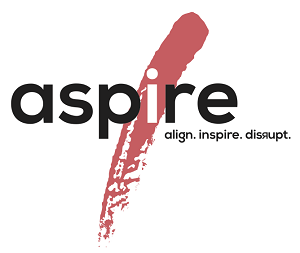 Founded in 1995 by Renie Cavallari, Aspire is an internationally recognized brand unlocking the potential of service-oriented businesses by challenging the status quo and coaching people and teams to achieve their goals and crush the competition.

About the Stevie Awards