As we move past the one year mark when lockdowns began in the United States, Knowland will now be comparing Average Attendees and Average Space Used market data to its 2019 numbers. As bigger cities such as New York and Las Vegas begin to re-open to pre-COVID standards, we anticipate group volume to increase significantly in the coming months. This is another positive sign that meetings are happening and sales teams need to be prepared to manage the sales marathon heading their way.

•  Average attendees – The average number of attendees in April 2021 was 63, compared to 74 in April 2019, a positive sign that meetings are on the rise and attendee numbers are coming back to 2019 levels. 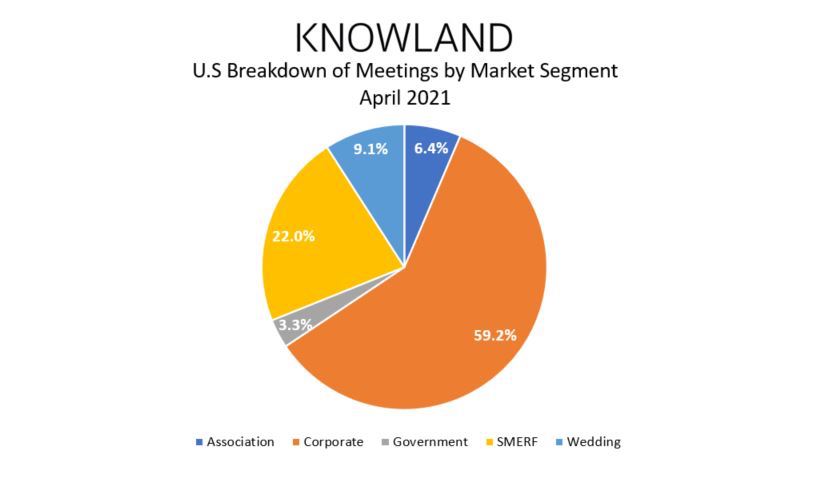 Kristi White, vice president of product management, Knowland, said: “April continued its path of improvement. Four of the top growth markets were impacted significantly by COVID restrictions early in the year. However, since restrictions loosened, they have rebounded quickly. Additionally, meeting sizes are stabilizing to prior year levels. Over the next few months – as more markets loosen up – meeting numbers and size should increase even more.”

Knowland is the leader in AI-powered group business data for hotels, convention and visitor bureaus (CVBs), conference centers and other meeting venues and the driver behind adopting a Proactive Group Sales Strategy.  With the industry's largest historical database of actualized events, thousands of customers trust Knowland to sell group smarter and maximize their revenue. Knowland operates globally and is headquartered in Rosslyn, VA. To learn more about our suite of solutions, please visit www.knowland.com or follow us on Twitter @knowlandgroup