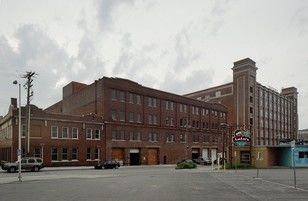 “We look forward to unveiling our plans to transform these incredible buildings into a destination that thoughtfully embraces the history and the character of the community,” says Mario Tricoci, Aparium Chief Executive Officer and Managing Partner. “We’re thrilled to be a part of a flourishing, culturally rich, and dynamic neighborhood in Kansas City, known for its art gallery district and renowned culinary scene that welcomes locals and travelers alike to experience a new destination.”

Adds David Dowell, AIA, principal of el dorado inc, “This project is unfolding at a pivotal moment in the renaissance of urban Kansas City, specifically the Crossroads Arts District. It’s going to be a great gathering place for locals and visitors in one of the neighborhood’s irreplaceable, vintage warehouse buildings. We couldn’t be more thrilled to be a part of it.”

The building was originally constructed in 1911 as a bottling and distribution plant for The Pabst Brewing Company. The company expanded its offices with the addition of what later became known as the Pendergast Building, which was named for political boss Tom Pendergast, whose Pendergast Distilling Company leased the building in the 1920s. Pendergast Distilling Company sold near-beer and bottled water during the Prohibition Era and was “rumored” to run an elaborate bootleg liquor operation in that location. Later, the Pabst building served as a warehouse for the Jones Store Company and then Davidson Furniture Company while the Pendergast building became a warehouse for various furniture and hardware companies.

This joint venture adds to Aparium’s collection of independently-branded properties developed to become an integral component of each community, and in many cases bringing new life to historic buildings. Aparium Hotel Group’s portfolio consists of a mixture of owned, operated, and developed properties. Hotels in which the company has ownership, part-ownership, and manages operations include The Iron Horse Hotel in Milwaukee, WI, a 100-year-old warehouse transformed to a one-of-a-kind hotel; Hotel Covington in Covington, KY (opening 2016); Detroit Foundation Hotel located in Detroit’s historic Fire Department Headquarters (opening 2016); and The Hewing Hotel in Minneapolis’ Jackson Building (opening 2016). Managed properties include The Charmant Hotel in the historic former Joseph B. Funke Candy Co. in La Crosse, WI, opening this summer; and The MC Hotel in Montclair, NJ (opening 2016).

Founded in 2012, Aparium Hotel Group is a new kind of hotel brand, led by experienced professionals in hotel development, management and marketing who came together with the belief that great hotels are a destination sought out by travelers and a favorite place for locals. Inspired by its hotel communities, Aparium creates an authentic crossroads for travelers and locals alike to enjoy unique communal experiences fueled by genuine and intuitive service  a philosophy Aparium calls translocal hospitality. To learn more about Aparium Hotel Group, visit www.aparium.com or call, 312.275.1080.

Agman Partners is a multi-strategy investment firm focused on fundamental value. Agnostic to industry and geography, the fund has the flexibility to invest directly and through partnerships across asset classes and stages of development. Agman Partners emphasizes a long-term perspective to its investment approach. For more information, please visit www.agmanpartners.com.