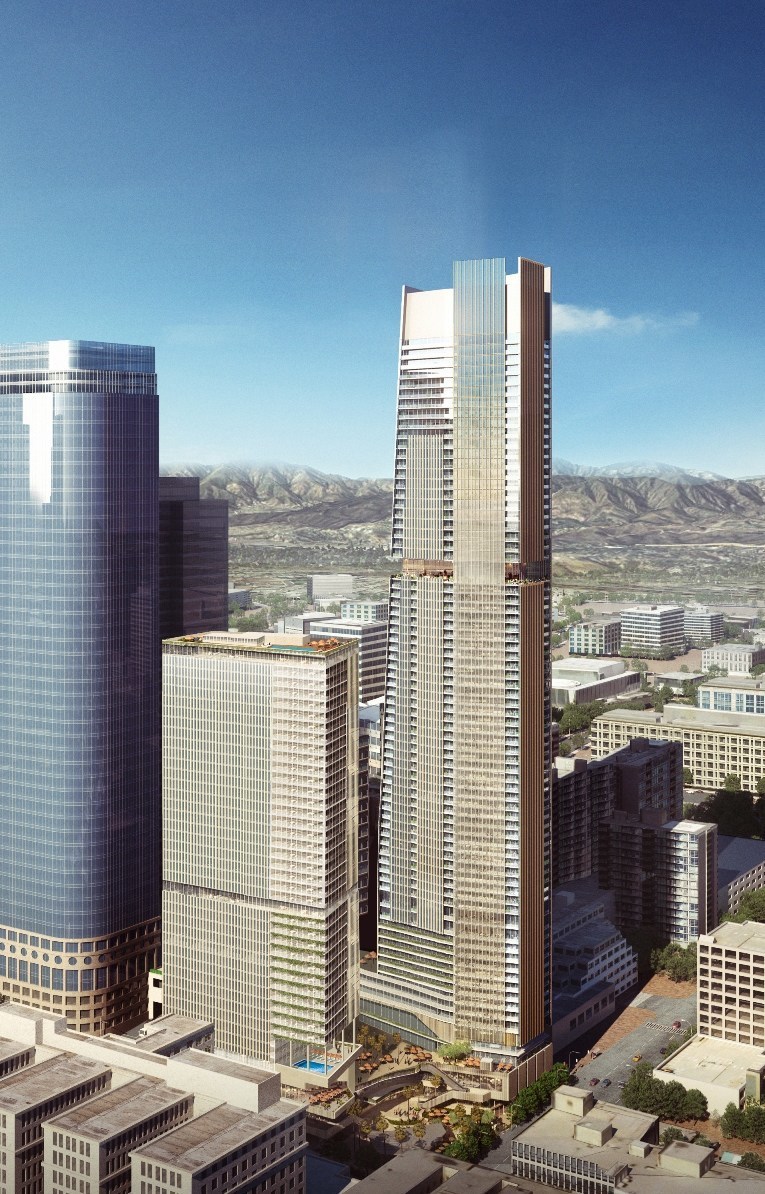 MacFarlane and Peebles are majority-owner principals of Angels Landing Partners, LLC, the development partnership responsible for conceiving, designing, building, and operating Angels Landing. The partnership was officially selected by L.A. City officials at the conclusion of the city’s competitive bid process in 2017. Their partnership’s intentions are firmly focused on completing construction of Angels Landing before elite athletes, sports officials and tourists worldwide converge in L.A. for the 2028 Olympic Summer Games.

Victor B. MacFarlane, chairman and CEO, MacFarlane Partners said, “Angels Landing aligns well with many of the projects we have built in the past 30 years throughout the U.S., including two residential developments recently completed near Pershing Square.”

“The foundation of our business has always been to strengthen communities where we do business,” Mr. MacFarlane said. “We believe we can help communities prosper. We know Angels Landing will have a significant positive impact on L.A.’s economy. The ripple effect of Angels Landing’s substantial economic and employment activity will reverberate throughout L.A. County by providing good-paying union jobs to construct our hotel project and extensive career opportunities when the project is completed, and its hotels are open to the public. We have spent more than $10 million to move our project forward. We’re not letting the coronavirus pandemic slow us down. We anticipate our project entitlement this year,” he added.

Angels Landing is comprised of two towers, each anchored by its own five-star hotel. In addition to the hotels, the development will feature an expansive modern urban park – known as Angels Landing Plaza – designed to serve as a pedestrian-centered, transit-adjacent, open space environment in the heart of downtown L.A.

R. Donahue Peebles, Chairman and CEO, The Peebles Corporation said, “Equity and inclusion are bedrock principles at the Peebles Corporation. My success is predicated on opportunities I received because of those two important tenets. I have built an impressive collection of commercial and residential projects in New York, Washington, D.C., Miami, and other U.S. cities.”

“In each city, I’ve been most excited about using my influence to empower Black-owned, Latino-owned, and women-owned business leaders. My company works diligently to help minority-owned enterprises grow their businesses through procurement contracts established through our development projects,” Mr. Peebles said.

According to an analysis prepared by BJH Advisors, LLC., more than 8,300 new jobs will be created during Angels Landing’s project design and construction. The New York City-based firm’s report estimates Angels Landing would additionally create more than 800 permanent jobs in downtown L.A. An estimated 500 jobs would be created by vendors in the L.A. County region providing good and services to the two luxury hotels.

In addition to new job creation, the BJH Advisors analysis projects Angels Landing would give L.A.’s local economy a $1.6 billion boost and contribute $731 million to local worker’s earnings during its construction. The project would generate as estimated 12 million in recurring tax revenues and $2.4 million annually in local property tax revenues, according to the report.

“With Angels Landing, the transformative impact of empowerment and economic inclusion will be felt by an array of businesses, including Latino- and Asian-owned businesses. We have committed to a goal of 30% M/WBE contracting across the board for our project. We’re raising the bar for economic inclusion for development projects in Los Angeles,” Mr. Peebles added.

“With our commitment to Angels Landing, we are committing to the future of downtown Los Angeles. Despite the millions of dollars expended so far to keep our project on-track, and notwithstanding the strong pandemic-induced recessionary pressures on L.A.’s economy, we continue to push hard to make our plans for Angels Landing a reality. Having recently completed our Park Fifth apartment complex, a two-building development adjacent to Pershing Square, Angels Landing represents our continued faith in the economic future of downtown Los Angeles,” Mr. MacFarlane said.

Mr. Peebles said, “2020 was a trying year for nearly every sector in the business world. And the first three quarters of 2021 may be equally challenging. But we’ve faced big challenges in the past and always managed to prevail. The success of our development businesses is a testament to our drive and commitment to build projects that improve the quality of life in the communities where they’re built.”

Mr. MacFarlane said, “The economic impact of the coronavirus pandemic has been significant this year. Some of those negative economic impacts, such as lagging job growth, are projected to extend well into 2021. But pessimistic economic indicators and projections have not shaken our resolve to build Angels Landing. We’re making our investment to create new jobs for L.A. area residents. We’re confident Angels Landing will help the L.A. economy rebound and gain strength. Angels Landing will create thousands of jobs that will result in millions of dollars circulating throughout the L.A. region providing a needed boost to small businesses.”

MacFarlane Partners has provided real estate investment management services to institutional investors via commingled funds and separate accounts since 1987. MacFarlane Partners has managed real estate separate accounts on behalf of more than 25 institutional investors, including the AFL-CIO Building Investment Trust, the California Public Employees' Retirement System, the Sacramento County Employees' Retirement System, the Teacher Retirement System of Texas, and the pension plans of AT&T, General Motors, United Technologies and Verizon. MacFarlane Partners focuses exclusively on investments that promote smart growth, urban revitalization and sustainability in urban and high-density suburban submarkets of select "Gateway Cities" within the United States with the objective to achieve investment success while making a difference in the communities in which we invest.

About The Peebles Corporation

The Peebles Corporation is a privately held national real estate investment and development company specializing in residential, hospitality, retail and mixed-use commercial properties. The company has corporate offices in New York City, Miami, and Washington D.C. Founded in 1983 by Don Peebles, the company has become an industry leader with a portfolio of active and completed developments totaling more than 10 million square feet and $8 billion in the gateway cities of New York, Boston, Philadelphia, Washington D.C., Charlotte, Miami, San Francisco, and Los Angeles. Through construction excellence, sustainable practices, historic preservation and innovative design, every project is strategically selected to achieve transformative results for the company and community.