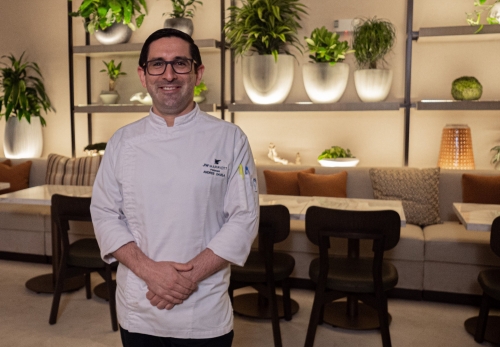 Davila brings 22 impressive years of culinary experience to this position, including 11 years with the Marriott family. Prior to calling Aruba his new home, Davila held the position of executive sous chef for the Marriott Beach Resort in Grand Cayman, and executive chef for JW Marriott Panama where he managed a team of 70 and oversaw operations for multiple restaurants that underwent various rebranding, openings, and new menu developments under his supervision. Before Davila joined Marriott, he seasoned his portfolio with experiences at boutique, five-star hotels and prestigious yacht companies spanning the globe from Ecuador to Panama and beyond.

“My culinary philosophy is that dishes are nourished by the experiences that a chef has lived,” said Davila. “I have been fortunate to travel the world, developing my knowledge of different spices, cultures and cuisines. I’m eager to work with the amazing team at the Aruba Marriott Complex and infuse what I’ve learned over the years to help them find their unique style and passions in the kitchen and further propel them towards culinary success.”

Davila studied culinary arts and hospitality management at the International Buenos Aires Hotel & Restaurant School in Argentina and earned his Sommelier certification from Universidad San Francisco de Quito. Davila has competed and won various awards in international competitions and fairs throughout his career, such as the 2017 Truffle World Cup in Soria, Spain, and the Sial Fair in Montreal, #Ecuadoreats Masterclasses in Toronto, and among others.