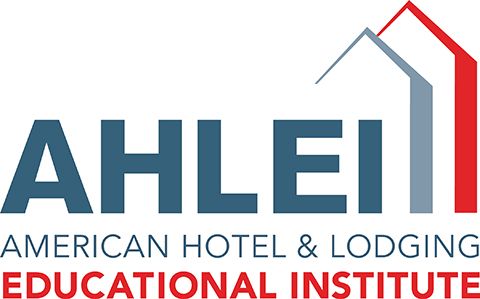 Orlando, Florida, July 2014-The American Hotel & Lodging Educational Institute (AHLEI), the training and educational arm of the American Hotel & Lodging Association (AH&LA), has unveiled a new logo that reflects the overall re-branding of the association and its affiliates. The new AHLEI logo echoes the design of the logo that AH&LA introduced in June. The association’s new graphic identity illustrates AH&LA’s new membership and advocacy model launched in January 2014 and reflects the dynamism and focus of the organization.

As part of its re-branding, the Educational Institute will use “AHLEI” as its preferred acronym, as reflected in the new logo. AHLEI has also adopted “Educate, Develop, Certify” as its new tagline, highlighting AHLEI’s mission to provide educational resources for schools, professional development programs for those working in the hospitality industry, and professional certification for employees at every level of hospitality.

The American Hotel & Lodging Educational Institute has been providing hospitality education and training resources for more than 60 years as a member benefit of AH&LA. The organization is headquartered in Orlando, Florida, with a second U.S. office in Lansing, Michigan. AHLEI also has two international offices in India and China.

To learn more about the Educational Institute, visit www.ahlei.org.