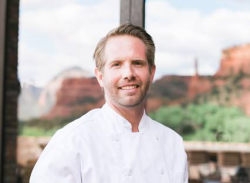 (IRVINGTON, VA; August 13, 2019) – The Tides Inn—an iconic coastal resort located in Irvington, Virginia—announces today the appointment of its new Executive Chef Alex Pasco, following the debut of Fish Hawk Oyster Bar, the resort’s newest waterfront eatery. Bringing over 10 years of industry expertise and a passion for supporting local purveyors, Pasco joins the team prepared to elevate the guests’ culinary experience, immersing them in local tradition and showcasing the unique fare of Virginia’s Northern Neck. Pasco’s passion and vision for the Tides Inn promises a seamless evolution of the resort’s food and beverage program, as he works with the team to create robust menus and apply a fresh perspective to the Tides Inn’s time-honored traditions.

In his role, Pasco will helm Fish Hawk Oyster Bar and Chesapeake Restaurant Bar & Terrace, both renowned for their tide-to-table cuisine, immersion in authentic regional flavors and picturesque, al fresco dining. He will also oversee the Golden Eagle Grill, offering a range of classic, American fare located in the Golden Eagle Golf Course Clubhouse. Fish Hawk was introduced earlier this summer, offering a selection of coastal classics, outdoor oyster roasts, and raw bar featuring a rotation of locally sourced oysters and an extensive wine, beer and cocktail menu. Pasco’s innovative approach to cuisine and dedication to providing guests with an authentic dining experience will help shine a light on Irvington as an emerging culinary destination.

“I am humbled to join the team at such a beloved, timeless resort that’s undergoing an exciting evolution with the debut of Fish Hawk and new guest programming,” Pasco says. “In this role, I plan to continuously advocate for the support of local vendors to share the region’s freshest ingredients from oysters to produce, while weaving in new and creative approaches that will showcase the best of the Chesapeake.”

Before joining the team at Tides Inn, Pasco held the title of Chef de Cuisine at Enchantment Resort in Sedona, Arizona, championing the use of native ingredients to produce ingredient-forward and experimental dishes for the resort’s menus. Pasco also worked as Head Chef at Mii amo in Sedona where he crafted innovative, mindful cuisine at the destination spa named #1 in the U.S. by Travel + Leisure magazine. Prior to his time in Sedona, he worked alongside Michelin-starred chef Matthew Dolan at 25 Lusk in San Francisco. These diverse experiences nurtured Pasco’s ability to think creatively in his menu development and manage a food and beverage program in an effective and supportive manner.

About The Tides Inn