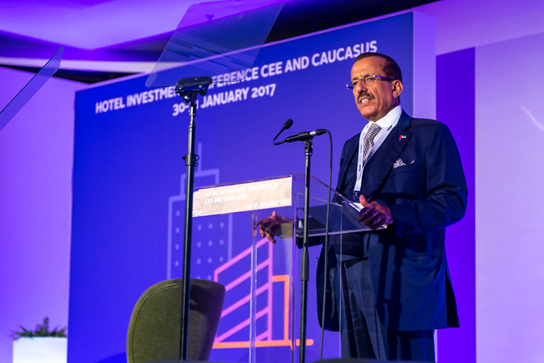 The event, which had over 70 speakers and 350 delegates from 35 countries, brought together the hotel investment, financing, ownership and hotel brand and operating community for the first time in the region.

Chairman Khalaf Ahmad Al Habtoor was asked to deliver the keynote as his group is a significant investor in the region, owning the InterContinental Budapest and the Ritz-Carlton Budapest hotels as well as two office buildings, the Rumbach Centre and Dorottya Udvar.

He said Hungary to be a good investment destination for foreign investors over the more traditional markets in Europe, which he believes have peaked. “The return on investment is more lucrative in Hungary than other parts of Europe,” he said, adding that the established markets have too much red tape. The Chairman said that investors are attracted by the business friendly and politically stable environment, Hungary’s central location as well as tax benefits and other incentives.

Marius Gomola, Managing Director of Horwath HTL, Hungary and the conference organizer said, “We were honored to have the Chairman speak at our event. His positive words about market conditions in Hungary, as well as his investments, only serve to emphasize the recovery in the region and will give other investors the comfort to follow his lead.”

Horwath HTL (Hotels Tourism and Leisure) is the world’s largest and most experienced Hotel, tourism and leisure-consulting brand, with 45 offices in 39 countries. Horwath HTL provides unequalled expertise for clients around the world, always providing the highest level of service to our clients.

Over the last 25 years, Horwath HTL Hungary has gained extensive market knowledge through involvement in hundreds of projects in the CEE, CIS, Russia and Caucasus region.