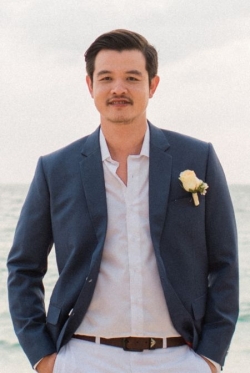 Eugene, who joins the company on 16th September 2019, has a strong background in the hospitality industry and speaks five languages: English, Malay, Mandarin, Cantonese and Hokkien. With more than 20 years of experience in Asia and the West, he is uniquely positioned to drive the development of an ambitious and fast-growing Asian hospitality business.

Having graduated from the University of Michigan, Eugene’s career commenced in the USA with New Great Wall Corp, a major F&B business, where he was instrumental in introducing new Asian dining concepts into the American market. As Pre-Opening & Opening Manager, he successfully grew the Genghis Khan Mongolian BBQ chain in the US, overseeing everything from contract negotiations and restaurant construction to staff recruitment and menu creation. By 2010, he had worked his way up to the position of Assistant General Manager of New Great Wall Corp, handling the daily operations of a multi-million dollar business.

In the following years, Eugene established himself in executive positions with global F&B companies such as Outback Steakhouse and Compass Group in the US, before he moved back to his native Malaysia to become Group General Manager for Secret Recipe, where he was tasked with executing a multi-brand expansion across Malaysia, Indonesia and Singapore.

Most recently, Eugene worked for Wine Collection in Thailand, initially as Operations Manager and later as Country Director of Operations, leading the group’s entire Thailand operations, covering 31 restaurants and 55 retail stores. He now bring his lifetime of expertise to AKARYN Hotel Group, where he will report directly to the company’s pioneering founder and Managing Director, Anchalika Kijkanakorn.

“I am delighted to welcome Eugene to AKARYN Hotel Group,” said Ms Kijkanakorn. “As we enter an exciting new phase of development, he has many of the skills that will help drive the growth of our business into new markets. In the coming months, two of our much-loved hotel concepts will make their international debuts, with Aleenta being introduced to Bali and akyra arriving in Vietnam. This will undoubtedly set the ball rolling for future investments, and with Eugene’s skills, we will be able to maximise the many advantages of being a strong and independent hotel company in Asia’s thriving hospitality sector.”

AKARYN Hotel Group currently operates a collection of six luxury boutique hotels and resorts in Thailand, located in Bangkok, Chiang Mai, Phuket and Hua Hin. The company will make its international debut in 2020, with the launch of Aleenta Wellness Retreat Bali, followed by the opening of akyra Hoi An in 2021. It is also in the process of building its domestic portfolio in Thailand, with akyra Rattanakosin Bangkok scheduled to launch in 2020 and Aleenta Wellness Retreat Chiangmai on track to make its debut in 2022.

In future, the company will continue to seek opportunities to expand Aleenta, its exclusive and intimate resort concept, and akyra, its cutting-edge boutique brand. Negotiations are already underway on at least three other properties, which are expected to be concluded by the end of this year. Under the group’s deep commitment to sustainability, every new hotel or resort opened by AKARYN Hotel Group will be 100 percent free of single-use plastics.

AKARYN Hotel Group specialises in the management of small luxury resorts in South-east Asia and is the owning and management company for Aleenta Phuket-PhangNga (aleenta.com/Phuket) and Aleenta HuaHin-Pranburi (aleenta.com/HuaHin). AKARYN Group also operates the akyra Manor Chiang Mai (theakyra.com/Chiang-Mai), akyra Thonglor Bangkok (theakyra.com/bangkok/) and the akyra Beach Club Phuket (theakyra.com/Phuket), and akyra TAS Sukhumvit Bangkok (https://www.theakyra.com/bangkok/sukhumvit) The Pure Blue Foundation (purebluefoundation.com), established in 2010 by AKARYN Hotel Group, is a charitable foundation supporting marine conservation and community projects throughout Thailand. In September 2015, founder and director Anchalika Kijkanakorn was named as a Hero of Philanthropy by Forbes Asia in recognition of her dedication to supporting valuable conservation efforts.