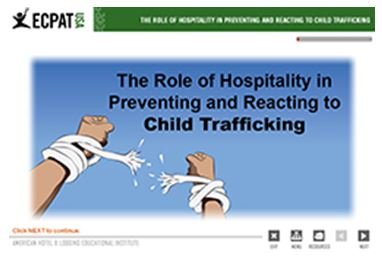 Orlando, Florida, August 2015 – The American Hotel & Lodging Educational Institute (AHLEI) and Interstate Hotels & Resorts announce the recent launch of AHLEI’s human trafficking awareness training into Interstate’s mandatory training curriculum for front-line associates and managers at more than 300 hotels in the U.S. “The Role of Hospitality in Preventing and Reacting to Child Trafficking” is an online program developed in partnership with ECPAT-USA that provides hotel staff and managers with the information they need to identify and respond to crimes of human trafficking and commercial sexual exploitation of children (CSEC).

“The safety of our guests and associates is always top of mind for Interstate,” said Laura FitzRandolph, Interstate’s chief human resources officer and assistant general counsel. “This training not only aligns with our core values of acting with integrity and treating others with respect, but also gives those associates and leaders who may be in a position to see potentially illegal trafficking activity the tools they need to respond actively and appropriately to the situation.”

Interstate is offering the training online through CourseLine®, AHLEI’s learning management system, and is also providing a printed version available in English or Spanish to maximize the training reach for all associates.

“The Role of Hospitality in Preventing and Reacting to Child Trafficking” was introduced to Interstate properties in late June and training is now included as part of Interstate’s new hire orientation. FitzRandolph noted that while mandatory for front-line employees, many general managers and top-level executives have taken the training as well because it is such an important issue.

“Human trafficking is the second-largest criminal industry in the world, and it happens in cities and suburbs all over the United States. If the need arises, we want our associates to be prepared,” said FitzRandolph. “It is vitally important for hotel associates both in our US-based hotels and around the globe to be able to recognize and respond to human trafficking.”

Established in 1953 as the nonprofit education and training arm of the American Hotel & Lodging Association (AH&LA), AHLEI's mission is to continue being the preferred provider to the lodging industry, hospitality schools, and related hospitality industries by developing and providing quality resources to educate, develop, and certify hospitality professionals worldwide.