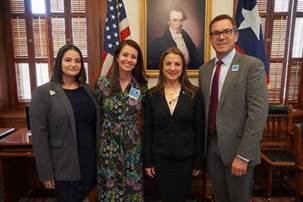 Austin, TX (October 17, 2019) – As the hotel industry continues its fight against human trafficking, the American Hotel & Lodging Association (AHLA) co-sponsored the Texas Businesses Against Trafficking (TBAT) Partnership Forum at the State Capitol, hosted by the Secretary of State Ruth R. Hughs’ Office. The event, which brought together government officials and industry partners in a shared mission, marked the next stop in a nationwide tour of No Room for Trafficking regional events to raise national awareness of the industry’s long-standing legacy and commitment to preventing human trafficking.

In alignment with the event, AHLA aired a public service announcement (PSA) across Austin and Houston spotlighting the industry’s work and continued commitment to ending the scourge of human trafficking through AHLA’s No Room for Trafficking campaign, which unites the industry around one comprehensive approach to combat trafficking.

“Traffickers exploit all levels of the tourism supply chain and this fight will take collaboration and coordination across all levels of the travel sector. We were proud to join Secretary of State Hughs, TBAT and our industry partners yesterday as we work hand in hand to put an end to human trafficking,” said Chip Rogers, president and CEO of AHLA. “We all have an important role to play in combatting trafficking everyday through raising awareness, coordination with law enforcement and ongoing workforce training, and we look forward to enhancing our efforts through partnerships here in Texas.”

Members representing the travel industry, including the Texas Hotel & Lodging Association (THLA), the Asian American Hotel Owners Association (AAHOA), G6 Hospitality and American Airlines, as well as human trafficking prevention organizations ECPAT-USA and A21 provided insight into the many ways businesses are educating and raising awareness among employees.

“The crime of Human trafficking can affect anyone, male or female, young or old, and businesses in Texas are joining together to take a stand. Texas Businesses Against Trafficking was founded by our office to unite industries in our shared mission to end the scourge of human trafficking, and we are so grateful to the hotel industry for joining TBAT’s fight. We look forward to continuing to expand our membership to represent all sectors of the travel industry,” said Texas Secretary of State Ruth Hughs.

The event is part of a wave of regional events following the launch of AHLA’s No Room for Trafficking campaign, which builds upon the hospitality industry’s longstanding commitment to the fight against human trafficking by educating and training every hotel worker.  By partnering with lawmakers, human trafficking prevention partners and the travel sector, these events will raise public awareness and facilitate collaboration with government, law enforcement and hoteliers on best practices for policies, procedures and training to enhance our human trafficking prevention efforts.  Already each year, thousands of hotel employees are trained on how to identify and stop trafficking, and this campaign unites the industry around the shared goal to end human trafficking.

“Hotels across Texas are joining the fight to end trafficking through our partnership with TBAT, and we will continue to deliver leadership and engagement of the hotel and travel industry on this vital issue,” said Scott Joslove, president and CEO of THLA.  “We look forward to working alongside elected officials and our partners in the law enforcement to eradicate these heinous crimes.”

“We believe all industries have to work together to combat trafficking. By working together with our partners in the hospitality industry and engaging with companies across different sectors, we can more effectively fight back against trafficking and exploitation in all its forms,” said Ama Romaine, General Counsel and Chief Compliance Officer, G6 Hospitality, the parent company of Motel 6 and Studio 6.

The hotel industry has long recognized the critical role it plays in ending human trafficking, and through innovative techniques and employee training, it has played an instrumental role in identifying, reporting and stopping instances of human trafficking.

The American Hotel & Lodging Association (AHLA) is the sole national association representing all segments of the U.S. lodging industry and contributes nearly $660 billion to U.S. GDP.  Headquartered in Washington, D.C., AHLA focuses on strategic advocacy, communications support and workforce development programs to move the industry forward.  Every day, America’s hotels make dreams come true, not just for our guests, but also for the 8.3 million people whose jobs we support – more than one in every 25 American jobs.  Learn more at www.ahla.com.