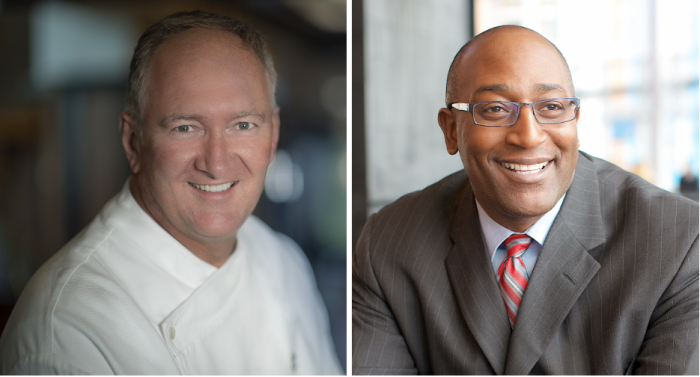 Having longstanding roots with AHC Hospitality and demonstrated track records of success, Huber and Jemison lend invaluable perspectives on the culinary industry as AHC Hospitality grows and expands its already robust food and beverage programming.

Beginning his culinary career in Austria at age 16, Huber joined the AHC Hospitality family in 1997 and has held his position of corporate executive chef for over two decades. In his new role, Huber will lead and manage all food and beverage operations of AHC Hospitality’s third-party managed properties, including Peter Island Resort and Spa in the British Virgin Islands, Hotel St. Regis in Detroit, Ruth’s Chris Ann Arbor, Brownwood Hotel and Spa and Waterfront Inn in The Villages, Fla.

“Chef Josef’s decades of experience and contagious passion for his craft makes him the ideal candidate to lead the food and beverage operations of AHC Hospitality’s managed properties outside of Grand Rapids,” said George Aquino, vice president and managing director of AHC Hospitality.

Celebrating 30 years with AHC Hospitality this year, Jemison joined the Amway Grand Plaza, Curio Collection by Hilton team in 1990 as an assistant executive steward before discovering his passion for the culinary arts. In 1996, following a brief stint with Peter Island Resort and Yacht Harbor, he was named the assistant manager of food and beverage of Amway Grand Plaza. When AHC Hospitality embarked on opening the JW Marriott Grand Rapids eleven years later, Jemison was promoted to director of food and beverage and held the position for almost a decade. In 2017, he was promoted to director of food and beverage projects and procurement for AHC Hospitality. Jemison’s new role will allow him to work in conjunction with the vice president of food and beverage to oversee the day to day operations of the five downtown Grand Rapids properties while continuing to be the procurement specialist for new projects.

“Having spent the past three decades with AHC Hospitality, Darin has witnessed the evolution of Grand Rapids’ culinary scene and played an integral role in expanding our company’s culinary capabilities and developing its extensive food and beverage program,” said Gerhard Schmied, vice president of food and beverage, AHC Hospitality. “With Darin at the helm of all regional operations, Grand Rapids will further solidify itself as a gastronomic destination.”

AHC Hospitality  is a management company specializing in customized hospitality solutions for a portfolio of major hotel and restaurant brands including Marriott International, Hilton Hotels & Resorts, Preferred Hotels & Resorts, Hyatt Hotel Corporation, Wolfgang Puck Worldwide, Ruth’s Hospitality Group and more. AHC Hospitality has a proven track record of identifying and implementing operational and revenue-generating efficiencies for its collection of top-performing hotels and restaurants through the creation of innovative alternatives to the traditional hospitality experience.