Atlanta – May 30, 2018 – Based on better than expected first quarter performance, CBRE Hotels’ Americas Research (CBRE) has enhanced its outlook for 2018. According to STR, U.S. hotels enjoyed a 3.5 percent increase in revenue per available room (RevPAR) during the first quarter of 2018, exceeding the 2.5 percent RevPAR gain expected by CBRE for the period. Accordingly, CBRE now is forecasting a 2.8 percent annual increase in RevPAR for U.S. hotels in 2018, a 0.3 percentage point enhancement over the 2.5 percent mark published in CBRE’s March 2018 Hotel Horizons® report.

“We continue to be impressed by the ability of the U.S. economy to support demand growth for accommodations away from home,” said R. Mark Woodworth, senior managing director of CBRE Hotels’ Americas Research. “Helped by an expanding economy, first quarter 2018 lodging demand grew at 3.0 percent, a full 1.1 percentage points greater than anticipated. This sustains 33 consecutive quarters of demand growth, a streak that started in the first quarter of 2010.”

Given the strong first quarter performance, CBRE’s 2018 annual forecast for growth in lodging demand has increased from 1.8 percent in its March forecast report to 2.1 percent in the June edition. With the nation’s lodging supply forecast to grow by 2.0 percent, this now flips the occupancy projection from a 0.1 percent decline to an increase of 0.1 percent. “Looking toward 2019, we foresee another year of occupancy growth. This will mark 10 consecutive years of increases in occupancy and five consecutive years of record occupancy levels,” Woodworth noted. 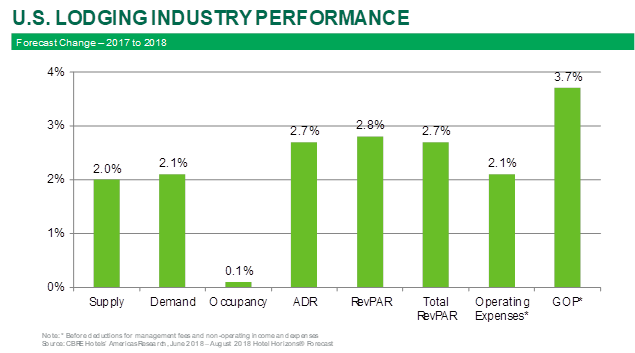 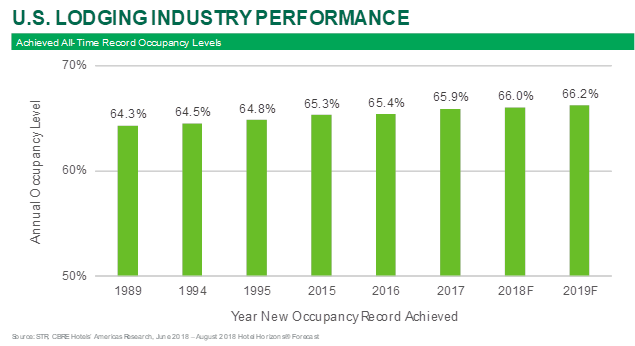 “With sustained record occupancy levels, we also are starting to see the return of some pricing power for U.S. hoteliers,” said John B. (Jack) Corgel, Ph.D., professor of real estate at the Cornell University School of Hotel Administration and senior advisor to CBRE Hotels’ Americas Research. “Ever since the U.S. lodging industry achieved a new all-time high occupancy level in 2015, we have observed a slowdown in the pace of annual changes in average daily room rates (ADR). This is counterintuitive to basic economic principles. However, based on the strong performance observed during the first quarter of 2018, we are forecasting a 2.7 percent annual increase in ADR for 2018. This is greater than the 2.1 percent annual change in ADR during 2017.”

The impacts of hurricanes Harvey and Irma that hit Texas and Florida during late summer 2017 impacted year-over-year changes in U.S. hotel performance. As noted before, lodging demand increased during the first quarter of 2018 at a pace of 3.0 percent. Yet by years end, CBRE is forecasting the annual increase to be just 2.1 percent. “As a result of the hurricanes, we saw a 3.7 percent increase in demand during the fourth quarter of 2017. This was generated by displaced citizens in need of shelter, as well as rescue workers, remediation crews and insurance adjusters in need of lodging. Barring another unforeseen significant event, we do not believe this level of demand growth can be sustained in the fourth quarter of 2018. That, combined with the high occupancy levels traditionally achieved during the summer months, puts a seasonal cap on the potential for demand growth during the last three quarters of the year,” Corgel observed.

Impact from the 2017 hurricanes also can be seen in the 2018 forecasted performance of individual markets. However, the impact will be different between Texas and Florida. For 2018, CBRE is forecasting declines in both occupancy and ADR for hotels in the Houston lodging market. Conversely, four Florida markets (West Palm Beach, Miami, Orlando and Jacksonville) are projected to achieve the greatest annual increases in ADR among the 60 markets in the Hotel Horizons® universe.

“In general, the supply of available hotel rooms in the Houston market was less impacted by Hurricane Harvey, compared to Florida where Hurricane Irma caused a number of properties to remain closed through the first quarter of 2018. Therefore, in Houston, the occupancy and ADR boost received in 2017 will not be matched in 2018. Conversely, the lingering closure of hotels in Florida has helped sustain the hurricane-related occupancy and ADR increases into the 2018 first quarter busy season. This will have a positive impact on their annual performance,” Woodworth said.

“We are bullish on the performance of U.S. hotels during 2018 and the depth of the fundamentals supporting our forecast. The continual achievement of record occupancy levels, combined with improved ADR growth, should provide all industry participants with a sense of comfort. The magnitude of revenue and profit growth may not be spectacular, but it appears to be very sustainable,” Woodworth concluded.

The June 2018 edition of Hotel Horizons®for the U.S. lodging industry and 60 major markets can be purchased by visiting: https://pip.cbrehotels.com