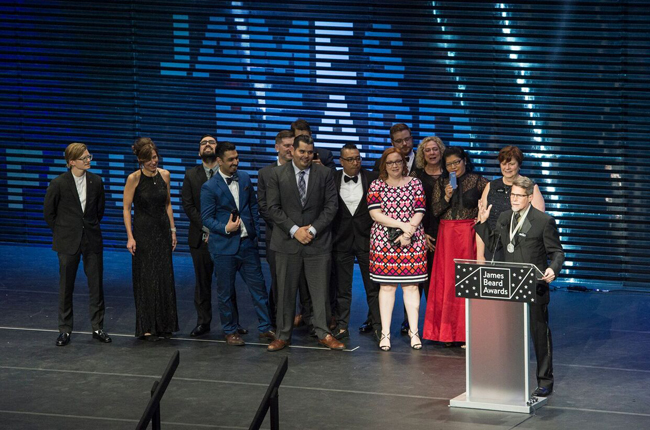 NEW YORK, NY (May 2, 2017) – Winners were revealed Monday, May 1, 2017 at the 2017 James Beard Foundation Awards at Lyric Opera of Chicago. During a ceremony hosted by Emmy Award-nominated actor Jesse Tyler Ferguson, awards in the Restaurant and Chef and Restaurant Design categories were presented, as well as a number of special achievement awards, including Who’s Who of Food & Beverage in America, Lifetime Achievement, Design Icon, America’s Classics, and Humanitarian of the Year. Winners of the Foundation’s annual Media Awards were presented on April 25, 2017, at a ceremony and dinner at Pier 60 at Chelsea Piers in New York City, hosted by James Beard Award winner, chef, writer, and television personality Andrew Zimmern. A complete list of award winners announced on May 1 can be found at the end of this release. Results from both events can be found at jamesbeard.org/awards.

Industry leaders from across the country attended the highly anticipated ceremony where the theme of the evening was “Powered by Food,” which celebrated the thrilling ways that technology has strengthened our connections through food, from the blog post that sparks a trend, to the Instagram that inspires us, and the shared images that become our portal to cuisine from far afield. The gala reception chefs, consisting of former James Beard Foundation Award recipients and nominees, shared their cuisine with nearly 2,000 attendees.

Established in 1990, the James Beard Awards recognize culinary professionals for excellence and achievement in their fields and furthers the Foundation’s mission to celebrate, nurture, and honor chefs and other leaders making America's food culture more delicious, diverse, and sustainable for everyone. Each award category has an individual committee made up of industry professionals who volunteer their time to oversee the policies, procedures, and selection of judges for their respective Awards program. All JBF Award winners receive a certificate and a medallion engraved with the James Beard Foundation Awards insignia. There are no cash prizes.

76 Seats and Over (For the best restaurant design or renovation in North America since January 1, 2014) Firm: Meyer Davis Designers: Will Meyer, Gray Davis, and Katie McPherson Project: St. Cecilia, Atlanta

Best New Restaurant (Presented by True Refrigeration®) A restaurant opened in the calendar year before the award will be given that already displays excellence in food, beverage, and service, and that is likely to make a significant impact in years to come. Le Coucou NYC

Outstanding Baker A chef or baker who prepares breads, pastries, or desserts in a retail bakery, and who serves as a national standard-bearer of excellence. Must have been working as a baker or pastry chef for at least five years. Mark Furstenberg Bread Furst Washington, D.C.

Outstanding Chef (Presented by All-Clad Metalcrafters) A working chef in America whose career has set national industry standards and who has served as an inspiration to other food professionals. Must have been working as a chef for the past five years. Michael Solomonov Zahav Philadelphia

Outstanding Pastry Chef (Presented by Lavazza) A chef or baker who prepares desserts, pastries, or breads in a restaurant, and who serves as a national standard bearer of excellence. Must have been working as a pastry chef or baker for the past five years. Ghaya Oliveira Daniel NYC

Outstanding Restaurant (Presented by S.Pellegrino® Sparkling Natural Mineral Water) A restaurant in the United States that serves as a national standard bearer of consistent quality and excellence in food, atmosphere and service. Must have been in operation 10 or more consecutive years. Topolobampo Chicago

Outstanding Restaurateur A working restaurateur who sets high national standards in restaurant operations and entrepreneurship. Must have been in the restaurant business for at least 10 years. Must not have been nominated for a James Beard Foundation chef award in the past five years. Stephen Starr Starr Restaurants (Le Coucou, Serpico, Upland, and others) Philadelphia

Outstanding Wine Program (Presented by Robert Mondavi Winery) A restaurant in operation five or more years that serves as a standard bearer for excellence in wine service through a well-presented wine list, knowledgeable staff, and efforts to educate customers about wine. Canlis Seattle

Rising Star Chef of the Year (Presented by S.Pellegrino® Sparkling Natural Mineral Water) A chef age 30 or younger who displays an impressive talent and who is likely to make a significant impact on the industry in years to come. Zachary Engel Shaya New Orleans

Best Chefs Chefs who have set new or consistent standards of excellence in their respective regions. Eligible candidates may be from any kind of dining establishment and must have been working as a chef for at least five years, with the three most recent years spent in the region.

About the James Beard Foundation (JBF) 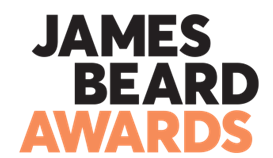 Founded in 1986, the James Beard Foundation celebrates, nurtures, and honors chefs and other leaders making America's food culture more delicious, diverse, and sustainable for everyone. A cookbook author and teacher with an encyclopedic knowledge about food, the late James Beard was a champion of American cuisine. He helped educate and mentor generations of professional chefs and food enthusiasts, instilling in them the value of wholesome, healthful, and delicious food. Today JBF continues in the same spirit by administering a number of diverse programs that include educational initiatives, food industry awards, scholarships for culinary students, publications, chef advocacy training, and thought-leader convening. The Foundation also maintains the historic James Beard House in New York City’s Greenwich Village as a “performance space” for visiting chefs. For more information, please visit jamesbeard.org. Get food news, recipes, and more at the James Beard Foundation’s blog, or subscribe to the free digital newsletter Beard Bites. Follow @beardfoundation on Facebook, Twitter, Instagram, Pinterest, and Snapchat. Watch the James Beard House Kitchen Cam, James Beard Awards, and more on the Foundation’s Livestream channel. Find more JBF-related video on the Foundation’s YouTube channels.